The Palace Hotel in Jerusalem: History beyond Memory

Less than a kilometer west of Jerusalem’s Jaffa Gate, outside the walls of the Old City, an impressive four story building stands, occupying almost an entire block adjacent to the Muslim mamilla (Arabic: 'ma’man allah’) cemetery.

Today, the building is owned by the Hilton’s Waldorf Astoria luxury hotels chain. Those desiring an opulent stay in Jerusalem, and can afford it, can book a room there for a few hundred dollars per night. What most of them will not realise, however, is that they will be staying in a hotel whose construction was ordered by the Grand Mufti of Jerusalem in the British Mandate era, Hajj Amin Husseini.

Architecture bears at least a partial witness to this forgotten history. On top of the building’s narrow front facade, an ornamental plaque sits that reads, in Arabic, “this building was built by the Supreme Muslim Council in Palestine in 1929”. The placement of such plaques that attest to buildings’ owners and date of construction was common in nearly all Arab public buildings and even some private ones at the time.

Highlighting the unwritten story of this hotel, however, should not be relegated to the realm of a romanticised idea of what is lost, as it is common in much of the literature and social media writings that evoke images of pre-1948 Palestine. Such images, often drawn to reconstruct some idealised ‘collective memory’, in my opinion, obscure more than they reveal about the history of Palestine before 1948.

Turning to historical archives, both native and colonial, begins to unfold a more complex narrative of the story of this building and its role in the history of Palestine from the early 1930s onwards. The multilayered nature of this story deserves a full historical study, but for the purposes of this short commentary, I will mention a few elements that attest to this complexity.

The original building built by the Supreme Muslim Council was also intended to serve as a hotel, named the Palace Hotel. It was envisioned by the Council both as an economic investment and as a national project to maintain Arab presence in Jerusalem’s western extra-muros neighbourhoods, where most Zionist and British colonial construction activity was concentrated. It stood as an adversary and competitor to the equally monumental King David Hotel, built in 1931, on the same street.

The design for the building was completed by the two Turkish architects Ahmet Kemmaledin and his disciple Mehmed Nehad, who were also hired by the Supreme Muslim Council to renovate al-Aqsa Mosque. Its eclectic building style, therefore, was influenced by neo-Ottoman references but also Greco-Roman and Moorish elements. 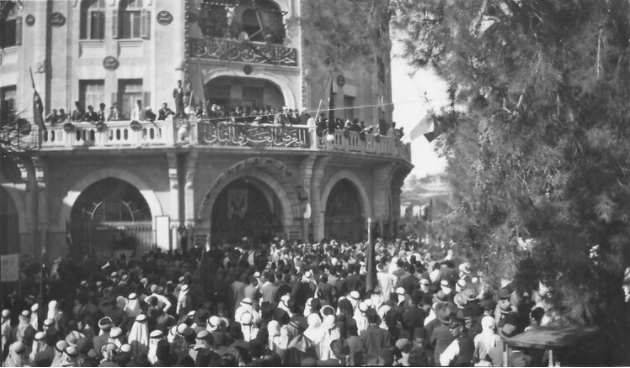 The building was quite significant in the history of the Palestinian national movement. When Palestinians organised the 1931 and 1932 Arab National Exhibitions intended to showcase the industrial and agricultural advancements of the Arab world and foster inter-Arab economic relations in an era of colonialism, after several debates, they decided to hold them at the Palace Hotel.

But the story of the Palace Hotel in the Mandate era was far from uncontested, including among Arab circles. One of the reasons for contestation was a debate as to whether the hotel was built on a property that was part of the Muslim ma’man allah cemetery. The other, later one, was the mismanagement of the hotel and its finances by the Supreme Muslim Council, leading to its eventual rental/purchase by the British administration.

Architectural plans of the hotel as it was repurposed by the British administration reveal the location of multiple official departments there (It is also in this period that the building housed the offices of the Huna al-Quds broadcasting station). Gradually, the same building that was intended to serve Palestinian national aspirations was being repurposed to become a colonial building par excellence. 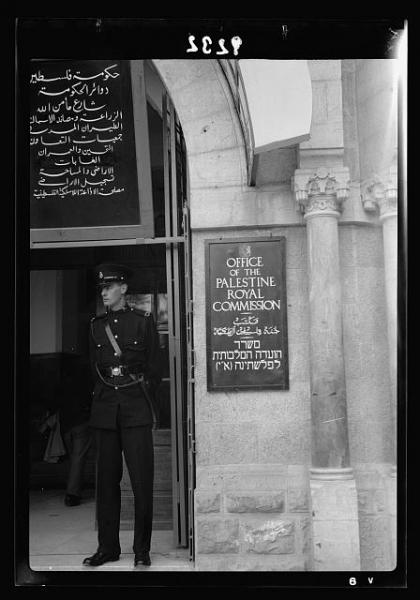 Entrance of the Palace Hotel, serving as the office of the Palestine Royal Commission, 1936. Source: American Colony Photo Collection, Library of Congress. Accessed from https://www.loc.gov/pictures/item/2019709012/

Perhaps the most symbolic episode for the building’s colonial legacy was when it was chosen as the location for the offices of the 1936 Peel Commission appointed to investigate the events of the 1936 Great Palestinian Revolt against British colonial policies and their endorsement of Zionist settler colonialism. It was in this building, therefore, that the lines of the 1937 Partition Plan for Palestine were drawn. Papers in the Central Zionist Archives even point to the installation of recording devices by the Zionists in the building to spy on the Commission’s meetings.

The mere surveying of these overlapping historical trajectories, and the tensions between them, begin to reveal the multilayered nature of buildings and the transformations in the urban sphere in pre-1948 Palestine - trajectories that require not merely a lamentation over a lost past, but a critical re-narration of history.

There is something satisfyingly grotesque about the condition of the image of the Palace Hotel from the Library of Congress, displayed at the beginning of this commentary; half burnt and obscured. This is how we should approach pre-1948 history; always partial and incomplete, never idealised.

This article was first published on the author's blog.