A Special Issue: Palestine from Above I

This special issue of the Jerusalem Quarterly is one of two issues (JQ 81 and JQ 82) devoted to the theme “Palestine from Above” which examines observing the Holy Land from the skies. It explores how the technology of mapping and imaging has been used to depict the Palestinian landscape from various elevations for a variety of uses: mapping, surveillance, art, planning, and other areas.

Contributions tackle issues that vary from image representation of Palestine and its geography, to the notion of what is of interest and disinterest in the eye of the colonial power versus what is not represented or captured and why. In this issue contributors examine uses of aerial photography to document railways, military installations, airports, roads, and other infrastructure; unpacking urban planning paradigms through images; and scrutinizing the issue of transformation of the landscape, and its natural/human causes. Several essays focus on technologies of surveillance and intelligence that have been developed historically to map and collect sensitive visual material that will eventually ensure ground control.

The two issues (JQ 81 and JQ 82) are guest-edited by Yazid Anani, lecturer of architecture at Birzeit University and art curator at the Abdul Muhsin al-Qattan Foundation. The publication of the second volume will coincide with an international exhibition at the Qattan Foundation curated by Yazid Anani in cooperation with Salim Tamari and Zeynep Çelik on the theme of “Palestine From Above,” in which Palestinian and international artists, mapmakers, and photographers will look at many of those themes from a creative perspective. Al-Qattan “Palestine From Above” focuses on the two themes of hegemony and perspective in examining how the ongoing revolution of visual and sensorial technology contributed to redefining and re-controlling the Palestinian landscape and its future.

JQ 81 is currently online and is scheduled to be printed later in the summer. 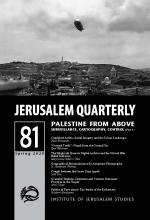