Blincoe, More Noble Than War: A Soccer History of Israel-Palestine 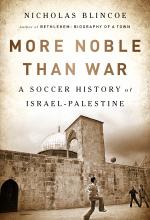 Sports and politics do not, and should not, mix. Or so goes the tired cliché. Yet this has always been an absurd stance. There is a long history of sports being used by repressive regimes as a vehicle for normalization and also by their challengers as a venue for political protest and activism. Nicholas Blincoe's fascinating and accessible new book, More Noble Than War: A Soccer History of Israel-Palestine, traces the history of soccer in Palestine/Israel while exploring the history of the conflict. Through a mixture of historical research, interviews, and firsthand reporting, Blincoe clearly demonstrates how soccer and politics have been intimately linked from the sport's introduction to Palestine by the British up to the present day.

Blincoe is not new to the subject of Palestine/Israel. He is the author of Bethlehem: Biography of a Town (Constable, 2017), coeditor of Peace under Fire: Israel/Palestine and the International Solidarity Movement (Verso, 2004), and coproducer of the documentaries Jeremy Hardy vs. the Israeli Army (2003) and Open Bethlehem (2014). However, this is his first book about soccer. Blincoe describes becoming a soccer fan in 2004 while living in Palestine, following the English Premier League as a way to deal with homesickness. This led to him taking an interest in the local game, the result of which is More Noble Than War.

Part 1, which makes up the majority of the book, focuses on the parallel, and sometimes intertwined, development of soccer in Palestinian and Jewish communities before 1948. The first standing team in Palestine was at St. George's School in Jerusalem in the early 1900s. Early members of the school's team included Izzat Tannous and Jamal al-Husseini, who would later achieve political prominence. Blincoe then takes the reader through historical developments such as the role of Yosef Yekutieli in the Maccabi Games and successful Jewish efforts to gain international recognition through soccer (and prevent Palestinians from doing likewise), the British banning the game following the 1929 riots, and the violent foundations of Beitar Jerusalem Football Club (“from the start, Beitar Jerusalem was a terrorist organisation that played football on the side,” p. 129).

Part 2 covers the period from 1948 up until the present day. In it, Blincoe discusses topics including the significance of Palestine joining soccer's global governing body, FIFA, in 1998 (“the first international body to recognise Palestine as a state,” p. 219); the disproportionate presence of Palestinians in Israeli soccer; the influence of controversial Palestinian official Jibril Rajoub on Palestinian soccer; and the struggles of Palestinian soccer in the face of Israeli occupation. Blincoe concludes by considering whether the soccer field, one of the few spaces where Jews and Palestinians regularly interact, provides a vision of what a shared future in Palestine/Israel could look like, although he rightly notes that “the level playing field … only goes so far” (p. 250).

Given soccer's global prominence, it is somewhat surprising that this book has not been written already. Certainly, many aspects of this history have been previously covered by other authors including Amir Ben-Porat, James M. Dorsey, Yair Galily, Issam Khalidi, James Montague, Magid Shihade, and Tamir Sorek. Yet Blincoe's contribution is to bring this history together into an overview that allows the reader to follow the development of soccer in Palestine/Israel from its beginnings to the present day, making the book a welcome addition to the field.

Covering over one hundred years of soccer and related political history in just over three hundred pages inevitably means that the book suffers from some notable omissions and limitations. Central among these is the failure to mention the Boycott, Divestment, Sanctions (BDS) movement and growing efforts to build pressure on Israel over its use of soccer (and other sports) as a tool of normalization. In chapter 27, Blincoe does cover moves to get Israel suspended from FIFA and calls for Argentina to boycott a game against Israel, but the focus is on the role of Rajoub with no mention of civil society involvement. On the subject of boycotts, Blincoe does not discuss the history of Israel's membership in the European soccer confederation, known as UEFA, which it joined in 1994 following boycotts by Arab and Asian nations. (Palestine plays in the more geographically relevant Asian confederation, of which Israel also used to be a member.) There are also only brief, passing mentions of women's soccer (in chapters 2 and 26). In addition, the book would have benefited from a deeper analysis of a range of issues. These include the significant impact of the Israeli occupation on Palestinian soccer (aspects of this such as restrictions on movement, arbitrary arrests, and deliberate targeting of players by the Israeli military are mentioned in chapter 26) and the intriguing situation of Palestinians who play for teams in Israel—and even for the Israeli national team (mentioned in chapters 23, 25, and 28).

Nevertheless, More Noble Than War remains an informative and thought-provoking read and represents a good entry point for anyone seeking to understand the history of soccer in Palestine/Israel. It lays the groundwork for further exploration of the topic in a subsequent contribution, one that covers the contemporary situation and the issues outlined above in greater detail.

Aubrey Bloomfield is an independent writer and researcher. He has written about the intersection of sports and politics, including the role of sports in the BDS movement, for a range of publications including Africa Is a Country, Al Jazeera English, Guardian Australia, Mondoweiss, The Nation, and Palestine Square.