Maira, Boycott! The Academy and Justice for Palestine 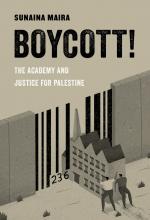 One of the great paradoxes that besets any intellectual attempting to disentangle the wider significance of contemporaneous events from the hegemonic discourses within which they would otherwise remain trapped is that such an effort necessitates a historical appraisal of the present moment. One is tasked not so much with putting the present in conversation with the past, but rather, thinking of the present as the past, thereby taking seriously Walter Benjamin's imperative to “brush history against the grain.” This is precisely what Sunaina Maira does with her latest volume, Boycott! The Academy and Justice for Palestine, one of the first intellectual histories of the growing scholarly movement advocating for a boycott of Israeli academic institutions. She argues that the Boycott, Divestment, Sanctions (BDS) movement has the potential to force academia as an institution to become truly accountable to its presumptions. Maira notes that individuals who criticize BDS as insufficiently radical miss the true character of the work BDS performs: the mobilization of institutional and juridico-legal precepts on their own terms to accommodate the Palestinian liberation struggle forces these logics either to acquiesce to sympathetic engagement with the question of Palestine or else crumble under the weight of their own hypocrisy. It is the ultimate litmus test of the notion that justice cannot be authentic unless it is truly comprehensive. The volume holds an important space in the larger archive of scholarship and activism for Palestine, as well as Palestine studies more broadly.

The author is a professor of Asian American studies at the University of California, Davis, and a longtime scholar-activist for Palestine who has written extensively on the Palestinian struggle, how the “war on terror” implicates Arab and South Asian subjects alike, and the imperative to place Asian and Arab American studies in conversation as part of a larger anti-imperial intellectual project. The novelty of Boycott! within her intellectual oeuvre thus lies not so much in its topical concerns as much as the political and historical scaffolding she erects around them. Maira takes pains to lay bare the core tenets of BDS, but the work is no mere rehashing of principles. The text is artfully staggered between historical indexing and contemporaneous analysis. In this manner, the writer compartmentalizes pivotal milestones such as the launch of the Palestinian Campaign for the Academic and Cultural Boycott of Israel (PACBI) in 2004, the issuing of the Palestinian call for BDS in 2005, and the inauguration of the U.S. Campaign for the Academic and Cultural Boycott of Israel (USACBI, of which Maira herself is a founding member) in 2009 before moving into more nuanced analysis.

For instance, Maira provides a useful overview of how BDS dovetails with the history of boycott as a tactic of resistance within U.S. contexts of struggle before she advances the reader's analytical comprehension of BDS's transnational sociohistorical significance. Chapter 1 demonstrates how boycott as a tactic of resistance is far from unprecedented within Palestinian histories, but in fact was used from the 1880s through the Mandate era and onward (pp. 41–48). This situation of the centrality of boycotts to the First Intifada helps demonstrate how BDS activism may be seen as a resumption of pre-Oslo Palestinian collective resistance within and without the Palestinian homeland. Also crucial is the author's clarification of how descriptions of Israel as an “apartheid state” as well as the use of apartheid as a wider, actionable rubric within which to frame and agitate against Israel's oppression of Palestinians did not suddenly arise alongside the BDS call, but can be traced to the linkages anti-apartheid activists began to make in the wake of the Sharpeville massacre (pp. 30–31).

Maira references how neoliberalization and liberal ideologies are uniquely primed to accommodate Zionism at various points, as establishment invocations of “rights” and the need for “dialogue” themselves become tools for silencing academic support for Palestinian freedom (pp. 97, 107, 116–17). Yet while she makes generous reference to Stephen Salaita—the premier scholar to address this intersection in works such as Israel's Dead Soul (Temple University Press, 2011)—it would have been fascinating to read a more sustained consideration of why this is the case. While space does not permit the tracing out of an extensive genealogy, such an investigation might consider the particulars of American liberalism as adumbrated by figures such as John Dewey, Eric Voegelin, Judith Shklar, and Edmund Fawcett, to name but a few. If not precisely ahistorical in character, such thinkers (often liberals themselves) at times depict liberalism as an atomized reaction to particular historical incidents, a reaction that in turn spurs a retreat to individualistic idealism. This could provide one solution to understanding how liberal thought can often unquestioningly defend Israel as necessitated by the Holocaust and ignore outright or retrospectively validate preceding histories of Zionist settlement and dispossession of Palestinians. Given the current prevalence of the question of academic freedom, a historical overview of the concept—not as an otherwise enshrined but presently embattled guarantee so much as a tenuous framework that has always been put even further into question, and fortified, at moments of antagonistic conjuncture between donor interests, faculty speech, and research—would have been particularly timely.§

These minor points aside, Boycott! should be required reading for all new to BDS work and seasoned organizers and scholars alike.

Omar Zahzah is a PhD candidate in comparative literature at the University of California, Los Angeles.