Linfield, The Lions’ Den: Zionism and the Left from Hannah Arendt to Noam Chomsky, 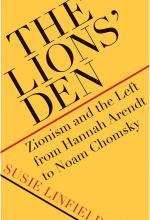 The Lions’ Den: Zionism and the Left from Hannah Arendt to Noam Chomsky bears a subtitle that is a grave misnomer. Of the “Left” intellectuals treated in this book, all but one—former New Left Review editorial board member Fred Halliday—are Jewish. Not that there is anything wrong with Susie Linfield’s focus on Jewish intellectuals in itself. At a time when critics of Israel are being wantonly targeted as anti-Semites, a book that offers a broad spectrum of Jewish responses to Zionism valuably reminds us of the long and venerable tradition of Jewish anti-Zionism.

It is no accident that this selection sells the Left short. It is one thing that the anti-Zionist Left is rarely invoked except as an anonymous block (“Many if not most leftists rejected the very existence of a state for the Jewish people” [p. 209]); it is another thing that this “Left,” despite being supposedly in thrall to third-world nationalisms, is almost entirely Euro-American. How is it possible to write a book that pretends to be an account of Zionism and the Left without including—except in perfunctorily negative asides—Edward Said, whose “Zionism from the Standpoint of Its Victims” remains a classic and remarkably generous Left engagement with that ideology and its consequences.* The absence of any analysis of Palestinian leftists, except as instances of terrorism or irredentism, strikingly subserves the overall picture of a backward, fanatical Arab world that Linfield promotes.

A dispassionate analysis of Zionism is the furthest thing from this book’s aims. Linfield makes no secret of her principles of evaluation (pp. 6–7). Only thinkers who defend “the right of the State of Israel to exist,” or who evolve to embrace that position, enjoy her imprimatur. Those who question the Zionist project, critique its nationalist ideology, or acknowledge the colonial ambitions that shaped Zionism from the start are castigated as confused, conflicted, immature and, in a somewhat sophisticated version of the tired trope, as self-hating Jews.

All of this is wrapped up in a crass pop psychology that attributes critical responses to Zionism to the upbringing or prejudices of the perpetrators. Maxime Rodinson, suffering the disappointment of the European Left with Stalinism, simply transfers his loyalty to third-world and Arab decolonizing movements. His principled anti-Zionism turns out to be “a kind of frozen fidelity” (p. 136) to the anti-Zionism of his working-class parents, implicitly a displacement of mourning for their death in Auschwitz. There is something quite distasteful in deploying this kind of psychologizing to dismiss Rodinson’s inconvenient analysis of Zionism as a colonial enterprise. Examples could be multiplied in the cases of Arendt (“obsessed with Jewish shame, Jewish honor, and Jewish dignity” [p. 25]); Arthur Koestler (with his “juvenile insistence on seeing complexity and weakness as synonymous” [p. 98]); or Isaac Deutscher (“a deeply conflicted Jew” [p. 164]). Only those who “mature” to what Linfield considers a complex and “realistic” position—Halliday, the mature internationalist (p. 209), is her model here—are exempt from this mind-numbingly conformist mode of judgment.

Perhaps the most revealing chapter is on Albert Memmi, whose profound contradictions are papered over largely because this great anticolonial theorist later became a committed if critical Zionist. For Linfield’s Memmi, the pivot lies in the strange notion that Zionism was “neither more nor less than the national liberation movement of the Jewish people” (p. 179). This would have surprised early Zionists, who openly understood Zionism to be a colonizing project at a time when colonization was an honorable trade among the European powers whose support they sought. Linfield has to perform the extraordinary maneuver of ignoring the first part of Memmi’s classic analysis of settler colonialism, The Colonizer and the Colonized (Beacon Press, 1957), in order to cast Zionism as a decolonizing ideology. But Memmi’s analysis of settler colonialism remains prescient regarding the unfolding of the Zionist project. There could hardly be a better characterization of the evolution of Zionism nor a better explanation of the dilemma of the left-wing Zionist than Memmi’s portraits in that work of the “colonizer who refuses” (the left-liberal Zionist) and the “colonizer who accepts” (the right-wing Zionist). Colonialism and nationalism are fundamentally contradictory processes. The indubitable pain that inhabiting those contradictions causes cannot be dismissed as confusion or immaturity any more than contradiction can be wished away by invoking “complexity” and “experience.”

Linfield remains fixated on a thing of the past, the two-state solution. This is the respectable fantasy of intellectuals whose leftism has been overtaken by the inexorable drift of Zionism rightward. It stands as a delusional litmus test: whoever denies the two-state solution is guilty of demonizing Israel and its legitimate aspirations to realize its national destiny. But Israel was never just another decolonizing nation. The most cogent left-wing analysis of Zionism has understood it as a typical, if belated, settler-colonial project. Rodinson’s “Israël, fait colonial?” (1967)† was not the first to theorize Zionism as colonialism, nor the last. He was anticipated by Fayez Sayegh’s “Zionist Colonialism in Palestine” (1965)‡ and followed by a number of Israeli sociologists, such as Baruch Kimmerling and Gershon Shafir, and eventually by contemporary theorists, such as Patrick Wolfe, all unmentioned by Linfield. Like most settler colonies, Israel maintains an apartheid system, exacerbated by its failure to complete the replacement of the native population. Israel’s apartheid is sui generis: the charge depends not on a flimsy analogy with South Africa (p. 310), a shopworn Zionist fallacy, but on the definition given by the Rome Statute of the International Criminal Court. The evolution of the settler colony toward an increasingly intransigent determination to displace the native population was foreseen by many of the critics of Zionism Linfield discusses and by many she omits.

The ultimate bête noire for Linfield is not Palestinian resistance, but the Boycott, Divestment, Sanctions (BDS) movement. The Lions’ Den is one long prolegomenon to a tendentious and mostly erroneous polemic in its conclusion (pp. 308–10) against a nonviolent, nonsectarian, antiracist movement that attracts the support of a global Left that is consistently critical of the terrorism inflicted both by states and by nonstate actors and that is grounded in precisely the principles of universal rights and self-determination that Linfield claims to value. “Realism” now means coming to terms with what it will mean to confront a racial state across historic Palestine. And only in the terms that the BDS movement has elaborated is a Left resolution of the Zionist question imaginable.

David Lloyd is distinguished professor of English at the University of California, Riverside. His most recent book is Under Representation: The Racial Regime of Aesthetics (New York: Fordham University Press, 2018).