Jaffa: From the Napoleonic Conquest to the Campaign of Ibrahim Pasha (1799–1831) 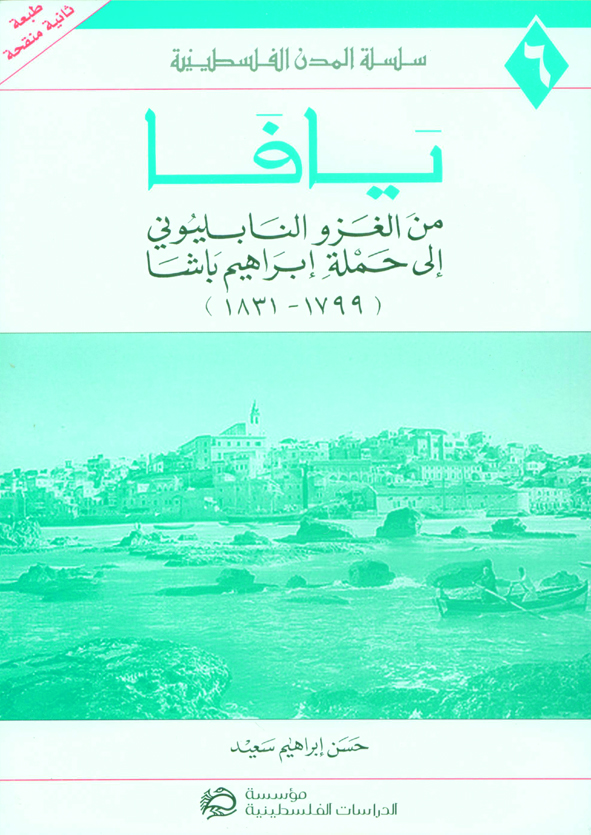 The book is the sixth in a series of monographs on the Palestinian cities published by the Institute for Palestine Studies. It deals with the events and developments that the city of Jaffa witnessed during the period extending between 1799 and 1831, and with the role of the city's rulers either in its prosperity or in hampering its growth and development, especially that its geographic location gave Jaffa an advantage rarely matched by many of the other coastal cities. The abundance of water and the fertility of its lands played a major role in agricultural prosperity. The seaport also played an important role in trade with Syria, Egypt, and Europe at the same time. It is probably this peculiarity that made Jaffa attractive to immigrants from Syria, Lebanon, and Egypt in the first place, in addition to some other Palestinian districts and localities. Together these features made Jaffa a city with a very special population mix.

The book relates the political, social, and economic history of Jaffa, and describes it at the turn of the 18th century. It then portrays its rulers, such as Muhammed Abu Maraq, Muhammed Abu Nabbut, and Abdallah Pasha, and studies the architectural development, as well as the commercial and economic evolution of the city. A special chapter is dedicated to the city's population, with an emphasis on immigrants and the way they were integrated into its social fabric, including how some Christians converted to Islam. The book deals also with the Jewish community and the status of women in the Palestinian coastal society, which makes it an important and indispensable reading for the study and understanding of modern Palestinian history.

Hasan Ibrahim Said was born in 1949. He holds a Ph.D. from Bar Ilan University, and he has published many studies and researches on the history of Palestine.