Diaries of the Fall 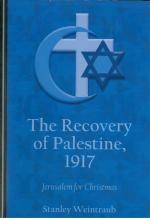 In The Recovery of Palestine, 1917: Jerusalem for Christmas, Stanley Weintraub once again narrates the daily life of a great war by opening the diaries of notable individuals, joining his earlier works on wars erupting at (or for!) Christmas, such as World War I (2001; 2014), the Battle of the Bulge in World War II (2007), Pearl Harbor (2012), and others. The author served as a second lieutenant in the eighth U.S. army in Korea in the early 1950s, and went on to a career as a historian and biographer specializing in T. E. Lawrence, Richard Cœur de Lion, and Bernard Shaw. The two heroes around whom The Recovery of Palestine pivots are General Edmund Allenby (Weintraub attempts to show both his plans and his intentions as unblemished) and T. E. Lawrence who was “doing a great job” helping to fullfil the “imperial designs” in spite of his “pro-Arab ventures.” Weintraub is thus less a critical historian than an acolyte of “great men.”

In the midst of World War I, with British morale falling due to the Russian Revolution, which brought down the allied Czarist regime, and after several failed attempts by General Archibald Murray to conquer southern Palestine, British prime minister David Lloyd George turned to a new commander, General Edmund Allenby, who was asked to take Jerusalem before Christmas. Allenby (or “al-Nabi,” the prophet, as some misled Arabs pronounced his name at the time) was a brilliant general raised on the Bible and armed with George Adam Smith’s Historical Geography of the Holy Land, handed to him by Lloyd George as “a better guide to a military leader whose task was to reach Jerusalem than any survey to be found in the pigeon-holes of the War Office.”

Weintraub includes many engaging details of the daily lives of the British soldiers who advanced without stopping from Gaza toward Jerusalem, with the goal of presenting the holy city to the British nation as a Christmas gift. In writing the details of this campaign, Weintraub reproduces the daily lives and the long nights of the British, Australian, and New Zealander troops, to illuminate the great obstacles facing this symbolic victory. Weintraub attempts to show that the on-the-ground realities of the war proved that the Ottomans were an easy prey due to the clever and unexpected military plans of Allenby and his chief of intelligence, Colonel Richard Meinertzhagen. The main obstacles were in fact natural ones: the “extreme climate” of the Sinai (the real “enemy”) was so intensely hot that metal weapons “had to be wetted before being lifted”; snakes and insects attacked the troops; wild storms and heavy rains slowed the troops’ progress; and so on. After surviving the Sinai campaign under Murray’s command, Allenby drew a number of lessons and chose to launch his campaign against Gaza and “penetrate Palestine” in late October so as to avoid the extreme summer sun.

It is no wonder that the book ends with the euphoria of the conquest, since Weintraub’s purpose is to narrate the details of this hard-won battle, emphasizing its symbolic importance for the British. Weintraub devotes only a few pages to events after 8 December 1917, the day when Izzet Bey, the Ottoman governor of Jerusalem, personally implemented his “last act as governor” by destroying the telegraph office in Jerusalem with a hammer. The next day, Husayn al-Husayni, the mayor of the defeated city, passed the holy city’s keys to Major General John Shea, asking him to protect Jerusalem as the Muslims had “protected it for more than five hundred years.” At last, the mission was accomplished and, as the New York Herald headline declared, “Jerusalem Is Rescued by British after 673 Years of Moslem Rule.”

On the way to conquer Jerusalem, the author implicitly differentiates between the real goals of the battle and those distributed for public consumption. On the one hand, the decision to wage war is based on economical and geopolitical considerations, and the Palestine campaign must be understood in the context of Britain’s growing “anxiety … about the security of Suez, its route to India.” On the other hand, any victory that paved the way to a British military parade in the heart of Jerusalem would make headlines in “British newspapers hungry for good news.” Weintraub is well aware of the magic of religious discourse in uplifting the morale of the British nation and tells the story of Jerusalem’s conquest as a hard-won victory motivated by the longing for biblical Jerusalem.

Indeed, what makes this victory unprecedented in the midst of World War I was the systematic employment of the biblical status of “stolen” Jerusalem. Thus, the author, deliberately, begins with a chapter titled “The Dream of Jerusalem,” where he digs deep in the diaries of prominent British politicians and re-reads the Bible, silencing some phrases and highlighting others, to place Jerusalem at the “center of the world.” Jerusalem becomes central not only to Jewish and Christian mythology, and to politician’s speeches, but also to the representations of the British masses, for whom Jerusalem was not a “destination” until 1917.

Weintraub tries hard to convert the Battle of Palestine into a novelistic tale full of plots, where the reader is pushed to sympathize with the biblically-motivated mission to conquer Jerusalem. In doing so, he joins the club of Orientalist historians who, in narrating the details of the battle for Palestine in 1917, place Jerusalem at the center of the world. The author continuously describes Jerusalem as the umbilical cord that combines the Zionist idea with Britain interests. As Allenby ordered British aircraft to bomb the historic Mount of Olives in order to force the Ottomans and Germans to withdraw faster regardless of the fate of Jewish holy places, Meinertzhagen expressed his anger and “became an ardent Zionist.” The mission to “free” Jerusalem became even more urgent as the Ottomans were seen to intensify the humiliation of the “Christians and Jews in the city.” Furthermore, in London, the Zionist leader Chaim Weizmann offered the British troops ten thousand tons of acetone “for no fee” in the first years of the war; in its last months, the British troops were receiving aid from the mysterious Zionist spy Aaron Aaronsohn and his wife Sarah. The author presents these events successively to show that mutual interest during the campaign tightened the ideological connections between the Britain and the Zionist ideas. This mutual assistance was translated into the Balfour Declaration on 2 November 1917. The creation of a Jewish homeland in Palestine became more attainable as the British troops took Nabi Samwel, on the outskirts of Jerusalem, on 21 November. The capture of the holy city became a matter of time.

The author refers repeatedly to the Seven Pillars of Wisdom, the autobiographical account of Lawrence, the British Orientalist and army officer. Lawrence was not a passive witness recording his diaries during the battle, but an active participant who was, more than any other Briton, familiar with the society and engaged in the politics of the Bedouin of southern Palestine. The author seems to accept the controversial claim raised by Lawrence that Lawrence’s efforts were met by his rape by Hajim Muhittin Bey, the Dara‘a district governor, and that the conquest of Jerusalem erased this dark moment when the Orientalist soldier attended the British army parade in Jerusalem, where his eyes met those of General Allenby as he descended from his Rolls Royce.

Through this “biblical” conquest, Jerusalem was re-centered again in the collective memory of the British – after being presented as a “gift for Christmas” to the dejected British masses in the war. Weintraub decided to publish his work one hundred years later, deploying his charming style, as if he was recounting another – modern – Crusade. As a book of history, The Recovery of Palestine, 1917: Jerusalem for Christmas narrates the battle of Palestine in a stereotypical and selective way.

Walid Habbas is a PhD student at the Hebrew University of Jerusalem. He focuses on the political economy of the West Bank, including modes of Palestinian–Israeli economic interaction disaggregated by class and sector. His fields of interest are Israeli colonial structure, native agency, and the economy of borderlands.