A Reading of the Modern Narrative of Amman City: Master Plan, Square and Landmark 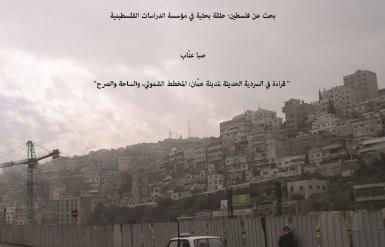 Research on Palestine is a seminar series hosted by the Institute for Palestine Studies in Beirut. It is geared towards up-and-coming researchers, but the series will discuss any new research in Palestinian Studies. It gives researchers the opportunity to reflect on the story behind their projects as well as their research findings. The formation of Amman as the capital of the “modern state” of Jordan was a gradual process beginning in the 1950s and lasting through the 1980s, a period punctuated with over fifty planning attempts within the capital and across the country as a whole. However, it was not until the 1980’s that signifiers of the modern state started to become evident in the cityscape: the master plan, the plaza, the monument. This symptom of belated modernity cannot be read outside the successive separations from Palestine that Amman was experiencing in the same period. Those “separations” varied in their intensity but were all inscribed in the cityscape, leading to inner schisms in the city structure. In the official discourse, a new phase for Amman as a modern city—in a postmodern time—was announced during the 1980s, introducing a new kind of monumentality that emphasized those schisms.