Daigle: The Limits of Detente: The United States, the Soviet Union, and the Arab-Israeli Conflict, 1969-1973 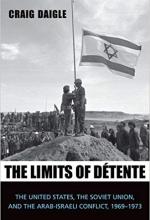 Craig Daigle
The Limits of Détente: The United States, the Soviet Union, and the Arab-Israeli Conflict, 1969-1973
2012
-
English
Purchase
Abstract:

In this book, Craig Daigle, assistant professor of history at City College of New York, addresses the origins of the 1973 war between Israel and its neighbors. His thesis will be surprising to many. Interestingly, while it is well-known that Anwar Sadat’s initiation of this war was part of an overall strategy of making peace with Israel from a position of strength rather than the defeat of 1967, this is a fact not highlighted by Daigle. Rather, writing as a specialist on U.S.-Middle East relations during the Cold War, Daigle argues that, however unwittingly, the United States and the Soviet Union, in their pursuit of détente, played significant roles in actually precipitating this conflict. It resulted, he contends, as much from Washington and Moscow policies related to détente as it did from competing interests of the Middle East parties.

Daigle further argues that these policies have been missed in most of the studies done on 1973 and the period. Many such studies conclude during the summer of 1970, and thus do not even address three important years immediately prior to the 1973 conflict. Others simply overlook the role détente played in contributing to the 1973 conflict. Daigle hopes to fill this gap “by presenting the first detailed survey of U.S.-Soviet relations in the Middle East in the era of détente” (p. 7).

Daigle’s experience in the fields of history, foreign relations, and the Middle East are impressive. Before coming to City College, Daigle was employed by the U.S. State Department’sOffice ofthe Historian (2001–07). He was also assistant editor of the Eleanor Roosevelt Papers: The Human Rights Years, Volumes I and II, and has been a member of the Executive Council of the Society for Historians of American Foreign Relations.

In impressive detail, Daigle demonstrates how détente, from its beginning days in 1969, while favored by both the United States and Soviet Union for reasons individual to each superpower, presented problems for the Middle East. The very process by which détente originated is a key step in his argument. President Nixon was softening his anti-communist rhetoric and desired increased cooperation between the two superpowers to reduce the “burden of arms” (p. 19). Meanwhile, the Soviet Union saw détente as a strategy for containing the increasing threat from China, easing its own financial military burden, and gaining access to Western technology for its industries. While détente included a desire to avoid a confrontation between the two superpowers in the Middle East, stability and peace in this region were not the key priorities of the superpowers. Rather, their chief objective was the easing of tensions between their two nations, and in pursuing this goal they put policies into place that actually undercut Middle Eastern stability. Meanwhile, neither the Arabs nor the Israelis desired to have a “big power” (p. 37) solution imposed on their region, and they made their wishes clear to the superpowers.

Daigle gives a detailed account of the negotiations between the two superpowers, as well as their ongoing discussions with their respective allies in the Middle East as they tried, and often failed, to reach agreements on regional policy. In the end, he argues, the two superpowers signed agreements in 1972 and 1973 that—however successful they appeared to the outside world—created an untenable situation. The United States and the Soviet Union sent an unmistakable message to the Arab world that the Soviets were willing to allow Israel to keep the land it had acquired in the 1967 war indefinitely.

While some may question Daigle’s thesis, it does answer one nagging question many have asked over the past forty years, namely, why Anwar Sadat would lead his country to war against militarily superior Israel. He did so, argues Daigle, not to try to defeat Israel, which he knew he could not do, but rather to create a “crisis of détente” (p. 294)—that is, to break the stalemate in the region, sometimes called “no war, no peace” (p. 288), created by the United States and the Soviet Union, which allowed Israel to keep possession of the Arab territories. War was the only solution Sadat saw to an unacceptable situation created by the two superpowers.

As surprising as this thesis sounds at first, it becomes increasingly reasonable as one reads through Daigle’s compilation of events and conversations. This is especially so when one realizes that Daigle has drawn on documents only recently made available to shed light on details of this conflict, though he does not tell the reader what these recently declassified documents are.

It is a good read and the plethora of stories, names, dates, discussions, and other details marshaled by Daigle make it a highly informative one as well. He is a clear writer, and the stories and actual events he records to illustrate his claims will also hold the reader’s interest. While this book is constructed around the central thesis outlined above, it would be a helpful text for a course on the history of U.S.-Soviet-Middle East relations during this period. The behind-the­scenes information provides readers with a “front row seat” as they become aware of the key events of this time period. It will also give sufficient information to enable readers to form their own conclusions on the events described.

Paul Chamberlain is an associate professor of ethics, theology, and philosophy of religion at Trinity Western University in Langley, British Columbia, Canada.