Khalidi: Brokers of Deceit: How the U.S. Has Undermined Peace in the Middle East 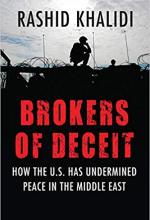 Rashid Khalidi
Brokers of Deceit: How the U.S. Has Undermined Peace in the Middle East
2013
-
English
Purchase
Abstract:

Reviewed work(s): Brokers of Deceit: How the U.S. Has Undermined Peace in the Middle East, by Rashid Khalidi.

Why is there still no Palestinian state, some sixty-six years after the United Nations proposed dividing Palestine into separate Arab and Jewish portions? There are plenty of obvious answers, including Israeli intransigence, Palestinian disunity, European indifference, and the callous cynicism of most Arab governments. Today, as Secretary of State John Kerry vainly attempts to restart the so-called peace process, Palestinian statehood seems farther away than ever.

In his new book Brokers of Deceit, Columbia University historian Rashid Khalidi highlights the other key reason why Palestinian national aspirations have been thwarted: the consistently pernicious role of the United States. While feigning to be an honest broker, the United States has either actively opposed creation of a Palestinian state or pursued that goal in a biased and incompetent way. Thus, failure to achieve an independent Palestine should not surprise us in the least: most of Israel’s leaders have been dead set against it and U.S. leaders have backed them at nearly every turn.

Khalidi makes his case by focusing on three revealing episodes, spanning some thirty years of Middle East diplomacy. The first episode is the 1982 Reagan Plan, a stillborn U.S. initiative that emerged following Israel’s ill-fated invasion of Lebanon. Reagan’s proposal opposed permanent Israeli control over the West Bank and called for a halt to Israeli settlement building, yet his plan also ruled out independent statehood for the Palestinians. Khalidi quotes extensively from a declassified CIA intelligence estimate that correctly forecasts Israel’s swift and firm rejection, a reaction that effectively scuttled the entire initiative. Yet, Israel paid no price for ignoring its patron’s wishes and U.S.-Israeli relations expanded significantly over the rest of Reagan’sterm.

The second episode is the Madrid peace conference in October 1991. In a strong position following the 1991 Gulf War, President George H. W. Bush and Secretary of State James Baker pressured the Shamir government into attending the conference and also managed to persuade it to allow several Palestinians to attend as part of a joint delegation with Jordan. Yet, Israel insisted that Israeli-Palestinian discussions be limited to talks on “interim self-government arrangements”— not statehood or the full range of outstanding issues—a constraint that reflected Israel’slong­standing rejection of Palestinian aspirations and its desire to retain the West Bank in perpetuity.

And as Khalidi makes clear, Madrid was an opening that led nowhere. Then, as now, Israel’score objective was to drag out negotiations for as long as possible, so that the settlement enterprise could continue to “create facts.” The number of settlers more than doubled between 1993 and 2001, while a vast network of checkpoints, barriers, and bypass roads carved up the West Bank. Israeli governments of all stripes pursued this policy with scant protest from Washington, and it has continued unabated ever since.

The third episode, and the most painful to read, is Barack Obama’s humiliating defeat at the hands of Israeli Prime Minister Benjamin Netanyahu and the Israel lobby in the United States. Having declared in his Cairo speech in June 2009 that “two states for two peoples” was in “Israel’s interest, Palestine’s interest, America’s interest, and the world’sinterest,” and having demanded that Israel halt further settlement expansion while negotiations proceeded, Obama found himself facing a defiant Netanyahu and pressure from the lobby back home. The president soon backed down, abandoning insistence on a settlement freeze, dispatching generous new aid packages to Israel, and continuing to shield Israel from criticism in the United Nations and from the broader international community. Like most of his predecessors, in short, the leader of the world’smostpowerful country found himself unable to advance the cause of peace and justice in any meaningful way.

Khalidi’s account shows that these episodes (and many others) are not the result of strategic myopia, a misreading of political currents in the region, or a deep-seated animus toward the Palestinian people. On the contrary, the depressing continuity of U.S. policy is primarily due to the pervasive influence of the American Israel Public Affairs Committee and the other key organizations in the Israel lobby.

The lobby’s influence has placed strict limits on the leverage that U.S. presidents can wield, therebycripplingWashington’s ability to act as an effective mediator. By the early 1990s, in fact, stewardship of the peace process was firmly in the hands of officials drawn from the lobby’s ranks—such as Dennis Ross and Martin Indyk—thereby ensuring that there would be no daylight between Israel’s positions and those of the United States. Indeed, Khalidi describes how U.S. officials routinely cleared proposals with Israel before presenting them to Palestinian negotiators—a procedure dating back to the Ford administration—and occasionally took positions that were more extreme than those of their Israeli counterparts. By acting as “Israel’slawyer” rather than an honest broker, the United States guaranteed that the Oslo peace process would end in ignominious failure.

Khalidi concludes by calling for the Palestinians to abandon the discredited Camp David/ Madrid/Oslo framework and base their campaign for self-determination on a new foundation: UN Security Council Resolution 242 and UN General Assembly Resolutions 181 and 194. There can be little doubt that Oslo’s “sell-by” date is long past, but the same is probably true of the two-state solution as well. More suffering lies ahead, for two peoples who have had more than their share, and it might well have been avoided had Washington pursued a smarter and more fair-minded approach. Brokers of Deceit is a powerful and revealing indictment of America’signoble role in this continuing tragedy, and history will judge U.S. leaders harshly for their strategically misguided and morally dubious policies.

Stephen Walt, a professor of international affairs at Harvard’s Kennedy School of Government, is co-author of The Israel Lobby and U.S. Foreign Policy.