Shohat: Israeli Cinema: East/West and the Politics of Repression 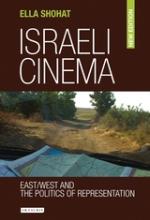 I first read Ella Shohat’s book when it was published in Hebrew in 1991. Rereading it confirms it as an astute analysis of the cinematic representation of Zionist history and ideology. Shohat is a Mizrahi-Israeli NYU professor of cultural studies whose work has been translated into many languages. The initial book, covering the development of Israeli cinema until 1986, has now been republished with a postscript that locates it within Western academic debates around multiculturalism and postcolonialism, to which Shohat is a key contributor. Shohat surveys Israeli cinema from an East-West and Third World-First World perspective, as representing an ethnocentric colonial

imaginary by Zionism, both the product of a liberation struggle of European Jews—not unlike anticolonial Third World struggles—and “a constituted state allied with the West against the East . . . premised on the denial of the Orient and of the legitimacy of another liberation struggle, that of the Palestinians” (p. 1).

Indebted to anticolonial discourse, the analysis follows Said’s Orientalism, which positions Westerners in complex relationships with the Orient. In Israel, this project not only racializes Zionism’s Palestinian others but also its Jewish others—Arab Jews. The book posits a close relationship between filmmaking and official ideology; in Israel this led to blocking both the Palestinians’ and Arab Jews’ right to self-representation.

Rather than merely textual, Shohat’s deconstructive analysis bridges text and context. As it would be impossible to do justice to her detailed reading of the development of Israeli cinema, I only touch on selected themes which the initial volume divides into five main phases, paralleling the ideological construction of Zionism. In the first phase, during the pre-state Yishuv period, films reflected Zionism’s civilizing mission, with European Zionist pioneers making what was considered the Palestinian “desert” bloom. In the second phase, the 1948 war gave rise to a heroic-nationalist cinema that lasted until post-1967, focusing on mythical Euro-Israeli heroes and erasing any Palestinian presence. Only in the third phase did Arab Jews—Mizrahim—appear, in the form of the (comic) “Bourekas” genre, another colonialist take on European Jewish superiority, representing Mizrahim’s countries of origin as another empty, uncivilized space. The fourth phase is marked by what Shohat calls “personal” cinema, providing ironic, narcissistic allegories on the loss of Zionist innocence. Only in the fifth phase does Israeli cinema acknowledge the Palestinian presence. However, although reflecting “progressive” aspects of the conflict, these films “operate within the general framework and assumptions of Zionism,” reflecting Sabra bewilderment at the realization of the existence of the Palestinian other (p. 218); the argument throughout is that official Zionist ideology and Israeli filmmaking are indelibly linked.

Reflecting on the initial themes, the postscript surveys post-1986 Israeli cinema, focusing on Palestinian films and on representations of Arab Jews in Israeli culture. Shohat explains her choice to title the book “Israeli” cinema only in the postscript, echoing contemporary debates over the conceptualization of Israel as the “state of all its citizens,” defining Israeli cinema as made by all Israeli citizens and reflecting the liminal zone between Israel and Palestine. Despite Said’s contention about intertwining Palestine and Zionism, I am not fully persuaded of the equality implied here between films made by Jewish and Palestinian citizens of Israel, even though some of the films surveyed do convey ongoing Palestinian memory and liminality, exploring “the complex identities wrought by exile” (p. 277).

Shohat theorizes Arab Jews through the erasure of the hyphen—the Mizrahi “forms an in-between figure, at once inside and outside, ‘in’ in terms of privileged citizenship within the Jewish state, in contrast with Palestinian citizens of Israel, but hardly ‘of’ the hegemonic national culture” (p. 266)—a poignant observation upheld by the films analyzed.

In sum, Shohat effectively realizes her goal of unpacking, within a whiteness studies critique, the unspoken normativity of Sabra-ness and Euro-Israeliness (Ashkenaziness). The postscript is in line with the rise in postcolonial scholarship within Israel. But Shohat also reminds us that “passing off ‘hybridity’ as always already ‘resistant’ appears to sanctify the fait accompli of colonial violence” (p. 268), upheld by the Israeli reality of segregation and the separation wall, all continuing to define national and ethnic belonging by East/West reductionism and essentialist civilizational clashes.

Ronit Lentin, an associate professor of sociology at Trinity College in Dublin, Ireland, is the author of Thinking Palestine (2008) and Co-Memory and Melancholia: Israelis Memorialising the Palestinian Nakba (2010).