Tilley: Beyond Occupation: Apartheid, Colonialism and International Law in the Occupied Palestinian Territories 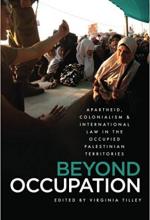 In 2009, a group of international scholars released a 300-page report entitled “Occupation, Colonialism, Apartheid?” which focuses on the legal characteristics of Israel’s rule over the West Bank, East Jerusalem, and Gaza. Funded by the Human Sciences Research Council of South Africa and presented to the South African Department of Foreign Affairs, the report examined not only the conventional topic of the law of occupation and its application to the Palestinian territories, but it also explored, more controversially, whether the legal concepts of colonialism and apartheid could aptly apply to the Israeli domination of these conquered lands.

Professor Virginia Tilley, who played a major role in organizing the original report, has edited and compiled the report’s information into a book titled Beyond Occupation: Apartheid, Colonialism and International Law in the Occupied Palestinian Territories. The book, like the report before it, is an open window of analytical fresh air on a difficult subject. But this is no mere exercise in academic theorizing. Determining the appropriate ways to characterize the nature of Israel’s rule over the occupied territories provides us with sharper tools to understand the underlying dynamics of the conflict.

The act of Israeli control over the West Bank, East Jerusalem, and Gaza since 1967 has been accepted by the international community, to be governed by international humanitarian law and the Geneva Conventions of 1949. Repeated resolutions by the United Nations Security Council, as well as the 2004 Advisory Opinion on the Wall by the International Court of Justice, reflect the international legal and diplomatic consensus that: (1) these territories are occupied, (2) the Palestinians in the territories have the status of a protected people, and (3) the belligerent occupier has no legal standing to claim sovereignty over any of the conquered lands. Only Israel asserts the moth-eaten legal position that these lands have a disputed legal status, and that it is legally entitled to build civilian settlements and freely extract water and other natural resources from the land it illegally occupies. Beyond Occupation offers a constructive and thorough study of the law of occupation in the context of the conflict, and provides an excellent starting point for anyone wishing to understand the issue within this conventional context.

Beyond Occupation breaks new ground with its employment of the legal concepts of colonialism and apartheid to the occupied Palestinian territories (oPt). The book argues that the law of occupation, while readily applicable to the conflict, has become increasingly inadequate as a legal tool to comprehensively explain the entrenched reality of Israeli rule.

The foundational instrument on colonialism in international law is the Declaration on the Granting of Independence to Colonial Peoples and Territories, which was adopted by the UN General Assembly in 1960. Applying the principal legal features of colonialism articulated in the Declaration—the arbitrary assertion of political authority over the indigenous population, forced economic integration with the ruling country, the expropriation of natural resources, separate legal regimes based on ethnic privilege, and the denial of self-determination—the authors maintain that these characteristics are amply met by Israel’s “systematic and comprehensive” practices of exploitation in the oPt.

The most contentious chapter in Beyond Occupation is its exploration as to whether Israel’s forty-five year rule in the oPt satisfies the legal definition of apartheid. Its analytical starting point is the 1973 International Convention on the Suppression and Punishment of the Crime of Apartheid, and its cornerstone statement is that apartheid is defined as the domination by “one racial group over any other racial group or groups.” In an exhaustive examination that exceeds 115 pages, the authors conclude that Israel’s policies and practices in the oPt “reflect the larger purpose of maintaining domination by Israeli Jews over Palestinian non-Jews in the same territory, and so fit the Convention’s definition of apartheid.” While acknowledging the ranges of differences that distinguish pre-1994 South Africa from the oPt, the book asserts that the two systems share some disturbing dominant features.

The arguments in this book are rigorous, sober, exhaustively researched, and well-presented. It is accessible to the general reader, the area specialist, and the serious activist, and is a compelling study for lawyers and legal academics. As the evolving facts on the ground in Israel/Palestine push our legal reference points from occupation to categories that are more profound and tragic, Beyond Occupation will become a standard intellectual reference for those concerned with the legal dimensions of the Israel/Palestine conflict.