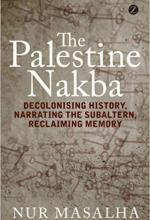 Nur Masalha has spent many years as one of the foremost analysts/historians of modern Palestine. His hallmark methodology is the amalgamation of historical rigor with material analysis and commitment to the human and international rights of the Palestinian people. Masalha is not what those ensconced in university offices like to call an “objective” scholar, but one with a distinct point of view he does not endeavor to hide. That point of view is carefully backed by considerable evidence and sharp, intelligent analysis. Masalha’s engagement with his subject matter is one of the most exciting features of his work.

The Palestine Nakba follows in this tradition, exhibiting Masalha’s typical clear-sightedness and superior organization of facts. The book is both synthesis and historiography, underlain by a sharp analysis of Israeli misdeeds and Palestinian discourses of nationhood. He does not mince words: “Much of the Palestinian material culture, landscape, toponymy and geography, which had survived the Latin Crusades, were obliterated by the Israeli state” (p. 2). The suggestion, supported by many pages of argument, is clear: Israel has been a more destructive force in Palestine than even the notorious Crusades.

The major contribution of The Palestine Nakba is Masalha’s use of extant scholarship to produce an original and complex theory of Palestinian decolonization. Masalha organizes his condemnation of Israel around a heterogeneous methodology, combining “reference to a wide range of historical sources with the study of knowledge and power; historiography and popular memory accounts; oral, subaltern and resistance narratives; indigenous, counter-hegemonic, post-colonial and decolonizing methodologies” (p. 9). While this range of approaches might appear exceedingly ambitious, Masalha organizes them into a coherent critique of Palestinian decolonization.

This critique encompasses the totality of Palestinian dispossession, but focuses on the 1948 Nakba as the crucial moment of modern Palestinian history. Within this excellent critique is an especially valuable analysis of naming and renaming as modes of colonial control. Masalha examines the “Hebrewization” of Arabic place-names and the expropriation of indigenous spaces into the identity of modern Israeli society, lending it an air of antiquity and historical possession through the very process by which it separates Israeli society from its “primitive” neighbors by deploying the major tropes of modernity. In the case of Israel, Masalha argues, the move toward modernity necessitates the appropriation of a reinvented antiquity. Thus we can see settlements based on the functionality of American planned communities but designed in such a way as to recall the romantic agrarian structure of village life.

This move to appropriate Palestine while cleansing it from modern consciousness is evident in places of worship. Masalha observes that an “important tool of the Israeli colonization project has been the consecration of Muslim shrines—shrines which had never been part of the Jewish tradition—as Jewish shrines” (p. 113). These moves aren’t always straightforward, Masalha illustrates. The medieval city of Asqalan, named al-Majdal by its Arab residents, was depopulated and named Migdal-Ad by the new Israeli settlers, who eventually circumvented the long non-Jewish history of the town by christening it Ashkelon. “Since then,” Masalha notes, “it has been kept as a purely Jewish city” (p. 116). Yet its Palestinian history, as throughout the Holy Land in general, is impossible to fully suppress.

Another interesting element of the book is Masalha’s analysis of memory and oral history. Despite the best-laid plans (fantasies, really) of the Israeli architects of 1948, the memories of villages and communities survive with no indication of abating anytime soon. Masalha explains, “The depopulated and destroyed villages and towns were often kept alive by passing place names down through generations of Palestinian family members. Inside Israel, those internally displaced refugees regrouped in different localities to create new definitions of kinship structures” (p. 207). The long history of Palestinian decolonization, then, has been built into the basic structures of everyday culture: something as innocuous as passing along a traditional place-name that has been erased or Hebrewized by Israel provides the groundwork for a resistance rooted in lived experience. Palestinians resist merely by communicating.

This seemingly simplistic but profound observation accounts for the general tenor of Masalha’s book. He moves beyond the truism that 1948 will always remain a part of Palestinian consciousness, exploring instead the meanings of 1948 as both symbol and event, assessing the many ways that the attempted erasure of Palestinian nationalism and peoplehood has failed. Masalha’s methodology might best be described as interdisciplinary, as he draws from numerous theoretical and empirical traditions. The writing is clear and the analysis sharp. The Palestine Nakba is appropriate for those who want to learn more about modern Palestinian history, as well as those who possess advanced knowledge of the Middle East.