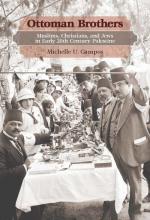 In this fascinating study Michelle Campos argues that the 1908 Ottoman constitutional revolution marked the emergence of imperial citizenship, a “civic Ottomanism” that was both an imperial project of nationhood and a mass social movement. Although her purview is empire-wide, she focuses on Ottoman Palestine and on how “Muslims, Christians and Jews became imperial citizens together” in the few years leading up to the Great War. She examines an impressive range of sites, including the press, pamphlets, memoirs, theater, ballots, boycotts, municipal politics, and Masonic lodges, and effortlessly navigates material in Arabic, Hebrew, Ladino, and Ottoman Turkish.

Campos positions herself against the “engrained” views that Ottomanism was a misguided top-down attempt to convert an empire into a nation. Indeed, she “theorizes imperial citizenship and nationhood in a new way” and insists that it was, if only for a brief moment, embraced, even constituted, by a large number of Ottomans across religion and ethnicity. As such, Campos also “challenges entrenched historical narratives about the role of ethnic nationalism in the breakup of the Ottoman empire.” In Palestine this meant that the conflict was neither inevitable nor predetermined.

The book presents its arguments over the course of seven chapters. In the first two chapters the author analyzes the celebrations, rituals, pamphlets, and debates surrounding the ideals of liberty, brotherhood, and equality, and explores how the empire’s various groups interpreted and appropriated them in ways that drew on a rhetoric of universalism and civic identity. In chapter three the author convincingly documents the ways in which subjects constituted themselves as citizens across religious boundaries by participating in civil and political [CUP] organizations, electoral campaigns, and boycotts. Chapter four provides copious and compelling evidence for the existence of a dynamic multi-linguistic press that played a significant role in the constitution of the citizen. In chapter five she looks at chambers of commerce and Masonic lodges, and suggests the emergence of a new kind of interethnic (and urban) sociability. Particularly fascinating here is a 1908 exchange between Yitzhak Levi, a Jerusalem candidate for parliament, and Subhi Bey, the new governor of Jerusalem. In chapter six, Campos takes a more focused look at Ottoman Jewry, arguing that their earliest embrace of Zionism (“Ottoman Zionism”) was “cultural Hebraism” akin to other Arab cultural renaissance movements of the time, and did not contradict their embrace of Ottomanism. The final chapter explores the Arabic language press debates and suggests that the inclusiveness of its discourse indicates that the “unmixing” of Palestine’s people was not inevitable. At the same time, Campos unfailingly reminds us that the content and scope, as well as the practical implications, of imperial citizenship were limited and contested. In addition to paying serious attention to countervailing currents, she demonstrates that the very instruments and practices of citizenship were at once sites for the emergence of challenges and contradictions to that very vision. Hence, electoral politics and the press (among other practices) were both instrumental in articulating the Ottomanist project while simultaneously undermining it by providing spaces for the expression of communal loyalties and intercommunal rivalries.

The evidence that Campos presents for the debates and practices surrounding Ottoman identity is rich and extensive. Yet, as compelling (and downright gripping at times) as it may be, what it collectively suggests is not the crystallization of an original imperial citizenship (on par with nationalism or even sectarianism), but of a bag of immense contradictions that made it ultimately not only incomplete but incoherent and anachronistic. This is complicated by the fact that the moment was simply not long enough to allow for further synthesis. At the same time, the author’s broad assertion regarding the emergence of an Ottoman civic identity is undermined by the choice of Palestine as its focus, in spite of the obvious attraction of the choice. While the ideals of the revolution were, by the author’s own analysis, challenged both by their own contradictions and countervailing consequences, the Zionist challenge to this vision did not come from within. In this regard the very material explored by the author suggests that Zionism was never in serious dialogue with Ottomanism and as such was quite different from other communal or ethnic cultural identities under the umbrella of Ottomanism.

It is impossible to do justice to the complexity of the author’s arguments or to the astonishing material that she has meticulously mined and superbly analyzed. Campos’ study complicates and enriches our understanding of the late Ottoman Empire, including Palestine and as such represents an original and exceedingly readable contribution to the field.