In the opening passage of Mohammedan Saints and Sanctuaries, a remarkable study of maqamat (“saint shrines”) in Palestine, Taufiq Canaan makes a curious observation. He laments the “destruction which has been the fate of forests in Palestine,” probably a reference to large-scale deforestation during the Ottoman period, and posits that trees that survived did so because of their sacredness. Sacred, Canaan writes, because of the association that many trees have with prophets, saints, and shaykhs – a kind of pantheon of holy men (and sometimes women) that was a dominant feature of Islam in premodern Palestine. Published in 1927, Mohammedan Saints and Sanctuaries is a work that aims to find structures, typologies, and logics among the hundreds of shrines that once dotted the flourishing Palestinian village landscape. Although there may have been as many as eight hundred such shrines in Palestine at the time, Canaan reviews 348 of them in his study, 235 of which he professes to have visited personally.

In early 2019, I was given a small grant from the A. M. Qattan Foundation for a photography project based on Mohammedan Saints and Sanctuaries. Spending the grant money on a cheap used car, I visited twenty-five of the shrines described in most detail by Canaan. My aim was to see what has happened to these shrines in the ninety-two years since the publication of this classic work of ethnology and folklore. Following the trail of Canaan’s visits, I rarely strayed far from villages around Jerusalem, where a disproportionately large number of the shrines he reviews are situated. There I found a variety of forms that these once sacred places have taken – shrines now decomposing in cemeteries, shrines housed inside modern mosques, shrines cared for by Bedouin shepherds, shrines turned into children’s parks, shrines adopted by messianic Jews, shrines used as garbage dumps, and so on. Clearly, there is no simple, succinct way to summarize their afterlives as places formerly sacred for Muslims.

Very often I came across trees described by Canaan as belonging to saints. Canaan calculated that 60 percent of the shrines in his study were associated with holy trees. He surmised that the sanctity of the shrines frequently drew from the already existing reverence for these trees. That is to say, the trees preceded the saints and their shrines as relics of what Canaan called the “former forest glory of Palestine.”

I could not have chosen a better word than “glory” to describe the ancient oak tree of the female saint al-Badriyya in the Sharafat neighborhood of Jerusalem (Figure 1). Al-Badriyya was known to have a number of trees to her name – two olive trees, a lemon tree, and several oak trees dispersed throughout the Jerusalem area, including in al-Malha, where an Israeli shopping mall now stands, and as far away as al-Ram in the West Bank. Some are still known by locals. Of these, the most spectacular is the ancient oak tree near her shrine, still standing, which is believed to be over a thousand years old. Its branches spread like outstretched arms as it hovers over the edge of a hill, overlooking Jerusalem’s southwestern sprawl, and a modern house extension steadily closes in on one of its sides, compromising the symmetry of its grandeur. Canaan tells a story in which a Jerusalem notable asked villagers from Sharafat to cut off a dying branch from al-Badriyya’s oak tree. The villagers tried to discourage any such thing, and the man had difficulty finding someone willing to perform this dubious task. The notable finally hired a Christian to saw down the branch, and the next day fell ill with rheumatism.

Al-Badriyya’s father, Sultan Badr, was himself a Sufi saint. He came to Palestine from the region of Khorasan, in present-day Iran and Afghanistan (or, in some versions, from Arabia). He is believed to have been a qutb, the Sufi concept of a perfect man, and spent a great part of his days roaming the wilderness around Jerusalem and meditating in caves. I found this wild pomegranate tree (Figure 2) at his shrine complex, still mostly intact, in Dayr al-Shaykh, whose villagers were expelled in 1948. It struck me as a very graceful tree; a young tree keeping a much older deceased pomegranate tree company. Sultan Badr, as Canaan tells us, was known to bring dead pomegranate trees to bear fruit.

Like Sultan Badr, the eighth-century Sufi saint Ibrahim al-Adhami came to Jerusalem from Khorasan and, like the Buddha, he was born a prince who renounced his royalty for an austere, spiritual life. He was known in particular for sleeping next to the foundation stone inside the Dome of the Rock. He wandered extensively throughout the Levant, and places were named after him wherever he went. In Bayt Hanina village, an ancient oak tree is said to belong to him. The village’s former muezzin (retired because the call to prayer is now zapped to the mosque’s loudspeaker directly from Ramallah, nullifying his services) told me that as a boy he used to sleep under the tree on hot days. In this photo, Ibrahim al-Adhami’s oak tree is to the upper right, and the modern Jerusalem neighborhood of Bayt Hanina is visible in the background (Figure 3). Once a ten-minute walk apart, the two Bayt Haninas are now divided by the separation barrier and perhaps two hours of travel.

Canaan does not mention the ancient olive tree in his discussion of the shrine of Abu Nujaym, who gives a Bethlehem-area village its name (Figure 4). I learned from a local politician, however, that there is “something strange” about the tree. When it gives fruit, he told me, the olives get eaten up as they fall to the earth. Is it Abu Nujaym who eats up these olives? In any case, the tree looked like it had not given fruit in centuries.

Shaykh Abu Yamin of Bayt ‘Anan was known to fly over his shrine at night with his band of musicians. His trees were a palm, a fig tree, and a pomegranate tree. Of these, the palm and the fig tree still stand (Figure 5). In Palestine, the archetypal “tree of life” is the palm. Canaan was very interested in this in his other writings, noting that the palm tree was often illustrated on saint shrines (needless to say, such pigments have not survived). He recounts an Islamic myth in which God created the palm tree from clay leftover from the creation of Adam – the first man. This, I induce, would make the palm the first tree. 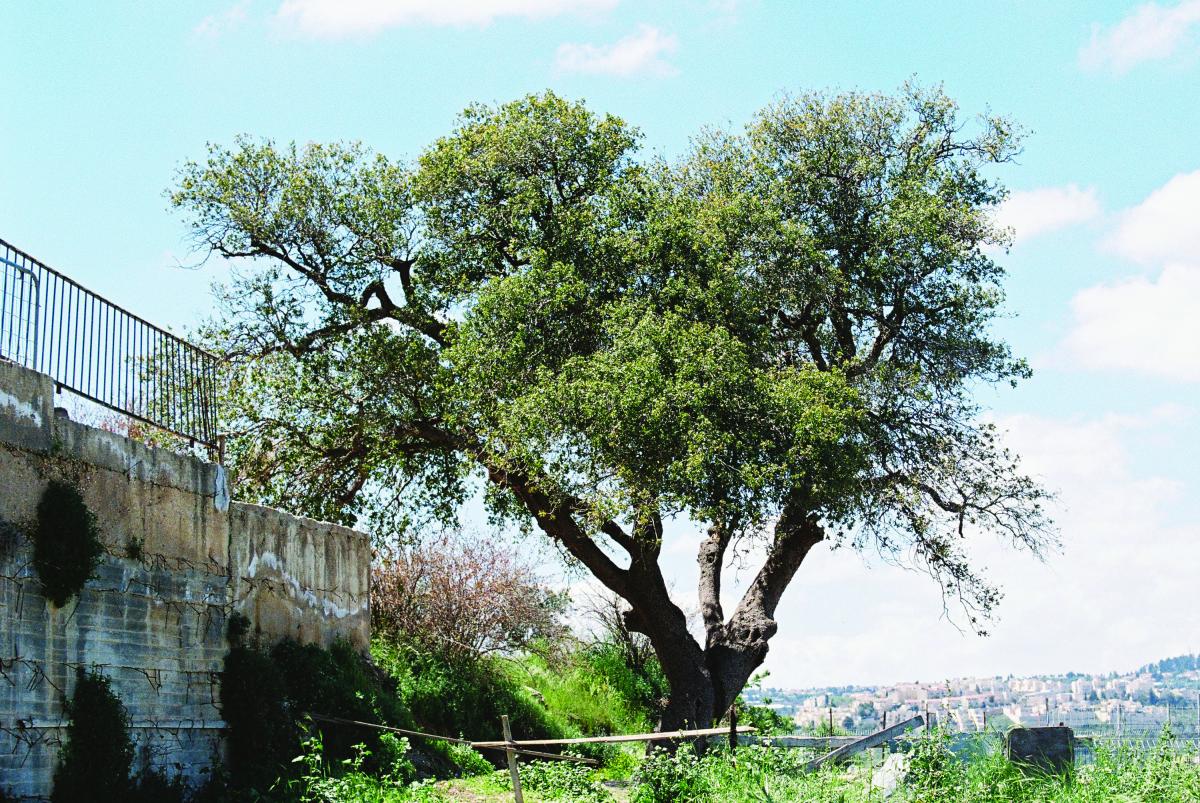 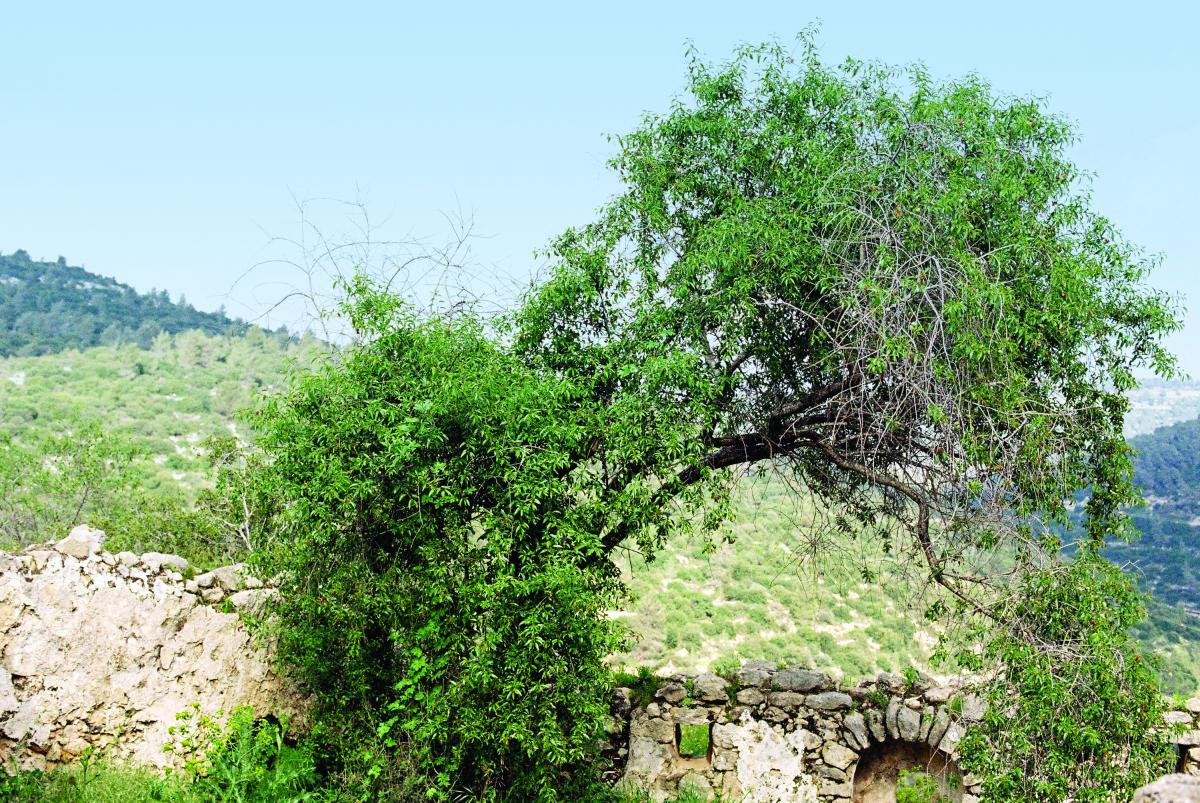 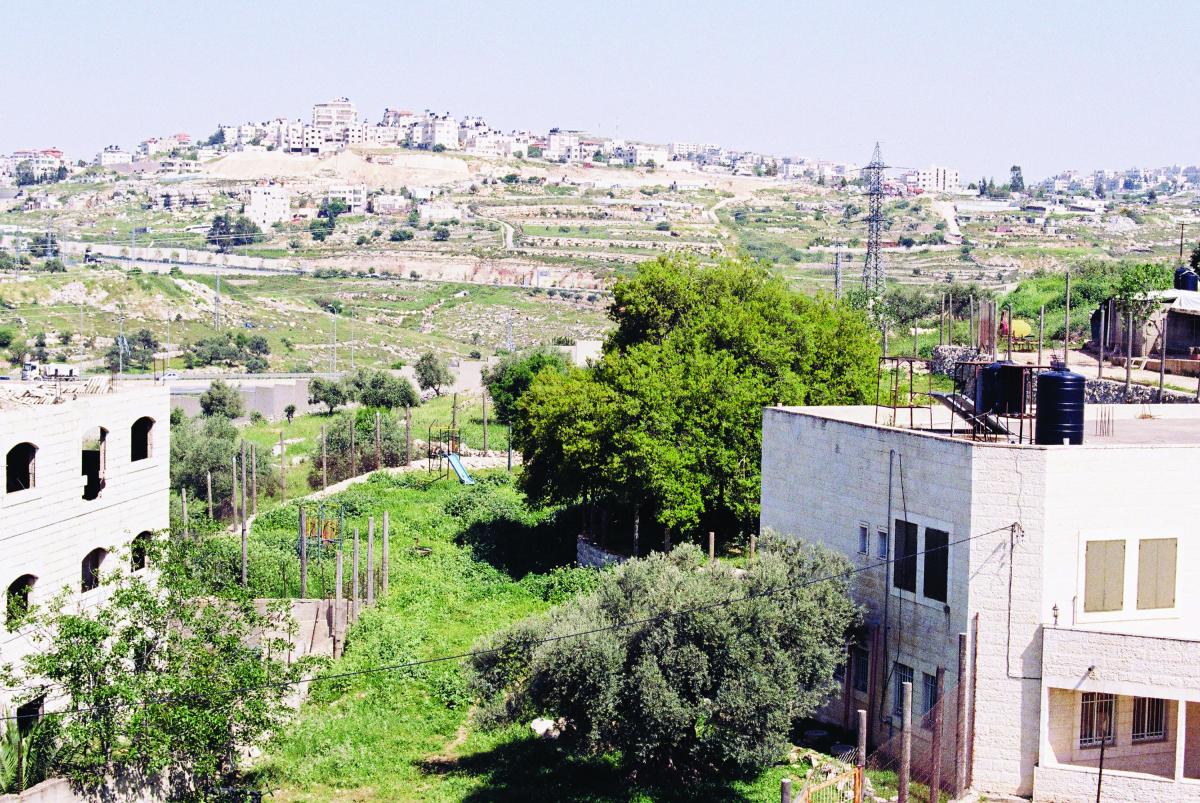 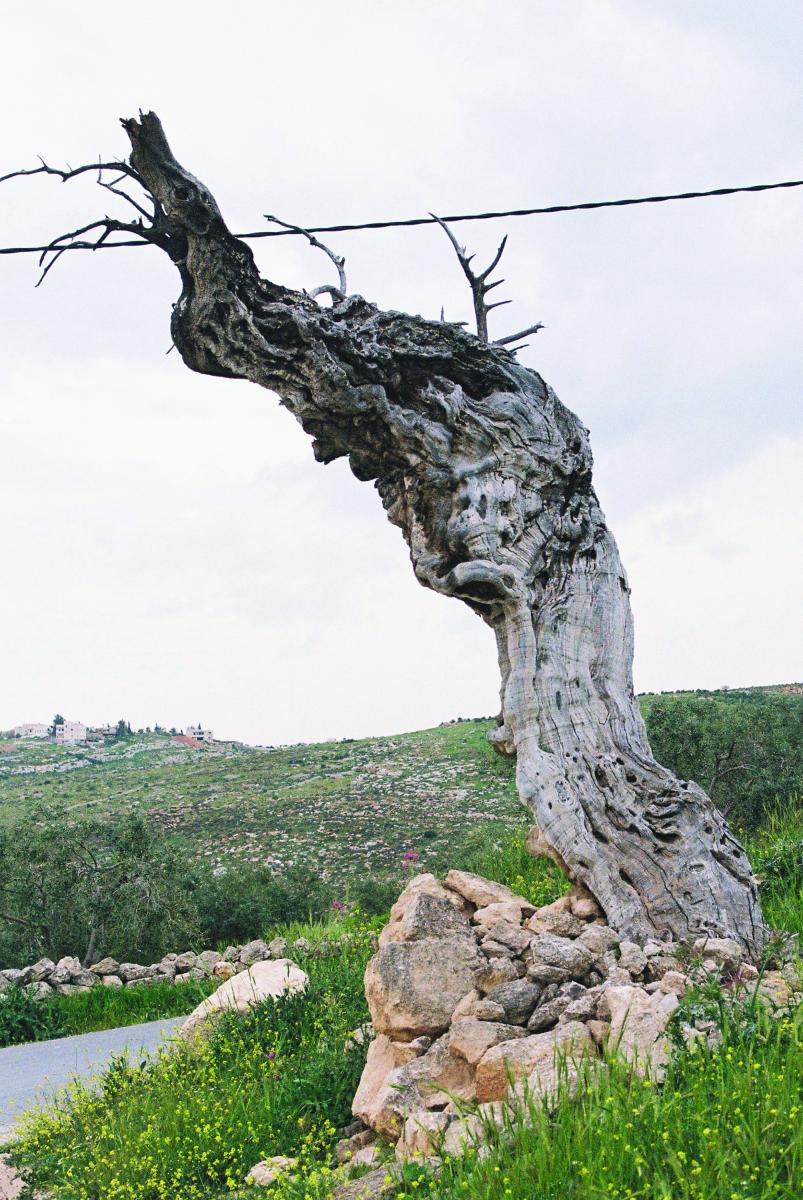 Figure 4. Olive tree at the shrine of Abu Nujaym, Bethlehem. 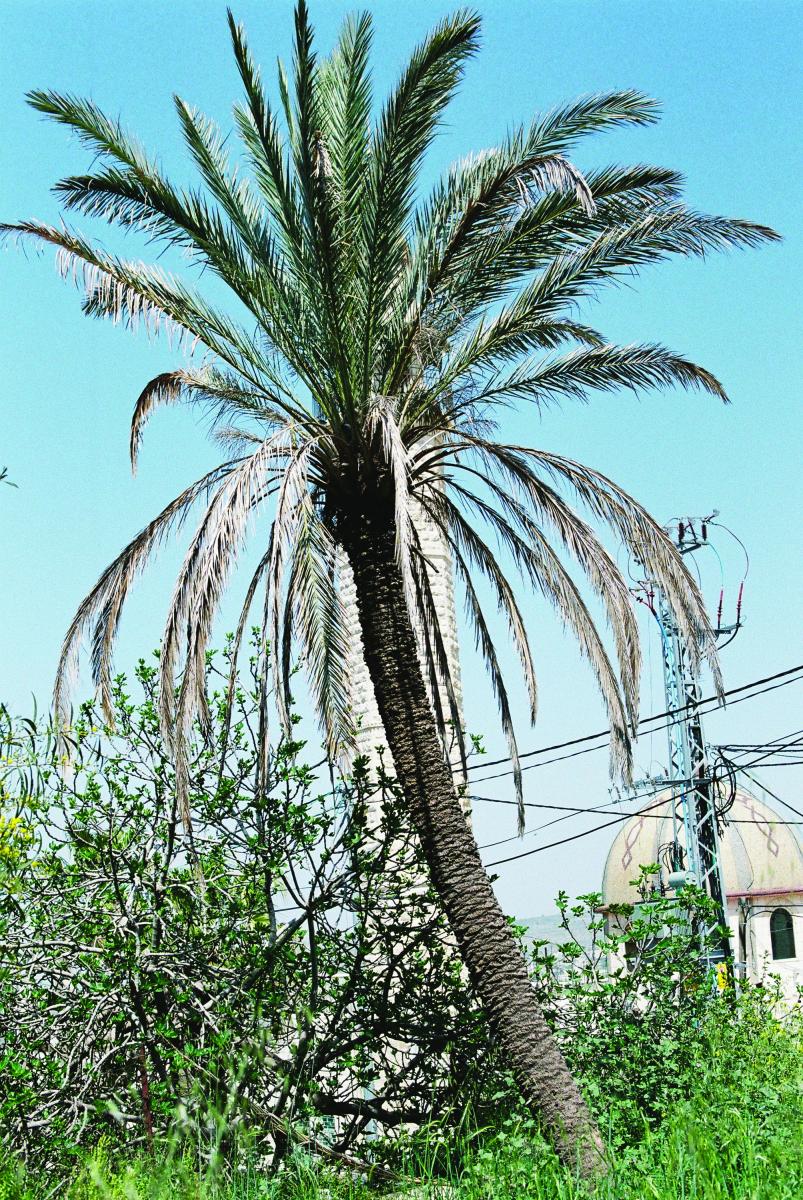 Figure 5. At the shrine of Shaykh Abu Yamin, Bayt ‘Anan.