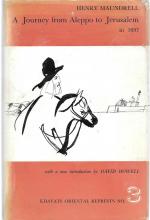 As the Holy Land of Christianity, Palestine has been a site for pilgrimage since at least the third century. Throughout the Middle Ages Christian pilgrims from all over Europe visited and venerated this land and even sometimes fought to gain control over it, as in the case of the Crusades. Over the centuries, scores of books were written by pilgrims about the their journey to Jerusalem. The main focus of such books was the description of the marvels of Jerusalem, Bethlehem, Nazareth and other Biblical towns.

By the closing decades of the sixteenth century, Europe was at the height of the Renaissance, and its view of itself and its relations with the rest of the world was starting to change drastically. Such changes were reflected in the new reasons why Europeans were traveling to the rest of the world.

Travelogues written by Europeans visiting Palestine after that period point to a shift in Europe‘s relationship to the region. Where medieval pilgrims had often wept or gone into trances upon their arrival in Jerusalem, modern European visitors observed with curiosity what was before their eyes. They were traveling for pleasure and for cultural experiences; tourism was gradually replacing pilgrimage as a motive for visiting Palestine. By the end of the seventeenth century quite a few European tourists had already been to Jerusalem. The most famous among them was Henry Maundrell, the author of the book A Journey from Aleppo to Jerusalem in 1697.

The book would prove to be one of the most popular books about the East for centuries to come. By 1749 seven editions in different European languages had appeared, and sections of the book continued to appear in collections of travel writings published both in the eighteenth and the nineteenth centuries.[2] The lure of printed books in Europe and its American colonies might partially account for the initial popularity of A Journey, but it can not explain why the book remained popular for the more than two centuries after its original appearance. The latter could be explained by the fact that the book is the narrative of a tourist rather than that of a pilgrim, unlike the many other Palestine travel narratives that appeared before it.

In many ways, Maundrell‘s book is an example of the new genre of travel writings on Palestine that was emerging at the time. The book is not a guide to the holy sites so much as a diary kept by the author in which he reflects on the things he saw and did. It is not divided into chapters devoted to different locations, but is organized chronologically in relation to the journey itself. It starts with Maundrell leaving Aleppo on 26 February 1696 and ends with his return to the same city on 29 April of the same year. This type of writing was common among Muslim travelers to Palestine (such as Nasir-e Khusraw), but not among medieval Christians who visited Palestine.

Although Maundrell‘s narrative was not that of a pilgrim, he did proclaim that the purpose of his journey was pilgrimage.[3] After all, he was the chaplain of the British Levant Company in Aleppo, and he was visiting a land revered by his faith. Yet Maundrell was also keen on illustrating how inspired he was by the new scientific spirit that was sweeping Europe. And his presence in the region was tied to European economic expansion. The accounts he presents of Biblical sites reflect his fascination with both science and Biblical history at once. His narrative presents the reader with detailed geographical information about roads and distances. At the same time, whenever the place he mentions has some Biblical significance, Maundrell includes verses from the Bible that relate to the site. Thus, despite the fact that it is a travelogue, Maundrell‘s book has the aura of a scientific scholarly work on biblical history as well.

Whenever he visits a place mentioned in the Bible, Maundrell pays careful attention to all kinds of details concerning the physical location. For example, upon arriving at Jerusalem from the north, he observes that while the land in the region is rocky and hilly in nature, the people till the soil in a way that improves the land and makes it better fit for cultivation. Then he notes that, in contrast, the salty plains adjoining the Dead Sea are not as fruitful. Therefore, the inhabitants of the latter area have been inclined to engage in the production of honey, as Josephus had observed.[4]

Despite Maundrell‘s interest in Christian history, he has an antagonistic attitude towards local Christians throughout his book. "Poor and pitiful" is his description of a local church that he visited on his way to Jerusalem.[5] No doubt his scorn was connected with Protestantism‘s general attitude towards Catholicism. But his attitude also reflects the general European disregard for native populations and their ways of life. Narratives written by the new European visitors often paid little attention to the actual lives of the people they encountered in Palestine if compared with the attention given to the archaeological ruins and the historic sites. Maundrell‘s narrative is merely an early example of European disinterest in the indigenous population of Palestine.

Maundrell‘s portrayal of the local Christians would be repeated by many nineteenth-century travelers to Palestine. He depicts the Christian Holy Land as harboring a decayed and misguided form of Christianity. For instance, he describes the patriarch of Damascus as a mean person with nothing extraordinary about him.[6] His attitude to local Christians is ironic in light of the fact that his mission as the chaplain of the Levant Company in the region was to serve not just the company staff but also the local Eastern Christians.

As a memoir of a journey taken more than three centuries ago within the Arab lands of the Ottoman Empire, Maundrell‘s narrative offers its readers a glimpse of life in Syria and Palestine at the time. This is particularly important because no more than a handful of studies actually focus on this particular period. For this reason this book is important for historians of Palestine, Lebanon and Syria. At the same time, Maundrell‘s narrative offers a rather narrow view of social and cultural life in the region, mainly because it is essentially a memoir of a journey. Like all memoirs, what it has to offer relates more to its author and his reaction to the things he saw and did than to how life was then. This is especially true in this case because Maundrell was a tourist who spent only two months traveling in a region he knew very little about.