The Meaning of Memorialization 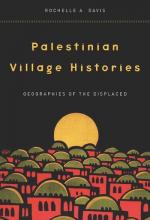 Rochelle Davis tells us that she took ten years to research and write Palestinian Village Histories. For a Western scholar to have read and analyzed 112 of the 120 village histories published, as well as interviewed many of the authors, is in itself a rare achievement. If we add to this a range of scholarship that takes in the literature on memory, identity, postmodern anthropology, and Arab, Islamic, and Western historiography and textual criticism, we can only admire a tour de force. Davis’s object of study is not the villages that the books memorialize but what their memorialization means, why this process began at a specific moment (the mid-1980s), how the books were produced, by whom and for what audiences, how they are read and responded to, and what power relations they reflect. While challenging dominant Zionist narratives, the village histories, she writes, also express “Palestinian men’s authoritative perspectives within dominant definitions of what constitutes history . . . attempts at the ascendancy of certain families within local social structures; and . . . the pervasive and silencing presence of certain social values” (p. 17).

Each chapter of Palestinian Village Histories emphasizes a different aspect of the historicity, community and national embeddedness, motivation, and silences. The first chapter “Geographies of Dispossession” sets the historical, disciplinary, and human framework through which Davis approached her topic. Subsequent chapters deal with the different ways the village books relate to national struggle; the way they reflect original and current values; authors’ and readers’ aims and reticence in representing the past; the place of the village books in a distinct tradition of Arab history-writing; their display of ownership through minute descriptions of property and landscape; and the relationship between village places and their inhabitants’ identity. Davis interweaves these themes with her encounters with authors and diaspora communities, as she searches for publications often hard to find.

Although Palestinian Village Histories is thoroughly academic in its multidisciplinary reach and rigor, it is also extremely readable. Davis begins each chapter with an anecdote that takes the reader into the living heart of her material, for example, by opening the first chapter with a recent court case involving the eviction of Mizrahi families from what is now Kafr Shalem (Salama), raising to the surface the Israeli state’s settlement of immigrants on land owned by Palestinians. The chapter on “Village Values” begins with a project given to school children in Syria asking for facts about their villages of origin. Their elders, remembering the village in terms of ethos and attachment, could not provide such “scientific” information. The assignment made both children and adults reconsider what knowledge they should have about their past (pp. 64–65).

The village books mark Palestinian history in both obvious and subtle ways: life in pre-1948 rural Palestine as remembered in exile; the Nakba when the villages became “objects of memory” through their erasure; the post-1948 period when Arab nationalism eclipsed memory of particular localities; the days of PLO predominance (1960s and 1970s) when the Resistance adopted the peasant as mobilizing symbol but neglected the rural population in its meta-narratives; and then the PLO’s transfer to Tunis (1982), followed by the Oslo accords of 1993. It was these last two dates (1982 and 1993) that set in motion the memorialization of villages, through deepening the fissure between the national leadership and the refugee masses. The first two village books (on Duwaimeh and ‘Ajjur) appeared in 1985, marking this transition. Up to 1982, the national liberation struggle had subsumed the issue of refugee return; after it, the refugee stratum was sufficiently cut off from “a compromised PLO” to insist on recapturing self-representation. Set in this historical sequence, the village books appear as part of a long class struggle waged first by the rural population before 1948 against feudal landlords, and later as refugees against a national movement that abandoned them when the PLO “anchored itself in the West Bank and Gaza” (p. 58).

Historic change also shows up in rising educational levels that transformed some descendants of villagers into historians. Most authors of village books are men who took up writing after retiring from teaching, often from camps, usually from the villages they write about: an “educated local elite . . . [who] remain enmeshed in and an inextricable part of their small communities” (p. 5). In a few cases, such as the book about Salama by Abdel Aziz Saqr, the author could describe the village from having lived in it, but more often authors are second-generation refugees who compiled their studies by listening to parents and elders. In rare cases, such as the series produced by Birzeit’s Centre for Research and Documentation, the studies were carried out by trained researchers. Thus authors mainly “belong” to the village in question, and to the networks formed by the village’s descendants across the diaspora. It is to them, and to future generations, that the village books are primarily addressed.

Davis conveys well the often fractious relations between authors and readers, the pressure of community values, competing versions of family property or prestige, and the editing needed to avoid hurting particular families through reports of poverty, land sales, or collaboration. Readers are important to the village book authors as sources of information, fellow members, and partners in producing an accurate representation. Their corrections are solicited and incorporated in second editions, when these can be afforded.