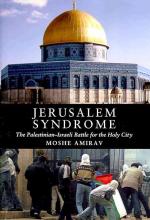 Zionism, like other ethnically based nationalisms, has at its heart a contradiction that undermines the state-building exercise. At the same time as consolidating the Israeli Jewish position, Zionism excludes non-Jews and leaves them at the margins of the state. In an ethnically diverse city like Jerusalem this has led to major flaws in Israeli policies. The very policies that are designed to assert the Jewishness of the city also undermine its control. By showing preference to Jewish areas, residents of Palestinian areas seek alternative forms of support and representation outside of the state’s structures. Because Israel invests state and municipal funds in Jewish areas only, Palestinians seek and receive funds from religious groups, the international donor community, Arab states, the EU and the Palestinian Authority. Thus, a more inclusive set of policies, which recognized the religious and ethnic plurality of the city, may have been more effective in establishing Israeli political control over the eastern part of the city than those Zionist-inspired ones which have served simply to alienate and Palestinianize East Jerusalem. The fact is that despite forty-five years of total military and political control, huge public investment and dramatic population changes, East Jerusalem is not much closer to being an Israeli city than it was in 1967.

For all its flaws in organization and structure, Jerusalem Syndrome does an expert job in revealing this contradiction in Zionism and the gradual failure of Israeli policies in the city since 1967. The author, Moshe Amirav, is the quintessential Jerusalem insider and the strength of this book lays in his detailed knowledge of the Israeli policy debates over the whole period of Israeli occupation of East Jerusalem. He was a former member of the Likud party Central Committee, a confidant of former Prime Minister Yitzhak Shamir, a colleague to former Mayor of Jerusalem Teddy Kollek, an advisor on Jerusalem to former Prime Minister Ehud Barak at the Camp David summit in 2000, and negotiation interlocutor and later friend of PLO leader Faisal Husseini. It is an impressive pedigree, which does not disappoint in terms of the material presented and analyzed.

Amirav’s thesis of Israeli failure in East Jerusalem may surprise those who are accustomed to the daily media focus on land confiscations, house demolition, deportations, exclusions, security restrictions, settler violence, and discriminatory municipal budgets and racist policing. His main contention is that while it is normally the Palestinians who are portrayed as hapless tacticians who repeatedly fail to strike a deal when it is advantageous for them, it is in fact the Israeli leadership that has squandered many opportunities to advance Israeli interests in Jerusalem. He cites how the discussions on Jerusalem with Egyptian president Anwar Sadat (p. 126) were torpedoed by Israeli prime minister Menachem Begin only to be followed up some years later by the “London talks” between King Hussein of Jordan and Israeli foreign minister Shimon Peres, (pp. 118, 130), which in turn was vetoed by then Prime Minister Yitzhak Shamir—who also squashed the Amirav-Husseini proposals on the city a few years later. Each initiative, Amirav shows, was less beneficial to Israel and was an attempt to rein back the long-term deterioration of its position.

Despite the headline figures of population shifts and housing construction for Israeli settlements, Amirav documents the failure of Israeli policies on two levels: on the ground and in the diplomatic arena. The chief effect of Israeli settlement policy and the construction boom has been to suck in Palestinian labor from the hinterland (pp. 86-87). The resulting increase in the Palestinian population of the city is leading to what Amirav describes as the creation of a “bi-national city” by 2020 (p. 99). While Amirav may be overstating his case, the political implications of this failure, nevertheless, have been evident in the emerging Israeli discourse on conceding Palestinian areas to the new Palestinian state.

Diplomatically, the Israeli leadership—according to Amirav— has also played their cards poorly. The refusal to seriously pursue the Jordanian option in East Jerusalem led to the Palestinianization of the population who after the first intifada looked to the PLO for leadership and representation. Then, by signing the peace treaty with Jordan in 1993, Israel played into the hands of the PLO leader, Yasir Arafat. The treaty conferred upon King Hussein of Jordan the mantle of custodian of the holy places of Jerusalem, which further alienated the moderate Arab states such as Morocco, Egypt, and Saudi Arabia, who felt obliged to bolster Arafat’s position on Jerusalem. The Palestinian role was therefore elevated to that of defender of the interests of the Muslim world. Then later, in 2000 at Camp David, Barak introduced to the negotiations the idea of a Jewish place of worship in the Haram al-Sharif, which transformed the question from a political to a religious one (p. 153). The end result was a hardening of Palestinian positions and the failure of the summit.

Jerusalem Syndrome would have benefitted from some judicious editing. It carries the hallmark of a publication comprising a synthesis of essays and presentations. There are frequent repetitions; the same facts are often recycled through the book without reference to their previous use and political personalities are introduced several times. This rather shoddy editing culminates in the penultimate chapter, “The Struggle over the Holy Places,” which repeats much of the previous chapters on this topic and one suspects was included to pad the book. Finally, for all his expertise on Israeli policy debates, Amirav perpetuates the British Mandate error of referring to the Dome of the Rock as the Mosque of Omar (pp. 13, 159), when the latter is located beside the Holy Sepulchre. Overall, Amirav has assembled a flawed yet fascinating analysis of the evolution of Israeli policy on Jerusalem.