Hammer: Palestinians Born in Exile: Diaspora and the Search for a Homeland 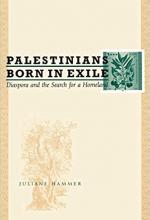 Juliane Hammer’s book is a welcome addition to the relatively meager literature ‎on Palestinians who were born in exile and “returned” to Palestine, most of them ‎following the Oslo agreements in the 1990s. Hammer, an assistant professor of religious ‎studies at Elon University in North Carolina and co-author, with Helena Lindholm ‎Schulz, of Palestinians in the Diaspora: Formation of Identities and Politics of ‎Homeland (Routledge, 2003), explores the heterogeneous experiences of middle class ‎Palestinians between the ages of sixteen and thirty-five in the Ramallah/Jerusalem area in ‎the West Bank as they confront the “real” Palestine as place and society. Inevitably, it is ‎also a book about the reproduction of Palestinian identity, as returnees cross real and ‎metaphorical boundaries traveling between home and homeland, the national and ‎transnational, and the spaces in between. By targeting returnees born in exile, the author ‎proposes that her work goes beyond the usual focus on Palestinian refugees, to include ‎other patterns of Palestinian “migration.” However, Hammer’s avoidance of the term ‎‎“refugee” has political and legal ramifications, and it diminishes from the fact that many ‎of the returnees are also refugees. ‎
The author’s main conceptual arguments hinge on distinctions made between the ‎‎“Amrikan” and the “Aideen”: Palestinians born in western and Arab host countries ‎respectively. She posits that in general, for the Aideen, Palestine is al-watan—the ‎national homeland, implying a “political” sense of belonging. For the Amrikan, Palestine ‎is al-balad—the “cultural” homeland. The author examines selected spaces that facilitate ‎integration with the “locals,” such as schools and cafes, but these were limited. ‎Sometimes, her distinctions seem arbitrary and loom larger than the pervasive divisions ‎created by the Israeli policies that literally have shredded the West Bank and Gaza into ‎isolated cantons.
Hammer creatively draws on anthropologists Arnold Van Gennep and Victor ‎Turner, outlining five chronological steps during which returnees “rewrite” their ‎identities. She then looks at the political, cultural, and religious/traditional dimensions of ‎identity under separate subtitles to examine what had changed in the process of return. ‎Despite her awareness of the “fluidity” of identity, she leaves an impression, albeit ‎unintended, that it is divided into discrete parts and found “within every individual” (p. ‎‎220). Her drive for clarification through classification forces her to reduce the definition ‎of culture to what is essentially folklore (weddings, food, music, etc.) and to draw ‎boundaries around interwoven concepts and processes.
‎    The author concludes that the return resulted in strengthening Palestinian identity, ‎even when the process involved a mutual adjustment between locals and returnees and ‎replaced the idealized image with a more complex understanding of Palestinian society. ‎Her study points to the need to incorporate and understand the different experiences of ‎Palestinians into present and future national policies. ‎
Hammer also discusses various literary sources that helped carve the imagined ‎Palestinian homeland and its landscape, including poetry of exile. Here she makes an ‎ambiguous observation that “Arabic is a language that is closely linked to the Qur’an and ‎thus to Islam” (p. 60). This of course is only partially or inversely true, in that the Arabic ‎language spread with the Islamic conquest beginning in the seventh century, but Arabic ‎as a language appeared many centuries before Islam.‎
The author should have given a more nuanced attention to the concept of “return”: ‎Under what conditions and to where? For example, most studies on Palestinian refugees ‎from 1948 indicate that they conceive of “return” as to their original homes and villages ‎and not to the West Bank or Gaza Strip. The context in which studies on “returnees” are ‎carried out influences not only the methodology of the research but also the ‎interpretations and conclusions. Furthermore, research on the topic would be ‎fundamentally different if the West Bank and Gaza could boast of being a sovereign state ‎and refugees obtained their right of return. Nonetheless, the author has provided readers ‎with a bit of everything on the Palestinian displacement, for example, the debates ‎surrounding diaspora and exile, and the Palestinian national narrative. Her work is a ‎reminder that it is essential to look at socioeconomic and cultural factors when planning ‎for repatriation.

Randa Farah is an assistant professor of anthropology at the University of Western ‎Ontario, London, Canada.‎