Wolfsfeld: Media and the Path to Peace 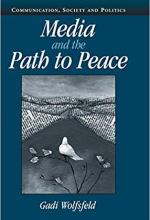 THE PRESS AND OSLO

In his latest contribution to scholarship on the politics of the news media, Gadi Wolfsfeld (Hebrew University) sidesteps the higher profile issue of war coverage and examines a less glamorous question: How do the media affect processes of negotiation and peacemaking? Using content analysis and interviews with those who create media messages-journalists, politicians, and spokespersons-he examines the constructive and destructive roles played by the media in the Israeli-Palestinian, Israeli-Jordanian, and Northern Ireland peace processes.
These roles, he argues, are shaped by a series of factors in the political and media environment, including "news values" (specifically identifying immediacy, drama, simplicity, and ethnocentrism), the level of "elite consensus" behind the process, the "number and severity of crises" that occur during the process, the level of media sensationalism, and the extent of "shared media" among the parties to the conflict. All of these factors feed into the politics-media-politics (PMP) cycle, in which "changes in the political environment lead to changes in media performance that often lead to further changes in the political environment" (p. 31). Wolfsfeld then applies these concepts to the three cases, insisting that although "politics almost always comes first," the media can and do shape the political environment when peace is up for public debate (p. 31).
Wolfsfeld places the Oslo peace process at the center of his analysis, using the Israel-Jordan and Northern Ireland negotiations for comparative purposes. His lengthy discussion of Oslo demonstrates that the Israeli media played a largely unhelpful role, worrying more about the "bottom line" than about reporting on the complexities and possibilities of the process. As the post-Oslo years unfolded, Israeli news outlets opted for increasing sensationalism and melodrama, providing saturation coverage of Palestinian violence and narrowing the range of acceptable public debate. The Northern Ireland case-where the media environment was "more conducive to peace" (p. 159) and where political support for the process was broader-provides Wolfsfeld's contrasting example, with the Israel-Jordan case lying somewhere in between the two extremes.
Although Wolfsfeld admits that he was not "sufficiently knowledgeable" to examine the Palestinian media in depth (p. 4), he nonetheless makes a number of confident generalizations about its "undemocratic" nature, thus reifying a questionable distinction between "free" (Israeli) and "controlled" (Palestinian) media environments. Much of his analysis, however, actually demonstrates that only a few Israeli journalists-he singles out Amira Hass and Gideon Levy-seem to exercise any sort of freedom. The rest act, in effect, as if they were not "free" at all; that is, they act the way he implies that Palestinian journalists act.
Indeed, the picture that emerges from the book is one of an Israeli media system that is quite controlled ideologically and over-determined by its failure to acknowledge the realities of Israeli state power. Wolfsfeld reflects this situation in his own writing. On the one hand, he rightly points out the ethnocentrism of the Israeli media, with its failure to hire Palestinian journalists and its preferred focus on Palestinian violence. On the other hand, he provides almost no detail on any acts of official Israeli violence, leaving the reader with the misleading impression that most of the violence committed since Oslo has come from the Palestinian side. Similarly, he uses the word "terrorism" only to refer to Palestinian acts, ignoring the growing literature that critiques this term's tendency to naturalize and justify the violence of the strong by occluding its extent and its effects.
More generally, Wolfsfeld's rather mechanistic approach has the effect (however unintended) of allowing the most fundamental issues-the corporate structure of most major media, the militarization of politics and political discourse, the overwhelming power exerted by the U.S.-Israeli alliance, the deeper structures of ideology and language-to recede into the background, where they simply appear as givens. Consequently, the suggestions he provides in a concluding chapter, while generally welcome, appear to skirt the most important factors that shape all news coverage.
In the absence of a more critical treatment of the issues, the book's primary value lies not in the breaking of new theoretical ground (readers seeking this will need to go elsewhere), but rather in the details gleaned through interviews with journalists who often express frustration at their own inability to do meaningful work within a system of professional and ideological constraints. In this sense, Media and the Path to Peace provides further illustration of what critical media scholars established long ago: That the news media are primary mechanisms for the reproduction of asymmetrical structures of power and the creation of "acceptable" subjectivities. _________

John Collins, an assistant professor of global studies at St. Lawrence University, is the author of Occupied by Memory: The Intifada Generation and the Palestinian State of Emergency (2004) and co-editor (with Ross Glover) of Collateral Language: A User's Guide to America's New War (2002), both published by New York University Press.