Kimmerling and Migdal: The Palestinian People: A History 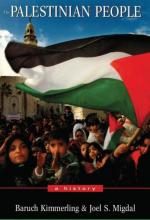 The Palestinian People: A History is an expanded and revised edition of a work first published in 1994 as The Palestinians: The Making of a People. Its republication follows that of an expanded Hebrew edition, which was translated into Arabic by MADAR, the Palestinian Center for Israeli Studies in Ramallah. Its authors are Baruch Kimmerling, professor of sociology at Hebrew University and one of the most prominent post-Zionist sociologists in Israel, and Joel Migdal, professor of international relations at the University of Washington. Each author has written a number of important works on identity, land, and politics in Palestinian and Israeli societies.

This joint effort presents a wealth of readable material on the social and political history of the Palestinian people over a period spanning the past two hundred years. Kimmerling and Migdal regard the popular uprising in 1834—when the Palestinians rebelled against Ibrahim Pasha, son of Muhammad Ali, the powerful Egyptian ruler who occupied Palestine—as the beginning of modern Palestinian history because this event was the first political movement to unite society’s three social groups—rural peasants and their leaders, urban notables, and bedouin—in an armed uprising that extended throughout Palestine. The authors see Palestinians as endeavoring since that revolt to construct themselves as a people, both during the period of the British Mandate and under the oppressive influence of Zionism, which sought to create a political entity with no place for Palestinians. They view the challenges imposed by the Zionist movement and the establishment of the State of Israel as decisive in the formation and shaping of Palestinian identity.

The first edition of this book received considerable praise as the only academic work that covers in depth both the early modern and contemporary history of the Palestinians. It also is important for the authors’ implicit adoption of the 1834 revolt as the starting point for awareness among Palestinians that they belong to a national collective. This perspective differs significantly from that of many Palestinian and Israeli historians, who place the inception of such awareness at the beginning of Zionist settlement in Palestine in 1882 or at the commencement of the British Mandate.

Israeli and Zionist mainstream historians criticized the book as one that undermined the Zionist narrative. The point about the start of Palestinian national consciousness, in particular, roused the ire of those Israeli historians who refuse to recognize the existence of a Palestinian people as early as 1834. Conversely, some Palestinian historians—still few in number—actually date the beginning of modern history for the Palestinian people in the second half of the eighteenth century, when Thahir al-‘Umar ruled the north of Palestine and the coast from Acre. They contend that the experiment gave birth to clear signs of political awareness as well as to tangible development in the transformation of the economy.

Although the authors did not rely on primary sources, they utilized extensive secondary literature to produce a precise analysis based on political sociology, a rare approach in historical writing about the Palestinians, and it gives the book a distinctive character. Further, their analysis and division of material is more topical than historical narrative. To compensate for the lack of sequential flow, they have appended a lengthy chronology of the most significant events. Moreover, their language is both simple and penetrating. For these reasons, the first edition unsurprisingly has become a reference work

The above notwithstanding, this readable and useful book has genuine problems that stem from the theoretical and methodological framework that the authors occasionally employ, their political motives, and empirical errors. For example, although the authors at times offer harsh criticism of Zionist and Israeli practices, they couch this criticism within their understanding of Zionism as a national liberation movement rather than as a colonial settler project. Moreover, their study of nineteenth-century Palestinian society—which comprises a large section of the book—falls within the framework of modernization theory. There is veiled admiration for the progress of Zionist colonialists as compared with the “backwardness” of Palestinian peasants (pp. 23–25), even though economic historians have shown that such a comparison is unjustified. For instance, they confuse Palestinian peasants’ traditional agricultural methods with subsistence agriculture. While agricultural methods and techniques mostly did continue without change, they were appropriate given the nature of the soil in the mountain regions where most Palestinian peasants used to live.

European consular sources document that Palestine produced large agricultural profits and was integrated into the global economy as a source of wheat, olive oil, soap, and cotton between 1856 and 1882 (prior to the advent of Zionist colonies). Indeed, Palestine had been partially integrated into the global export market since the mid-eighteenth century. Contrary to Kimmerling and Migdal’s assertion, the 1878 failure of Betah Tekfa, the first Jewish colony in Palestine, did not stem primarily from malaria, but rather from the failure of the settlers themselves, who lacked the skills to compete with their Palestinian neighbors when both groups were producing the same crops. Were it not for the millions of English pounds that Rothschild gave the first settlers, the Betah Tekfa colony would not have reopened in 1882, and the other settlements could not have survived.

The authors also focus more than necessary on divisions within Palestinian society, particularly between countryside and city, coastal versus interior cities, and among social classes. This focus seems to contradict their discussion of Palestinian society’s harmonious unity in opposition to the Zionist project between the two world wars (p. 37). Throughout, the authors try to present a “balanced” narrative to narrow the wide gap dividing the Palestinian and Israeli histories. Perhaps they do not wish or are unable to present a narrative that goes beyond left wing and liberal Zionist historiography; or perhaps their narrative stems from a virtuous desire to achieve peace between Israelis and Palestinians by bridging this chasm. At times, however, this makes their narrative read like a history supermarket where one can find almost everything.

Kimmerling and Migdal sometimes make questionable assertions, such as: “The mandate’s goals regarding village society were often the same as those of the Ottomans. In fact the British openly adopted nineteenth century Ottoman legal precedent—specifically, the Ottoman Vilayet Law of 1913—as its benchmark for governing Palestine. Like the Turks, they sought more tax revenue, a more efficient land registration system, a break-up of the co-owned musha` land, enhancement of the mukhtar as the official arm of government in the village, and more productive agriculture generally. What differed was the greater British efficiency in carrying out its rule” (pp. 31–32).

In actuality, Palestine underwent drastic legal transformation under the Mandate. The Mandate authorities not only sought taxes and revenues like the Ottomans, but they also imposed a system of colonial rule that supported the Zionist movement, whose stated goal was the complete transformation of Palestine’s land policies and society for the sake of establishing a Jewish state. Contrary to their claims, the British and Zionist desire to destroy the musha` system in Palestine did not in any way aspire to improve the position of Palestinian peasants (p. 18). Rather, their goal was to eliminate a system that prohibited, in practice, the transfer of land from Arabs to Jews and that was supported by a social network rooted in solidarity and cooperation, a system that Zionism sought to destroy at any cost. Since the nineteenth century, the course of Zionist settlement and land appropriation in Palestine developed parallel to the shift from the musha` system to private land ownership.

The authors’ account of the 1948 war does not go beyond that of Israeli historian Benny Morris, i.e., a schizophrenic narrative that fluctuates between empirical findings and assertions. Palestinian refugees, for example, are described as “displaced,” and the authors mainly avoid interrogating Zionist-Israeli policies by resorting to the formulaic phrase, “evidence is far more equivocal.” Their material on the 1967 war omits essential and relevant information, such as the Israeli government’s appointment in 1964 of General Haim Hertzog as future military governor of the West Bank. Such missing information is crucial, because it fundamentally alters one’s understanding of the Arab-Israeli conflict.

The chapter devoted to the Oslo negotiations and accords skips over necessary information about the Washington talks that followed the Madrid Conference as well as the personal reasons that prompted Yasir Arafat to bypass the Palestinian delegation. Moreover, the authors deal delicately with the incompetence of Palestinian negotiators during the Oslo negotiations and the subsequent failure of the Palestinian Authority to manage conflict. However, they do put forth many significant reasons for the failure of the political process and clearly illustrate Israel’s responsibility in it: the absence of an external power to act as a genuine impartial arbitrator between the two sides; the unequal balance of power between the two sides; and the failure of both Palestinian and Israeli leaders to communicate to their respective constituents the truth of their situation and the painful compromises necessary to reach a peace agreement. The authors also explain how, despite Oslo, the Palestinians find themselves in a situation of increased Israeli settlement and land confiscation, as well as a decline in their per capita income.

A definitive appraisal of Kimmerling and Migdal’s book is difficult. On the one hand, the authors are historians who do not subscribe to the traditional Zionist historical perspective, lean toward an understanding of Palestinian suffering, and contribute to an area in which much research is needed. On the other hand, they are unable to traverse a certain boundary, and this leads to some confusion. Thus, although this book bears witness to the post-Zionist phenomenon, it does not necessarily assume a hostile stance toward Zionism or question its central tenets of denying legitimate rights to the indigenous Palestinian people. While reconciliation of historical narratives is welcome, history must not be politically compromised in the process. Israelis, particularly historians and politicians, must learn from the experience of South Africa: Acknowledgment of tyranny and oppression precedes reconciliation and forgiveness.