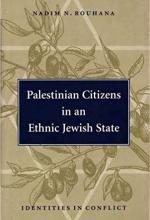 If anyone had trouble understanding the causes that led to the October 2000 killing of thirteen Palestinians citizens in Israel by the Israeli security forces, this book provides solid, well-researched, and direct answers. As the author notes at the outset, "In a multiethnic state, unless citizenship emerges as a common and equally meaningful identity to the various ethnonational groups, conflict becomes inevitable; but whether citizenship emerges as a source of emotional attachment depends to a large extent on the ethnic power structure of the state" (p. 6). Thus, whenever collective identity fails to supersede ethnonational identity, conflict can result, as demonstrated in the cases of Cyprus, Northern Ireland, and Sri Lanka. Rouhana uses social, cultural, political, and formal legal factors to analyze the complex components of collective identity (loyalty, sentimental attachment, shared historical experience, pride, sense of common fate, and belonging). Collectively, however, identity also is affected by state structures and regional and international developments.
With respect to the Palestinians who live inside Israel, Rouhana finds that these Arab citizens live in a "constitutionally exclusive ethnic state" (p. 31). The structural and legal arrangements that allow for the exclusion, as well as the dynamics of ethnic policies that Rouhana comprehensively identifies, leave no doubt that the state has manipulated and disguised its security concerns to control its Arab citizens. However, the author's discussion of democratic expressions--a central factor that shaped the government's propaganda and influenced most Israeli scholars who have researched Arab citizens--is inadequate. The reader would have benefited greatly from a more expanded and critical discussion of this issue. The chapters dealing with the control of internal movements and regional development present no new data, although Rouhana skillfully connects the various factors in each dimension with the shaping of Arab collective identity in Israel.
The author has written numerous articles about the status and identity of Israel's Arab citizens. Building on this extensive research, his first book is comprehensive, well organized, and addresses the past, present, and future status of Palestinians inside Israel. In fact, Rouhana sheds significant light on the complex meaning of collective identity among the Palestinians in Israel. In this respect, the book provides a much-needed and solid critique of such Israeli researchers as Sami Smooha, who regularly survey attitudes of Arabs in Israel and argue that either they have internalized Israeli identity (accommodationist approach) or they are becoming more Palestinian (radicalization approach). For instance, through his qualitative and in-depth interviews with leaders and grassroots activists, Rouhana explains the distinction between "Israeli Palestinians" and "Palestinians in Israel." In contrast to conclusions reached by other researchers, Rouhana shows that the meaning and function of using "in Israel" indicates that the Israeli aspects of the identity are mainly instrumental and lack affective or emotional attachment.
Through the accentuated identity model, Rouhana captures the development and meaning of collective identity among the Arabs in Israel. "The accentuation (but not the origin) of Palestinian identity is partly a response to the state's denying its Arab citizens the possibility of integrating an Israeli identity--other than performing the psychological contortion of feeling they belong to a state that defines itself as belonging to others but not to them" (p. 147). As a result, Arabs in Israel do not share any collective national experience with Jewish citizens. In fact, not one national museum, national holiday, or national symbol is shared between Arabs and Jews (p. 148).
In his conclusion, the author bluntly states that "the identity of the Arabs in Israel is doubly incomplete" (p. 217). On the one hand, neither their Palestinian nor Israeli identity is complete due to the absence of social, cultural, political, and formal legal structures and their lack of sentimental attachments to Israel. On the other hand, Rouhana's findings indicate that there are differences in social values between Arabs in Israel and Palestinians in the West Bank and Gaza, although, as the author suggests, these differences need to be examined further. These differences have significant implications for collective identity and the labels used by outsiders and insiders. This differentiation prevents Arabs in Israel from fully completing their Palestinian identity.
After rejecting exclusivist options, the author focuses his discussion on equal citizenship and the development of a democratic civil state. He suggests the negotiation of a shared citizenship as a supraidentity that can bind the two ethnic groups and allow both to experience their national ethnic identity. However, as a practitioner of conflict resolution, I must indicate my disappointment with how little Rouhana offers by way of practical guidance on ways that the few Arabs and Jews who believe in such an option actually may promote it.
In summation, it can be stated that no other scholar has examined Arab-Jewish relations in Israel from such a detailed social-psychological framework. In this sense Rouhana's book is a pioneering text. In addition, within the context of research on Palestinians in Israel, this book is certainly among the few written by Palestinians or Israeli scholars who recognize the inherent structural conflict between the nature of the Jewish state and the collective aspirations and rights of its Arab citizens. The research and analysis in this book constitute a major development in the study of Arab-Jewish relations in Israel, a contribution that has been made only by a few scholars such as Ian Lustick (Arabs in the Jewish State: Israeli Control of a National Minority [University of Texas Press, 1980]), Sami Mari' (Arab Education in Israel [Syracuse University Press, 1978]), and Elia Zureik (The Palestinians in Israel [Routledge, 1978]).