Hamzeh: Refugees in Our Own Land 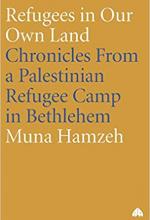 This book actually is composed of two texts: the first, a war diary of the al-Aqsa intifada by the Dahaysha refugee camp-based journalist Muna Hamzeh; the second, a compilation of her previously published articles detailing the vagaries of the post-Oslo period through stories of everyday life in the same camp. This makes for a rather clumsy book, as there is no attempt to weave together its two distinct parts. The placement of the intifada diary before the articles presenting the human view of the backdrop that led to the 2000 uprising only adds to the disjointedness. As such, it makes more sense to read this as two separate texts, each with its own logic, value, and constraints.
The diary is a compilation of the daily emails that Hamzeh wrote from the ground zero of Dahaysha during the first few months of the intifada. These messages gave thousands of people around the world a window into the everyday rhythm of life, events, and concerns of Palestinians struggling under Israel's latest declared war. It is a war diary, albeit a peculiar twenty-first-century version. So many of the dramatic events experienced by the diarist actually are refracted through the lens of television and radio broadcasts, Internet news, and telephone calls. Thus, firsthand experience of events and secondhand experience received through the media begin to take on the same level of reality. In Dahaysha, hearing the actual bombing of nearby al-Khadir village becomes an experience of equal reality to watching the shelling of Ramallah police station on CNN. There is no longer any spatial demarcation of experience--what is happening in Jinin, Khan Yunis, or Nablus seemingly also is happening in Dahaysha as well. This immediacy of events and the blurring of where they are occurring in space and time due to the overwhelming presence and constant coverage by television (as well as access to telecommunication technology) is clearly a distinctive marker of this intifada for the population as a whole. It emerges much more intensely in Hamzeh's texts, however, in part, because her diary was also an attempt to provide a daily news roundup of events taking place throughout the occupied territories.
The strength of the diary is in Hamzeh's ability to lay bare the whole spectrum of human emotion that she, her neighbors, and friends undergo as the relentless series of events unfolds. The euphoria felt at the outset of the intifada is replaced by dismay when it seems Arafat may sign a cease-fire agreement at Sharm al-Shaykh. Visceral fear of Israeli shelling and terror of settler attacks is interlaced with deep pain at the loss of yet another young life. Exhaustion, hopelessness, and bitterness are the constants.
Missing, however, is an overall sense of the texture of the larger community and the people who inhabit it. Neighbors and friends express feelings and opinions, they exchange fears and news, but they remain strangely disembodied. We know them only through their subjective relation to the diarist, not as people who have personal histories or who inhabit a larger social world. This absence is redressed partly in the second section of the book.
Between 1988, when she decided to return to Palestine, and December 2000, when she made the painful reverse journey back to the United States, Hamzeh regularly published a range of reports and essays. The selection offered in the second part of the book showcases her strength as a writer--the ability to encapsulate the larger sense of things through the small human story. The tribulations of two older women from Dahaysha sneaking into Jerusalem to attend Friday prayers lays bare the human reality of Israel's "closure" policy. An argument among families over receiving the honor of providing the traditional wake meal for a deceased relative becomes a sensitive discussion of how Palestinians cope with death. A mother's choice of a bride for her son brings home the ongoing attachment of refugees for their lost communities.
Throughout the book, the writer's emotional attachment to her adopted community in Dahaysha is obvious. While in the diary her feelings tend to overwhelm the story being told, in the articles her empathy allows the stories to speak for themselves. The insight made possible by empathy is suggested by her eloquent comment that "Whenever Palestinians celebrate any type of a national or religious event, it is hard to watch them and not feel an overwhelming surge of compassion" (p. 125).