Thomas: How Israel Was Won 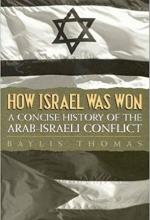 Baylis Thomas, the author of this short and often fiery study of the Arab-Israeli conflict, holds a Ph.D. in psychology and is currently in private practice in New York City. How Israel Was Won is the product of research done in the context of a professional writing group that included three history professors, a sociologist, and an English professor. The cover of the book claims that this is the only book one needs to comprehend the complexities of the modern Middle East and that it is a well-balanced presentation that synthesizes for the general reader a vast number of historical studies and recently declassified documents.
As suggested by the title, the work is a study of the Arab-Israeli conflict focused primarily on Israel—how it was created, grew, ultimately became the hegemonic power in the region, and continues to grow. Unlike most studies focused on Israel, however, this one is far from sympathetic to that country. In his introduction, Baylis cites the centrality of what Avi Shlaim calls the "Holocaust syndrome" in popular Western perceptions of Israel's struggle. Most Americans, including the author, have tended to see the demand for a Jewish state as a response to the Holocaust and the resultant Palestinian and Arab resistance as an extension of Nazi aggression (p. xv). Thomas, after his research, ends up strongly disagreeing with this view.
His work is primarily a political and military history dealing with the Middle Eastern and global contexts within which the conflict proceeded during the twentieth century. It depends rather heavily on a number of Israel's "new historians" to debunk the notion of an Israel perpetually on the defense. Using primarily the work of Nadav Safran and Avi Shlaim, with lesser dependence on Benny Morris, he debunks the myths built by Israelis around their "War of Independence," including their putative acceptance of the 1947 Partition Plan, "monolithic" Arab attempts to destroy the fledgling state, the balance of armed forces, and the creation of the Palestinian refugee problem. He details Israel's planned aggressiveness in launching the 1956, 1967, and 1982 wars. The final chapter chronicles what Thomas sees as Israel's success in using Oslo to assure that the bulk of the Palestinian population remaining on the West Bank is "effectively contained on island 'reservations' in a quasi-apartheid existence," while a much larger number remain scattered as unwelcome refugees in surrounding Arab countries (p. 279). Thomas concludes that while what he calls local-level terrorism will continue for the foreseeable future, the Arab-Israeli conflict in the macro sense has ended, because no Arab states or superpowers are interested in the Palestinian cause and because the UN does not wish to become involved (pp. 277-78). "The classic narrative story is that in which the conqueror, civilized and peaceable, somehow manages in self-defense to end up victorious over a lesser people who unwisely resisted the conqueror's civilizing mission and Providential taking" (p. 279).
Aside from questioning the author's conclusion that the conflict over Palestine is now winding down, some readers will also wonder why, given the centrality of the "Holocaust syndrome" in the narrative, he has not spent more time on the difficulties Zionism and Israel actually encountered in incorporating the Holocaust into the national narrative. In spite of the exciting and provocative introduction and conclusions, the book contains little about ideology. Nor does it deal seriously with sociological, economic, or other key aspects of the two peoples' evolution over the past generations. Class, regional, religious, and other differences in Palestinian society, as well as the impact of the widely different experiences of diaspora Palestinians, play little or no part in this narrative. Nor does the author demonstrate control over the basics of the post(World War II Middle East system. The impact of the Pan-Arabist dynamic during the first twenty-five years is totally passed by and takes all meaning away from the critical year 1958 with the creation of the United Arab Republic and the reactions of Iraq, Jordan, Lebanon, and the Eisenhower administration. His statement that the Strait of Tiran in 1967 was of little economic importance to Israel is incredible; the tankers whose oil poured into the pipeline at Elat provided the main source of energy for Israel's burgeoning economy. Beyond such fundamentals, the factual errors are too numerous to count, but include such incorrect assertions as Arafat came from a family of considerable privilege and spent seventeen years in a refugee camp (p. xv); the Soviet Union was encircled by Arab states (p. 143); the socialist regime ended in Algeria in the 1960s (p. 157); and Rabin sent a tank brigade into Gaza in May 1967 (p. 159).
One suspects that many of the misinterpretations and errors result from the author's lack of expertise in the field into which he has trodden so bravely. While I am very much in tune with his approach and agree with many of his conclusions, I would hesitate, because of such errors, to recommend this book to a novice.