Slyomovics: The Object of Memory 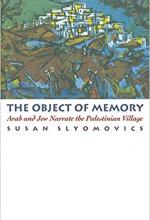 Object of Memory contemplates Palestinian and Israeli reconstructions of a single village and their respective conceptualizations of its history. During the 1948 war, the Abu al-Hayja clan living in the Mount Carmel community of `Ayn Hawd were expelled by Israeli forces and subsequently declared absentees; in the early 1950s their "abandoned" village was transformed into an Israeli artists’ colony, Ein Hod, under the leadership of renowned Dadaist Marcel Janco. Thus dispossessed, `Ayn Hawd’s Palestinians came to memorialize their village in spatial terms by, for example, building a new village, dubbed “New `Ayn Hawd,” in the vicinity of the original, and by extending their village’s system of guest houses to the sites of their exile. Meanwhile, the new Israeli Jewish residents turned the village into a tourist destination where visitors could gaze upon contemporary Israeli art set amid pristine Arab “ruins.”
Slyomovics focuses her first chapter on the memorial book, a genre that evolves out of communal catastrophes such as genocide and mass expulsion. Central to her analysis is a series entitled al-Qura al-Filastiniyya al-mudammara (Destroyed Palestinian villages) whose first volume is devoted to `Ayn Hawd/Ein Hod. She handles the hybridity of the genre, with its reliance on personal testimonies, folklore, poetry, etc., with interdisciplinary aplomb. For example, she presents a photograph of a man pointing to a village ruin (figure 1.2, p. 11) and relates this ubiquitous but powerful gesture to the theme of the “there” of the homeland—versus the “here” of exile—that recurs in the poems of Mahmud Darwish (pp. 10-12). Slyomovics also situates the Palestinian memorial book in an international context, comparing it to its Jewish, Armenian, and Bosnian counterparts. It would have been interesting to locate the Palestinian memorial book within the Arabic tradition of geographically based cultural encyclopedias, as well.
Jewish “narrations” of Ein Hod appear in the second chapter. Here the author shows how the village’s Israeli inhabitants imbued their appropriated homes and objects with historical meanings through the conservation and renovation of their structures and how they used Dada’s celebration of the nonacademic and the primitive to reconcile Zionism with vestiges of an Arab past, such that Palestinian vernacular architecture served to link the modernity of their enterprise to the antiquity of their claims to the land (pp. 41-58). Perhaps their most striking (mis)appropriation was the conversion of the village mosque into a Bohemian café which, together with the colony as a whole, became famous for its “carnivalesque” Purim parties (p. 33).
The remaining chapters treat the reincarnations of `Ayn Hawd, in the founding of New `Ayn Hawd and in a network of village-affiliated guest houses and businesses within and without the state of Israel (chapters 3 and 4); the themes of place and memory in Palestinian poetry (chapter 5); and the symbolic domesticity of woman, her connection to home and homeland, and her historic participation in house building (chapter 6). Throughout the work Slyomovics is refreshingly candid about her point(s) of view, not necessarily by declaring her sympathies, but rather by discreetly positioning herself (as outsider, insider, and guest) toward each of her subjects.
Object of Memory won the 1999 Albert Hourani Prize as well as the 1999 Chicago Folklore Prize. It also garnered an honorable mention from the Society for the Study of Narrative Literature’s Perkins Prize. These awards attest to the seminal importance of Slyomovics’ book for diverse academic audiences.

--------------
Marlé Hammond is a doctoral candidate in Arabic literature at Columbia University.