Kanaaneh: Birthing the Nation: Strategies of Palestinian Women in Israel 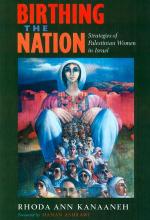 In this beautifully written ethnography, Rhoda Kanaaneh provides an insightful analysis of the politics of reproduction in the Galilee. Based mainly on fieldwork in her hometown, the author provides fascinating discussions of babies, boundaries, bodies, contraception, gender, and politics. Drawing on strong connections--family, relatives, neighbors, teachers, and friends --she provides us with an intimate view of how men and women view and negotiate their preferences for the ideal family size, happy childhood, safe and controlled sex, and beautiful bodies.
Reproductive discourses and practices, Kanaaneh argues, are shaped by “state policy, economic development, medicalization, and local dynamics” (p. 165). She starts her book by addressing the relationship between reproduction, politics, and nationalism. We read about the anxieties of Israeli politicians (from David Ben-Gurion to Yitzhak Rabin) over the national and religious identity of Israel. Since Israel’s founding, the desire to keep it a Jewish state has led to such policies as budget allocations, health insurance, and medical services that attempt to encourage Jewish Israelis to reproduce while discouraging Palestinian Israelis from having children. To counter these policies and their general economic and political marginalization, many Palestinians view having babies as part of their national duty and resistance to Israeli hegemony. In this context, reproduction becomes a political project that is linked closely to gender and nationalism.
However, Israeli family planning, which emphasizes small family size, increasingly is appealing to Palestinians, who have a strong desire for modernity and a middle-class lifestyle. Thus, while many Palestinians in the Galilee “resist Israeli domination,” they “also express awe for Israel’s technological superiority” (p. 81). Family planning here becomes part of a large project of “modernization,” and reproduction becomes closely linked to modern ideals and dreams. “Reproductive measures” (p. 105) are used more and more as key markers in classifying various social groups and showing their location in the social hierarchy. The opposition between the small family (positive and controlled reproduction) and the large family (negative and uncontrolled reproduction) is projected onto other oppositions, such as modern/primitive, Christian/Muslim, urban/rural, and foreign/local.
At the same time, having fewer children is shaped by consumerism. Many informants believed that they should secure all the consumer goods and products that their children desire. Several mothers and fathers see the ability to provide for one’s children as central to good parenting, happy childhood, and healthy family life. In addition, the increasing medicalization of reproduction plays a central role in the Galilee. Medical assistance not only is allowing people to control reproduction (through contraception), have babies (reproductive technologies), and acquire the ideal body (through plastic surgery), but also it is allowing them to draw on science and medicalization to help in gender selection and securing a male heir.
Despite its many virtues, the book could have benefited from further discussions of some key issues. For example, the absence of an explicit discussion of class is noticeable in this book, especially in chapter 3. Distinctions based on education, clan, religion, and urban/rural differences imply a class dimension that the author has not analyzed. Furthermore, there are two important concepts that remain rather underconceptualized in this study. The first is modernization, which the author often equates with modernity, “development theory,” and Westernization (see, for example, pp. 22 and 78). How are these concepts linked and different? And how is modernization related to globalization, another notion the author uses? The second concept is resistance, which, the author repeatedly argues, “mimics power” (p. 18). Yet, this assertion is not developed conceptually in the book. While it is clear that most of Kanaaneh’s informants internalize modern discourses on reproduction and bodily forms, it is less clear how they contest and “resist” them. When does an act or a discourse become resistance? When does a discourse become a counterdiscourse (see, for example, pp. 135 and 152)? These issues are not sufficiently addressed in the book, and resistance seems to be everywhere and nowhere at the same time. Still, this book is an engaging ethnography and a valuable addition to Middle Eastern anthropology in general and Palestinian studies in particular. I highly recommend it for students and scholars of gender, medical anthropology, and Middle Eastern studies.

-----------------
Farha Ghannam is assistant professor of anthropology at Swarthmore college, Pennsylvania, and author of Remaking the Modern: Space, Relocation, and the politics of Identity in a Global Cairo (University of California Press, 2002).