Khashan: Arabs at the Crossroads 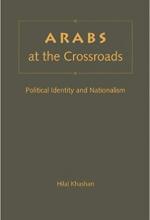 Hilal Khashan most likely wanted to write an imitation of Fouad Ajami's The Arab Predicament. He has failed (in style and substance) but nevertheless succeeded in writing a perhaps unintended and (il)logical sequel to Raphael Patai's The Arab Mind. His interest lies in investigating the "intellectual backwardness" and "moral degeneration" of the Arab mind (p. 1) or the Arab-Islamic mind (p. 2). In this bizarre work, which will strain the patience of even the most tolerant reader, the worst aspects of clichéd Orientalism are revived unabashedly. There is little research in this book, unless one counts the references to a variety of Western writers (Khashan seems to prefer 1950s writers like John Badeau, Harvey Hall, Manfred Halpern, and Charles Issawi) as research. Khashan frequently treats the reader to the insights of Iraqi Ba`thist functionary Sa`dun Hammadi--hardly a credible source--on the subject of political development (see, for example, p. 83). The author seems to harbor sympathy for the regime of Saddam Hussein, especially in his account of the Iran-Iraq war (which he blames totally on Iran, pp. 94-95) and the invasion of Kuwait (which he blames on Kuwait; pp. 98-101).
Like the Ajami book cited above, this work deals with all sorts of issues and subjects related to the Arab world. Instead of Ajami's original analysis, however, Khashan offers sweeping generalizations and assertions, as well as crude preachments. He most certainly lacks the eloquence of Ajami, as evident in such sentences as: "The malfunctioning Arab train has come to a halt, but the damage, extensive as it might be, is repairable. Unrepaired trains end up in junkyards." This cumbersome style of writing follows the reader throughout: instead of argumentation and causal analysis, there are assertions and declarations. For example, he states that Syrian students lack "social responsibility and coordinated thinking," citing as proof the remarks of a certain Alfred Carleton (pp. 23-24); that "Arab weaknesses are essentially the result of their own evolutionary processes, mostly unrelated to Western influence" (p. 63, citing an assertion by Issawi as evidence); that the glory and greatness of the Arab Islamic civilization is false and imaginary (p. 128, citing a statement to that effect from a certain Hudaytha Murad); that the Saudis are lazy (p. 78, citing the judgment of a certain Donald Wells); that "very few Arabs deal with reality in an objective and rational manner" (p. 133, citing an assertion by a certain Sa`id Hija); and that all Muslims are committed to the perpetration of Jihad (which he defines simply as "holy war"), but the militants are merely "better equipped" at carrying it out (p. 113).
The book is full of harsh judgments and preachy declarations, which basically urge that Arabs submit to Western hegemony and follow the 1950s recipe of modernization: "accept the new rules of the game as set by the West and integrate them in their behavior" (p. 143). If Arabs contemplate rejecting Western dictates, he reminds them of the "catastrophic consequences" (p. 143). His recipes, however, are based on his evaluation of the Arab mind, which he views as debilitated (p. 134), and on his contempt for and condescension toward not only Arab leaders (certainly understandable) but also the Arab masses (p. 135), whose incompetence and irresponsibility make them incapable of dealing with "rationality and complex analysis" (p. 133). In fact, he states that "part of the problem with Arab elites is attributable to moribund Arab masses" (p. 148). The author must be grateful that he is not afflicted with the same disorders that, according to his own analysis, seem to afflict all other Arabs. In contrast, he only has admiration for the West, not the real West, of course, but an imaginary ideal West, where secularism and "progressive rationality" (p. 140) rule supreme.
While one may criticize the author for this problematic book, one cannot accuse him of failing to offer solutions. Indeed, he is very specific in this regard, urging Arabs to value "hard work, punctuality, individuality, anonymous citizenship, respect for state authority, informational inquisitiveness, commitment to basic human rights, and acceptance of the idea of broadly shared political responsibility" (pp. 140-41). However, secularism is to be avoided because "tolerance, perseverance, commitment to public goals, and recognition of inalienable human rights all can occur without secularism per se" (p. 148).
In conclusion, I cannot find anything favorable to say about this book, which is insulting to millions of Arabs and to all those who believe in human equality. Not all is well in the Arab world, of course, but to hold an entire people responsible (in their genetic and mental makeup) for the misguided and evil policies of political leaders and external powers is outright prejudice.

------------------
As`ad AbuKhalil is associate professor of political science at California State University, Stanislaus, and research fellow at the Center for Middle Eastern Studies at the University of California, Berkeley.