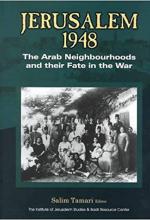 Prior to 1993, the academic literature on contemporary Jerusalem was more noted by its absence than its presence. Since the Oslo accords, however, there has been a wealth of useful publications. The indeterminacy of Jerusalem's future has provided a great catalyst for scholarly and political enquiry. Despite all this activity, there has remained a huge and disturbing gap: the absence of a serious and well-researched publication on the Palestinian Arab presence in those parts of Jerusalem that became Israeli after 1948. The lack of attention given to the life and society of the developing Arab suburbs in the west not only has affirmed by default the Israeli narrative of the Jewish-only origins for modern Jerusalem, but it has also failed to reflect the significant contribution that the Arab inhabitants gave to the politics, administration, and culture of the city and to Palestine as a whole. Jerusalem 1948 has filled that gap in a most rewarding and most useful way.
The book is an impressive example of how a collaborative research venture encompassing several foci can be brought together usefully. The book is the summation of a number of individual but coordinated endeavors that began with a joint workshop between the Institute of Jerusalem Studies and the BADIL Resource Center. It includes detailed historical research, a collection of excellent photographs, essential but hitherto not easily accessible maps (particularly the two reproductions of the Hadawi map), short memoirs and eyewitness accounts, and, finally, a set of priceless tables setting out the property losses for Palestinian Arab families.
Two introductory chapters by Rochelle Davis set out the evolution of the Arab communities in the western part of the city. "Ottoman Jerusalem" reveals how Zionist writers have emphasized Jewish construction projects beyond the walls of the Old City, leaving the impression that there was little Arab building. Davis argues this cannot be the final verdict because memoirs and contemporary reports indicate a significant Palestinian presence outside the walls. Her chapter on the growth of the western communities is a detailed portrayal of the richness of the intellectual and cultural life of the new suburbs and how their inaccessibility represented a huge loss for Palestinian society and greatly affected East Jerusalem between 1948 and 1967.
The two following chapters focus on the fighting between 1947 and 1950 and the resulting displacement of population. In "The City and Its Rural Hinterland," Salim Tamari presents useful data from both the UNRWA files and the detailed work of Salman Abu Sitta. This chapter and the one by Nathan Krystall, "The Fall of the New City, 1947-50", which makes extensive use of Zionist writings and draws together much of the new Israeli "revisionist" research, add significantly to the debunking of Zionist myths concerning the Palestinian refugee problem while simultaneously retaining the focus on Jerusalem.
The final three chapters are much more difficult for the general reader but are vital contributions not only in filling the gap in research but also in advancing the current debate over the city's future. In "Assessing Palestinian Property in West Jerusalem," Dalia Habash and Terry Rempel bring together much of the available documentation by different agencies, showing the difficulties involved in making realistic claims for collective compensation and acquainting readers with the precedents and the international legal context. Rempel’s chapter, "Dispossession and Restitution in 1948 Jerusalem," is a painstakingly detailed examination of Israeli policies toward Palestinian property in Jerusalem after 1948. This chapter links its historical research with the current political impasse over Jerusalem and the refugee issue by drawing parallels with restitution processes in other parts of the world. The final chapter, "Documenting Arab Property in West Jerusalem," has one section by Ahmad Jadallah and Khalil Tufakji that outlines the survey work carried out by the Arab Studies Society on this subject; its second section, by Salman Abu Sitta, comprises a brief but persuasive argument that the task of documenting property losses, in order to make a case for compensation or restitution, is possible.
The striking and very welcome aspect of all this research is the rigor of the scholarship. The book is thoroughly referenced, and the contributors discuss and evaluate different arguments in a restrained tone. Editor Tamari sought to employ a consistent terminology and set of geographic definitions, and, despite the difficulties in this respect, by and large he has been successful. One small improvement would have been to integrate the final chapter into the appendices and then add an overarching conclusion that brings together the main points of the different contributions and links them to the permanent status negotiations over Jerusalem and refugees. As is, the book ends rather unemphatically when the subject matter deserves a much stronger summing-up. Nevertheless, the publication is a credit to the sponsoring organizations and to the contributors, serving as a benchmark for Palestinian studies in terms of the quality of its research, presentation, and accessibility.

-----------------
Michael Dumper, senior lecturer in Middle East politics at the University of Exeter, UK, is author of Islam and Israel and The Politics of Jerusalem since 1967.