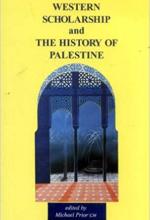 Very much in the vein of Beshara Doumani's article, "Rediscovering Ottoman Palestine: Writing Palestinians into History" (JPS 82, pp. 5-28), this collection of articles aims to reintroduce the Palestinians, indeed Palestinehood, into the history of Palestine. As a whole, articles provide a satisfactory explanation for the absence of the Palestinians until now from Western historiography of the land and generally blame biblical scholarship for this state of affairs.
The opening article of this book, by Keith Whitelam, shows how in the age of colonialism and imperialism, the European scholarly preoccupation with biblical Israel left Arab and Muslim history outside the realm of professional historical writing, and, at the same time, paved the way for the imposition, by word and sword, of the Zionist narrative on the land. Thus, a Eurocentric, as well as a Christian-centric, narrative served well the Zionist one. This is exemplified best in one of the principal Zionist claims: a nation returning not only to a homeland but also to a space that in the past had been occupied by a Jewish nation-state. This myth can be found in nineteenth-century theological discussions on biblical Israel, where the kingdom of David was reinvented as a Jewish nation-state, a reinvention later adopted gladly by the Zionist movement.
This collection is a deconstructive project in nature and as such is far more convincing in telling us how ideology was imposed on the past by modern political movements such as Zionism but less convincing in unearthing what really had happened. One therefore can only agree with Thomas Thompson, the second contributor to the collection, that from a biblical point of view (i.e., a theological point of view), any secular (i.e., national) attempt to reclaim the past, or nationalize it, for the present, is false. Is there a genuine story to be told when such a distant past is considered? Religion deals with beliefs and not scientific truth and thus can feel more comfortable with the lack of scientific proof for its conviction. In the age of nationalism, the Zionist movement will continue with great zeal, and the Palestinian national movement to a much lesser extent, to nationalize the past; the people of the past are too dead to resist this act of nationalization, which is why it is so successful.
There has been so far a difference between the two movements' act of nationalization. The Zionist adoption of the biblical narrative is a nationalization of the land, not of its people. In fact the people of Palestine had been excluded from the Zionist narrative of the land already in 1882, long before they were uprooted forcefully from it in 1948. The Palestinians, on the other hand, nationalized everyone in the land until the expulsion in 1948. In other words, the imposition of the biblical narrative produced real victims--the Palestinian people who did not fit the definition of the people of Israel according to the Zionist/biblical narrative. The Palestinian narrative, although debating until recently what date in history immigrants to the country are to be considered legitimate inhabitants, until that very date--be it 1917, 1948, etc.--accepts all the people of Palestine as belonging to the land.
Here lies the strength of this book in showing, not for the first time but in a very lucid manner clean of postmodernist jargon, the power of a historical narrative in producing human misery. Its novelty is in pointing to the specific contribution of the biblical narrative to that tragedy. It began with the theological construction of the "nation of Israel" myth. This term was presented by biblical scholars in the last century as a historical fact--indeed, as the only suitable term for defining the people living in Palestine from the early Bronze Age onward, even though it seems that the scattered villages of that Palestine had very little in common.
The reinvention of the Jewish people as an ancient nation of Israel was an important product of that scholarly effort. It played an important role in shaping the founding myth of Zionism: a people without a land returning to a land without a people. Excluding the Palestinians from the land was one thing, claiming that the land had its original nation, wandering about, was another. The two are interconnected. A genuine nation returned home, an undefined group of people had to move, and later move out, to make place for this act of historical justice. As Thomas Thompson shows in his article, the myth of a wandering nation hardly ever was challenged in a scholarly way. He claims that after the great Jewish rebellion against the Romans in 70 A.D. most people stayed. Not only that, in due course they were Christianized more or less at the time the empire as a whole was "baptized" and in turn with the advent of Arab conquers were partly Islamized. This was the indigenous population of Palestine, at times mostly Jewish, later mostly Christian, and finally predominantly Muslim--a population undergoing processes of conversion, over a period of 2,000 years, similar to most people in the area, a historical chapter ending with the redefinition of these communities as national movements.
The editor's own contribution touches on the rawest nerve in this whole story. Blaming Zionism for adopting a biblical narrative to support its contemporary aims is one thing; to condemn it for remaining loyal to the ethics guiding the biblical treatment of lands and people is another. Prior's examination is ethical and shows how the Bible "can be a charter for dispossession, not only for liberation" (p. 53). This is, of course, true about all the holy scriptures and the elastic interpretation that can be given to them to serve contemporary political aims. One wonders how this particular lethal reading of the Bible was relevant for the colonialist drive of early Zionism, with its secular zeal and vision. I have no doubt that this is the principal reading of the biblical text among many Jews in Israel, not all of them are necessarily extremists or fundamentalists.