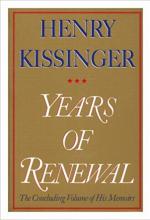 In this third volume of his memoirs, covering the final years of his term as secretary of state (from President Richard Nixon's 1974 resignation to the electoral defeat of President Gerald Ford in 1976), Henry Kissinger recounts an occasion in 1994 when he found himself sitting next to Yasir Arafat at an awards banquet for Arafat. He reminisced with the Palestinian leader about a period twenty years earlier when the so-called Jordanian option broke down. This negotiating option would have arranged for an interim agreement to return parts of the West Bank to Jordanian control. Although Arafat and Kissinger agreed that the territorial arrangement Arafat signed in 1993 as part of the Oslo accords was little different from Kissinger's Jordanian option, they disagreed over who ultimately would have controlled the territory if the 1974 plan had gone forward. Kissinger reminded Arafat that his specific intent, far from turning territory over to PLO control, had been to exclude the PLO from the West Bank. Arafat responded that it would not have mattered; Jordan's King Hussein would not have been able to hold on to the territory, and the PLO would have been established there long since.
Some sad ironies stand out in this episode. One is that Kissinger was even given a seat of prominence at a ceremony honoring Arafat for Oslo when Kissinger's efforts were targeted so pointedly at preventing the kind of agreement reached at Oslo. Another is that, twenty years on, Kissinger still cannot accept Arafat's insight and does not recognize that what was achieved in 1993 might have been achieved in 1974, and much bloodshed prevented, had he not worked against the Palestinians.
Using an odd logic, Kissinger blames the Arabs for "guarantee[ing] a nineteen-year impasse on West Bank negotiations" (p. 383) but places no responsibility at all on Israel or the United States. Even though he makes it clear that Israel opposed the Jordanian option, even without PLO involvement, and categorically refused to negotiate with the PLO, he blames the Arabs, who issued the 1974 Rabat summit decision declaring the PLO the "sole legitimate representative" of the Palestinian people, for the two-decade long failure to achieve a West Bank agreement. He fails to mention at all, in the context of impediments to progress, that in 1975 the United States formally pledged not to negotiate with the PLO unless it recognized Israel's "right" to exist. In other words, by Kissinger's logic, Israel's and Washington's refusal to deal with the Palestinian issue was ultimately all the Arabs' fault.
Two themes are evident in the Middle East sections of this memoir: Kissinger's unabashed sympathy for Israel and the Israeli perspective (he repeatedly refers to Israel's "haunting nightmares" [p. 424], laments that it had "no respite from wrenching decisions" in "seemingly endless negotiations" [p. 1031], and excuses Israeli intransigence as "heroic and heartrending" [p. 399]), and his tendency to take credit for all subsequent progress in the peace process (he labels the second Egyptian-Israeli accord in September 1975 the "decisive step" on the path leading to Oslo [p. 347]).
Given his obviously Israel-centered perspective, Kissinger's persistence for a generation in misplacing responsibility for the failure to resolve the Palestinian problem probably should not be surprising. Although he does refer to this issue as the origin of the conflict and claims that he intended to move toward including Palestinians in the peace process if Ford had won in 1976, it is clear that he never believed, and still does not, that the Palestinians were truly the core issue. He makes no reference at all to the November 1975 congressional testimony of Harold Saunders, then deputy assistant secretary of state, to the effect that the Palestinian problem was the "heart of the conflict." This testimony was a trial balloon that Kissinger himself authorized, but when it aroused strong objections from Israeli supporters, he disavowed it.
Kissinger repeatedly indicates, moreover, that he believed that including the Palestinians would complicate matters. Against the judgment of most of his Middle East ambassadors, he concluded that engaging the PLO in the peace process would radicalize the process because the Palestinians, he shuddered, would "raise all the issues the Israelis can't handle" (p. 1053). This memoir, more than many similar self-serving political reminiscences, is a testament to political myopia and the persistence of a mind-set even in the face of evidence that contradicts it.