Sabbagh: Palestinian Women of Gaza and the West Bank 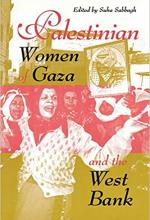 This book is the second collection of articles on and interviews with Palestinian women in the West Bank and Gaza Strip edited by Suha Sabbagh, the former director of the Institute for Arab Women's Studies in Washington, DC. The first collection, Arab Women: Between Defiance and Restraint (New York: Olive Branch Press, 1996), brought together articles by local and international scholars, as well as interviews with activists, that reflected the varied (but predominantly positive) experiences of women in the early stages of the intifada. This second collection brings together works that reflect the more revisionist thinking about the effects of the intifada on gender roles, with a greater temporal focus on the latter years of the uprising (especially following the Gulf War).
The book is divided into four thematic parts. Part 1 functions as the historical backdrop (the rise of the women's movement in the occupied territories and women's changing experiences in the intifada) and simultaneously introduces many of the themes that are dealt with in more depth later in the volume. It includes contributions by Joost Hiltermann, Islah Jad, Philippa Strum, and Zahira Kamal. Jad's article stands out for bringing a different analytical frame to the material. Instead of focusing on women as individuals vis-‎à-vis the occupation, the national movement, and the intifada, her focus is on changes in family structure and how these were affected by various political forces and economic processes. She then assesses the way in which gender relations were shaped, challenged, and sometimes reconstituted by the different forms and roles that the family took at different periods. Jad concludes that the latter stages of the intifada ultimately set the stage for a restrengthening of family authority (both ideologically and functionally) that undermined many of the gains in the direction of greater personal autonomy that had been acquired by younger generations of males and females.
Part 2 focuses on the varied representations of Palestinian women in literature and folklore. It includes contributions by Sherif Kanaaneh on women in legends of the intifada, Ilham Abu Ghazaleh on gender in intifada poetry, two short stories by Hanan Ashrawi, and an interview with novelist Sahar Khalifeh. This part is perhaps the most original and interesting section of the collection. The high profile of the women's movement in Palestine has led to a tendency by writers on gender to focus strongly on the political and treat the cultural purely in terms of practices that are seen as obstacles to women's activism. The picture that emerges about gender ideologies from analyses of actual cultural discourses and artifacts is startling in contrast to the predominantly positive outlook offered by the sociologists of the women's movement. Both Abu Ghazaleh and Kanaaneh show how female agency and individualism are still barely conceivable in the symbols and devices of nationalist poets or in the language of popular culture. The two essays point to the importance of looking at such discursive forms in order to uncover the deeper structures and meanings in which national and gender identities are produced and maintained and how they correlate back to relationships in everyday life.
Part 3 covers some of the same ground as part 1 but uses interviews with activists and scholars, as well as first-person testimonials. It includes an original psychosocial perspective on the family and gender relations in the intifada through an interview with Eyad al-Sarraj, director of the Gaza Community Mental Health Project.
The final section of the book looks at the women's movement in the early post-Oslo period. Amal Kawar sketches some of the main organizational challenges and constraints that emerged at the outset of Oslo--especially the clash between the "historic" women's leadership of the PLO in exile and the array of unruly women's organizations and activists in the occupied territories. This theme is followed through in the closing essay by Suha Sabbagh, whose extremely deft textual analysis traces changes in the various versions of the Draft Declaration on Palestinian Women's Rights, starting with its inception by the General Union of Palestinian Women in Tunis to the version that was debated, changed, and finally ratified by all the various components of the women's movement "inside," in the West Bank and Gaza. By analyzing both the slight changes in nuance, as well as the more radical changes in language and focus that appear across three drafts of the text, Sabbagh uncovers not only the differing attitudes and structural stances of the local versus exiled women's leadership but also the often painful clash of two very different historical experiences of Palestinian women's activism. The fact that the final draft reads, in Sabbagh's own words, like a "tired text" is perhaps one of the more poetic assessments of the vagaries of the ongoing state formation process.
While much of the sociology of women's activism has been covered in other collections and many of the articles in this book have appeared in other forms elsewhere, Sabbagh has made two important contributions. First, she has made available to the English reader works by local authors that previously had been available only in Arabic. Second, through the various interviews with local writers, scholars, and activists, she has brought their perspectives for the first time to a wider international audience. A main criticism is that the title is misleading. By semantically putting women in Gaza first, the author might have made a nice point about the regional politics of Palestinian nationalism, but it leads readers to wrongly assume that women in Gaza are going to get either precedence or at least a higher profile in the book than they actually do.

-----------------------
Rema Hammami is an assistant professor of anthropology at Birzeit University and a faculty member of Birzeit's Women's Studies Program.