Aruri: The Obstruction of Peace : The United States, Israel, and the Palestinians 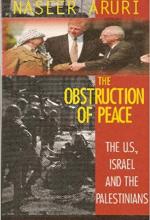 One of the most troubling aspects of the 1993 Oslo agreement and its 1994 implementing agreement has been that these accords promoted the widespread illusion, at least until Benjamin Netanyahu's election in Israel, that all was going well for the Palestinians and that peace was virtually an accomplished fact. The Palestinians had obtained most of what they wanted in the way of recognition from Israel and the promise of autonomy, it was believed; only some of the details and a few Israeli troop redeployments remained to be worked out. Few in the United States seemed to notice that, even years after Oslo, the Palestinians still lacked basic political freedoms, still lived under Israeli domination in small isolated enclaves, still endured the worst aspects of Israel's occupation practices, and suffered increasingly severe economic deprivation and hardship.
Naseer Aruri's book, written even before the Likud's return to power in Israel, puts the lie to the optimistic interpretation of Oslo with a fine analysis of its shortcomings. Immediately after news of the Oslo negotiations broke in August 1993, Aruri notes, media pundits and Middle East experts "overwhelm[ed] a stunned audience with an endless variety of explanations for the miraculous event," hailing it as the start of "a new chapter that would convert a perpetual conflict to a new peaceful co-existence" (pp. 191-92). However, few of the pundits looked closely enough to notice that Oslo's Declaration of Principles was flawed from the beginning by its "conspicuous shortage of principles." In actuality, Aruri points out, the declaration was merely "an agreement to reach agreement" (p. 209), containing no mention of the occupation, national rights for the Palestinians, or principles such as the exchange of land for peace that are embodied in UN Resolution 242 and had guided the peace process for the previous quarter century. As Aruri observes, most negotiated agreements have an outcome in view and call for its implementation in stages, but Oslo was merely an agreement to negotiate in stages. All fundamental issues--borders, Palestinian refugees, Jerusalem, even the occupation itself--were deferred. In fact, whereas Palestinians regarded Oslo's self-government arrangements as their link to independence, Israel has treated the agreement as merely "a mechanism to ratify the occupation under a new and different label" (p. 213).
Aruri is highly critical of Yasir Arafat and the PLO for naively letting themselves be hoodwinked into agreeing to Oslo without obtaining guarantees for the Palestinians and ultimately for giving away "the essence of the Palestinian position," along with the international legality that position had gained (pp. 218-19). Arafat too easily fell into Israel's negotiating trap, Aruri believes, leaving himself in the position of having to "prove" his ability to govern and provide security for Israel before Israel is required to implement any part of Oslo.
Unfortunately, despite Aruri's perceptive analysis of the Oslo process, the bulk of the book is difficult to get through. Its writing and organization leave much to be desired. For instance, separate chapters, on such topics as U.S. strategy during the cold war, marginalization of the Palestinian issue, the role of electoral politics in the United States, and Congress's role in Middle East policy, all overlap and leave the reader reeling chronologically--from Nixon to Bush, then back to Carter and forward to Clinton, then back to Reagan, and so on.
Aruri's almost exclusive reliance on newspaper articles is also seriously limiting. The book would have benefited greatly by a more extensive use of available sources. This is particularly true of his treatment of the Carter years. Carter's own memoirs, as well as those of Cyrus Vance and Zbigniew Brzezinski, and especially William Quandt's superb study of the Camp David process, Camp David: Peacemaking and Politics, would have provided a more nuanced account of this administration's thinking and of the pressures it was under from domestic political forces. As it is, Carter emerges from Aruri's account as little different from Ronald Reagan.
Aruri's book is valuable for its analysis of the Oslo process, but only the persevering reader is likely to find this, buried as it is in the middle of an otherwise confusing presentation.

-----------------
Kathleen Christison is the author of Perceptions of Palestine: Their influence on U.S. Middle East Policy (University of California Press, 1999)