Arzt: Refugees into Citizens: Palestinians and the End of the Arab-Israeli Conflict 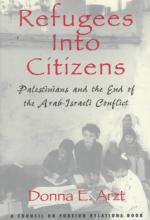 Published just after the Likud party came to power in the summer of 1996, this book is permeated with the initial euphoria generated by the first and second Oslo agreements. Its objective and central theme is to propose a comprehensive and operational plan for resolving the Palestine refugee problem--which the author views to be the core issue and the most volatile element of the Arab-Israeli conflict.
The author's main assumption is that it is in everyone's interest--Israel, the Arab states, and the Palestinians--to solve this thorny question in a magnanimous and fair (though probably not "just") manner. The elements of the solution constitute a package deal in which all parties are expected to make concessions. The suggested package is based on the principles of repatriation (basically to areas under Palestinian Authority [PA] control), integration of the refugees (in the current host countries), and resettlement (in third countries like Iraq and Scandinavia). While the Palestinians are expected to concede that their repatriation to Palestine will be partial and symbolic, the Israelis will have to yield their opposition to the right of return. However, this symmetry is more apparent than real.
To some extent the author's perspective reflects current trends in Arab and Palestinian attitudes concerning the consequences of acquiring citizenship in the host countries. Until the early 1980s, Palestinians used to equate acquiring citizenship rights by refugees in the host countries (such as Syria, Lebanon, and Jordan) with resettlement--a perspective that resonated with the cynical denial of residency rights to Palestinians in virtually all Arab countries, except Jordan, under the guise of preserving their right of return to Palestine. With the war in Lebanon in 1982, and the subsequent expulsion of Palestinians from Kuwait and many Gulf states after the Gulf War in 1990-91, it became apparent that the continued disenfranchisement of Palestinians was neither a guarantor of their ultimate political rights nor a condition for their continued commitment to an ideology of liberation and return.
Most Palestinians today would agree that waiting for the ultimate resolution of refugee claims necessitates transitional agreements with the host countries--particularly in Lebanon, Syria, and the Gulf states--in order to protect their status as residents and employees of institutions in those countries. Arzt is aware of these debates, but her prognosis seems to go beyond them. Hers is not a program of safeguarding the rights of refugees but of resolving their status as refugees within the current political contingencies in the Middle East. This is what she proposes:

1.  Palestinian refugees would be granted dual citizenship by the PA and those

host Arab countries that would agree to enfranchise them.

Israel would absorb 75,000 refugees, as would Lebanon. A target

"absorption" quota is proposed for several countries depending on their

absorptive capacity and their attraction to refugees. In all cases, refugees

would become permanent full citizens (i.e., not residents) of the target

states. Most refugees would be expected to end up residing in Jordan, the

West Bank, and the Gaza Strip.

3. Resettled refugees would receive rehabilitation and funds to help them

"normalize" their lives. Host states would be compensated for absorbing

4. A compensation fund "in the range of tens of millions of U.S. dollars"

would be established (with heavy Saudi and Kuwaiti participation) to cover

the cost of final claims for lost property. The collective nature of the fund

would allow Israel to participate in refugee compensation without an

admission of guilt for their status (the author seems keen on this point).

Israeli money would be raised, in part, from rents collected from Jews

Several components of Arzt's proposal are daring and original. For example, she suggests that Israel should be the first to repatriate Palestinian refugees, because that would set a precedent for Arab states to resettle "their refugees." In her words, "only when the Arab states see that Israel at least partially recognizes Palestinian claims for return . . . will they themselves be willing to grant citizenship and to permanently absorb their own target number of refugees" (p. 92). In another context, she proposes that refugees returning to the West Bank or Gaza be housed in Jewish settlements vacated by settlers who might relocate to Israeli territories (p. 98).
At the heart of Arzt's thesis is the search for a state of "normalcy" in which Israel would not be threatened by revanchism or "demographic encirclement," and the Palestinians would not be threatened by a constant state of transient existence, in which inter-Arab conflict or economic recession would make them scapegoats targeted for relocation or expulsion.
There are several pitfalls in Arzt's vision. First, she hardly alludes to the fact that most Palestinian refugees still seek to go back to their country of origin, which in most cases is only few miles away from their current camps, rather than to be integrated into their countries of asylum. I wonder if the writer would have adopted the same language in dealing with her subject had she been writing on, say, Bosnia or Kurdistan. Second, she has a legalistic, Anglo-American obsession with citizenship as a remedy for refugee status. While this may work for many refugee-immigrants who seek residency in Europe and North America today, it is hardly applicable to most of the Middle East (and most third world countries) where ethnic and regional discrimination overrides constitutional rights accorded to citizenship--especially in countries like Lebanon and Iraq where the balance of power is still largely delineated, and contested, by confessional boundaries. Citizenship may entail certain constitutional rights that are often undermined by an arbitrariness of official, and often extralegal, practices. Furthermore, the mere granting of Palestinian nationality to refugees in Arab host countries, without legal safeguards for protecting their residency rights in their host country, might give an impetus for impatient governments to actually pressure refugees to leave the host country. Third, despite her liberal and often critical language, the author adopts an essentially Zionist agenda (I can't think of a more polite way of putting it) for solving the Palestine refugee problem--one that is based primarily on resettlement and compensation. The fact that her proposal allows for symbolic repatriation of Palestinians to Israel does not change this judgement in my view--it merely ameliorates it. In the final analysis Israel escapes facing its historic responsibility for creating the refugee problem scot-free, and even the compensation fund that is proposed here is diffused in a global settlement in which Israel is largely a voluntary contributor.
A major problem with this kind of analysis is that the reasonable aspects of it are unlikely to be reciprocated. The current government of Israel, and most probably even a future centrist Labor government led by Ehud Barak, is unlikely to accept the two main cornerstone's of Israel's part of the bargain: unrestricted residency rights in the PA areas and repatriation of a considerable number of Palestinian refugees to Israel under a family reunification scheme.
From the point of view of the Palestinians, the book goes beyond the existing Western-Israeli liberal consensus concerning the future of refugees--and for this the author should be commended for her forthrightness. It also challenges many Arab official attitudes toward the legal status of refugees in the host countries (for example, the suggestion of introducing dual Palestinian-Arab citizenship is currently opposed by the charter of the Arab League for no good reason). However the seeming parity of the solution is no parity at all. Most Palestinians feel that they have already made the ultimate sacrifice by accepting a lopsided territorial compromise with Israel which concedes to the latter sovereignty over four-fifths of the country. To be asked to make another concession by forsaking the right of return, as well as accepting a qualified citizenship in the remaining part of Palestine, without appropriate safeguards for their historical claims, might be politically expedient but is morally reprehensible and (for much of the diaspora) outright unacceptable.

-------------------------
Salim Tamari is associate professor of sociology at Birzeit University and the director of IPS's Jerusalem affiliate, the Institute for Jerusalem Studies. He served on delegations to the multilateral and quadripartite negotiations on Palestinian refugees.