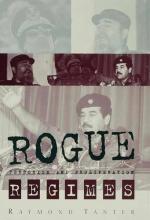 University of Michigan political science professor Raymond Tanter's objective in this book is to explore the most effective ways for the United States to deal with what he calls "rogue regimes," defined as those governments that engage in international terrorism and/or try to acquire weapons of mass destruction. He considers six such countries to be international "outlaws"--Cuba, Iran, Iraq, Libya, North Korea, and Syria--and devotes one chapter of the book to each one. His choice of states is not unique, as these same countries have been singled out by various self-described terrorism experts for being threats to U.S. interests since the early 1980s. However, he justifies his selection by claiming that the six nations qualify as rogue regimes because they (as well as Sudan) are listed in the U.S. Department of State's annual terrorism report as having "repeatedly provided state support for international terrorism--premeditated, politically motivated violence perpetrated against noncombatant targets by subnational groups, usually intended to influence an audience" (p. 40). In other words (albeit not so stated by the author), rogue regimes are those governments perceived as challenging U.S. policies and/or interests.
Tanter acknowledges that not all other countries, including some allied with Washington, agree with the American definition of rogue regimes. Even when there is broad consensus, as in the case of Iraq since 1990, the U.S. "threat perception" of a particular government may differ substantially from that of its allies. For this reason the United States cannot always count on international cooperation with respect to economic sanctions and other policies designed to contain "pariah" countries. Therefore, he recommends that U.S. strategies for dealing with them be flexible, ranging from full containment--"retribution" for bad behavior--to varying degrees of accommodation that reward evidence of good behavior.
Tanter presents what best can be described as a conventional, U.S. policy community account of the so-called rogue regimes: He cites mostly secondary sources that support his own views and demonstrates a total lack of understanding about the internal politics or motivations for external policies of the countries he labels as international outlaws. While this book has no insight to offer about the governments it purports to study, it does provide interesting personal accounts of U.S. bureaucratic and political thinking about the six "bad" countries during the early 1980s. For example, as a member of the Republican National Committee's National Security Advisory Council in 1979-80, Tanter participated in the strategy sessions that helped to formulate foreign policy for Ronald Reagan's presidential election campaign (pp. 49-58 and 101-3). During the subsequent Reagan administration, he served as a senior policy adviser on the National Security Council and later in the Department of Defense. His descriptions of debates over policy toward Iraq (pp. 104-109), Libya (pp. 135-52), and the Israeli annexation of the Golan Heights in 1981 (pp. 176-82) provide useful primary source material about attitudes within the national security bureaucracy.
Tanter does not conceal his pro-Israeli bias in terms of U.S. foreign policy in the Middle East. In fact, he credits his involvement with the Reagan administration to the American-Israel Public Affairs Committee's Kenneth Wollack, who recommended him to Richard Allen, Reagan's first national security adviser (p. 49). This orientation may explain the author's selective definition of international terrorism as violent acts carried out by subnational groups, a definition that pointedly excludes actions by states that terrorize civilian populations. Thus, Israeli attacks on Palestinian refugee camps and Lebanese villages in Lebanon, which resulted in the deaths of thousands of innocent civilians between 1968 and 1996, are not seen as terrorism. Yet, this inability of writers like Tanter to evaluate objectively the claims of both sides in a conflict leads to the mind-set that demonizes one side as a rogue, terrorist, or outlaw. At a policy level, the failure to grasp the sources of outrage that motivate subnational groups to attack states directly or indirectly (by targeting civilians) prevents genuine efforts to deal with the very grievances that perpetuate violence.