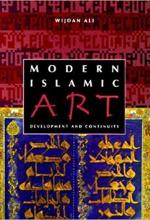 Books on modern art or artists from the Islamic world are very rare. Thus, one always looks forward to a new publication. I admire Wijdan Ali's energy as an art historian, painter, and Jordanian diplomat. However, I am apprehensive about her artistic statements and feel her contribution to the knowledge of certain aspects of the contemporary art scene in parts of the Muslim world can perpetuate negative perceptions that some have regarding artists from the Middle East or North Africa. For example, the title of the book is problematic. Although the author, who defines herself as a "contemporary Islamic artist," acknowledges the ambiguous connotations of the terms modern and Islamic, she nevertheless succumbs to their associated pitfalls. Her criteria for choosing some artists and artworks seem flimsy and haphazard.
Can religion, rather than culture or the quality of the work, be a criteria of choice? Must an artist be a practicing Muslim before being labelled "Islamic"? What about non-Muslim artists who belong culturally to the Islamic world? Can an art historian ignore the contribution of other religious communities, such as Christians, Baha'is, Jews, Zoroastrians, or atheists, to the visual arts of the Islamic cultural sphere? Are all painters artists? The book suffers from such omissions, while Ali's annoying labelling of painters as "modern Islamic artists" betrays a restrictive and dubious approach. One also finds it difficult to relate the term "modern" or "art" to most of the images reproduced. To a critical eye, they seem to be mostly minor works by haphazardly selected painters.
The book focuses largely on the historical background of contemporary modern art in Algeria, Egypt, Iran, Iraq, Jordan, Lebanon, Morocco, Palestine, Sudan, Syria, Tunisia, and the Arabian Peninsula. Each chapter contains a short critical account of artists who, according to the author, have been instrumental in the development of their country's art movement. The historical background is informative up to the 1970s, but virtually overlooks the past two decades. Among many important developments ignored are the contributions of some financial institutions in Morocco through publications and collections. In the chapter entitled "Palestinian Artists Living Abroad," fails to mention several artists, including Mona Hatoum, whose work has been exhibited widely in major European and American museums. The facts on Iran are dated, for although the conditions for artists to exhibit since the Iranian revolution are very restrictive, many private galleries continue to show works to critics, collectors, and art lovers.
In the second part of her book, "Origins and Overview," Ali analyses the different stages that some artists have undergone, then elaborates on the artistic identity crisis experienced by some. She concludes that the continuity of Islamic art is represented best today in the contemporary "Calligraphic School of Art," to which she devotes no less than thirty-four pages. Although she contends that Iraqi artist Madiha Omar should be considered the pioneer in the "calligraphical school" (pp. 152, 158), the only illustration of her work is far from showing any originality or calligraphical contribution. Two of the sixteen color pages are devoted to Issam el-Said, an artist who died before finalizing his contribution to a calligraphical approach. In contrast, there is only one black and white illustration by Koraichi, a leading Algerian artist. Mahdaoui, a choreographer of letters, who inspired a whole trend of calligraphists, is dismissed in one paragraph as an artist with no followers (p. 70).
The biographies of these subjectively selected artists in the "Appendix" are also visually difficult to read. The names are not highlighted; many minor artists are given the same importance as key figures, while internationally acknowledged artists are missing including, Maliheh Afnan, Ghada Amer, Bellamine, Zaha Hadid, Fathy Hassan, Hatoum, Adam Henein, Shirazeh Houshiari, Kacimi, Mounira al-Kazi, Koraichi, Marwan, and Shirin Nishat. As for the bibliography, many monographs and exhibition catalogues, unique sources of information on artists, are not mentioned. Out of forty-nine entries, eleven are references to chapters in Ali's previously edited book, Contemporary Art from the Islamic World (Scorpion Publishing, 1989). All the visual materials in that book came from the Jordan National Gallery of Fine Arts, which was founded by the author. More than 80 percent of the artwork reproduced in the present book is also from the same collection. These details are important because they put into perspective the selection of the artists and the choice of illustrations. But the book fails to clarify how the collection was made--based on donations, personal taste, and tight budgets. As a result, the book is hardly representative of each artist's best work.
As a general literary overview of the art scene before the 1970s, the book is informative. However, the bibliographical negligence is clearly reflected in the author's approach to the subject, the selection of artists and illustrations, and the development of current concerns. New medias such as photography, installations, architectural drawings, and videos or digital computer images are entirely absent from Ali's contemporary Islamic art scene.