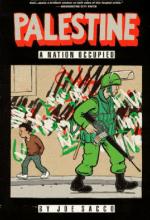 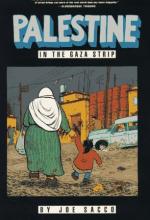 Documentary comics? The covers of Sacco's twin volumes--which I wish were one--are enough to furrow more than a few brows among those accustomed to "serious" reportage. Let doubts be short-lived, however. Historian William Stott, in Documentary Expression and Thirties America, observed that the American documentary tradition exists "to make real to us another person's experience," and in this regard, Sacco has penned a vivid and substantial pair of books.
Sacco is a pioneer among a tiny minority of realists working in a traditionally lowbrow, fiction-and-fantasy medium. A journalist at heart, his disjunctive and self-deconstructing style gives us experience, not just facts. This is good participant-observer journalism, laced with enough irony, attitude, and gonzo flair to make these comics excellent introductory texts for under-thirty readers. It might be all the more memorable in the classroom for its unconventionality. The Palestine couplet is the compilation of nine original comic books that Sacco produced following his first visit to the Occupied Territories and Israel over the winter of 1991+n92. He chronicled his experiences in refugee camp homes, hospitals, streets, and schools; in curfews and demonstrations; in interviews with former prisoners and torture victims; with men, women, and children; in homes and in numerous, expertly recorded chance encounters. He is systematic--he covers the important issues and puts them in historical context--yet his style preserves the spontaneity of the investigation. More importantly, his distorted, occasionally grotesque faces and fisheye-lens point of view convey the sheer madness of life under occupation: Sacco captures the soul of the experience with all its mud, sweat, ignoble fears, four-letter words, and lasting damages.
Sacco makes himself the book's antihero as he travels and converses. When he is handed a photo of two dead youths, he writes, "sure it's too heavy, even for a vulture like me, but I'll take it, 'cause faces are what it's all about, man. . . ." (A Nation Occupied, p. 71). Later he writes, "For two days, three, I wait. News of more curfews and the downpours keep me in Jerusalem. . . . Where is [Saburo], dammit? What's he seeing? All I've done is get three or four chicken-shit interviews. . . ." (Ibid., 77). All journalists have such thoughts now and then, but it's bad form to mention them outside the newsroom. Sacco wallows in it.
As a graphic artist, Sacco does not have the troubles that come from trying to use a camera. His mind is his camera--still, video, and sound all in one. He illustrates not only all he sees, but all he is told, and he does it superbly. Chapters in A Nation Occupied titled "Ansar III" and "Moderate Pressure" are accounts of prison life and torture, respectively, all the more powerful for imagery that no camera could capture. Sacco himself fades into the background, and he records, with great faithfulness and compassion, the stories he hears. In drawing "Moderate Pressure," he breaks each page into twenty squares, which allows him to draw the sequence as if the pictures were stills from a film. It is the most realistic account of imprisonment and torture I have read.
Although A Nation Occupied covers more ground, In the Gaza Strip is the more remarkable of the books. Sacco spent but a single week there, and yet produced a book that hits many of the most important aspects of daily life in that neo-Bantustan. He draws Gaza as he sees it, first from a car window, later from the streets and the offices, greenhouses and homes. His attitude mellows here. He is more sincere, as if the sheer intensity and fragility of life in the Strip overwhelmed him--as it does many visitors (myself included). He records a ten-year-old girl asking him with wide eyes, "Do you have soldiers and PFLP in your country?" (p. 85); at a dinner he meets a little boy named "Father of the curfew" because he was born at home during a long curfew.
The closing sequence of In the Gaza Strip, however, is most telling of what lies beneath Sacco's hip veneer. The scene takes place while Sacco is ruminating over his sojourn. He recalls watching from a doorway as three Israeli soldiers stopped a boy of eight or nine in the pouring rain. The soldiers took cover under an awning, but made the boy stand facing them, in the rain: "Perhaps for the boy it was one of dozens of humiliations, bad enough in his personal scheme of things, but no worse than others he'd experienced, I don't know. . . . The boy stood there and answered their questions, and what choice did he have? But what was he thinking? Was it, one day it will be a better world and these soldiers and I will greet each other as neighbors? Or was it simply, one day--ONE DAY! . . . and if I'd guessed before I got here, and found with little astonishment once I'd arrived, what can happen to someone who thinks he has all the power, what of this: What becomes of someone when he believes himself to have none?" The Palestine books deserve a place among the best of documentary.