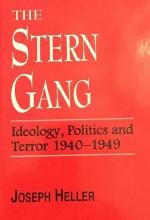 The Stern Gang is a historian's history. It is extremely thorough but within a very narrow context. It barely concedes that a reader might be unfamiliar with the framework of history and politics in which the title's small but influential band of terrorists operated. It is an admirable work of scholarship but meant for scholars, not for general readers.
The roots of the Stern Gang lay in the 1930s Zionist countermovement known as Revisionism. Led by Ze'ev Jabotinsky, Revisionism held that Jews could not wait around for British good will to grant them a state in Palestine but had to act themselves to take power. Jabotinsky, although attracted to the era's fascist ideology, was an admirer of the British and unwilling to confront them. His goal was to persuade London to authorize the organization of a Jewish army that would safeguard British interests in the Middle East against a resurgent Germany. Within the Revisionist movement, Avram Stern, although loath to challenge Jabotinsky, considered him naive.
For Stern, the British were an implacable enemy. He hated them so much, in fact, that he was prepared to make a deal with the Nazis--on the grounds that they were merely persecutors--to help in the overthrow of the British Mandate. A romantic and a mystic more than a political thinker, Stern actually believed the Nazis would consent to the establishment of a sovereign Jewish state in Palestine, and he continued his unrequited courtship of them--turning to the Italians when prospects with the Germans looked grim--even after the war began. The British finally had enough of him by the time General Rommel's German armies reached the gates of Cairo in 1942 and fatally shot him in his Tel Aviv hideout.
No doubt the mainstream Zionists, led by David Ben-Gurion, helped the British to track Stern down. Ben-Gurion vowed to pursue a diplomatic course as long as there was hope that the Jewish state could be created with Britain's concurrence. He also was willing to settle for the relatively modest goal of a homeland for the Jews, in contrast to Stern's disciples, who wanted a powerful state that would spill across the Jordan River, perhaps as far as the Euphrates and the Nile.
Heller, unfortunately, expounds too little on the differences between Ben-Gurion and extremist wings, expecting his readers to be grounded in Israeli history. In reminding readers of the mainstream's role in the death of Stern, however, he points to one of the seminal incidents of the profound antagonism that exists between the branches of Zionism to this day. Stern's martyrdom became an item of faith among the hard-liners. His memory was used to bring about a rebirth of Jewish terrorism as World War II came to an end and a weakened Britain turned to face a resurgent Zionist movement. Still convinced that Britain was the enemy, Stern's heirs held that the Arabs, like the Jews, were victims of imperialism. Now called Lehi, they amended the fantasy that had led them to the Nazis and began a flirtation with Stalin, persuaded that he, as Britain's principal foe, would help them set up an independent, albeit pro-Moscow, Jewish state. This course led them to the same dead end as had their earlier one.
Heller occasionally makes the point--without developing it sufficiently--that what gave birth to Revisionist extremism was a messianic urge based in the heroic episodes of the Jewish past. Stern and his followers were the Maccabees; the British were Rome; the mainstream Zionists were the Hellenists. The Stern Gang wanted nothing more than to recapitulate biblical triumphs--although in reality, most of the great heroes of the Jewish past ended their escapades in huge, bloody defeats.
For Revisionism's extremists, this romantic past somehow justified the inordinate shedding of blood that accompanies terrorism. The most celebrated of their killings were of Britain's Lord Moyne and Sweden's Count Bernadotte, the UN mediator. But not far behind--after reclassifying the Arabs as an enemy--was the massacre of several hundred Arabs at Dayr Yassin. These acts remain a shame upon the Jewish state.
Not surprisingly, the hatred that preceded the establishment of the Jewish state endured after the state was founded in 1948. Without Britain as an enemy, Lehi denounced mainstream Zionism as imperialism in another costume. Almost all Israelis recognized that the contention was laughable. After all, Ben-Gurion, the nemesis of the extremists, had delivered on his promises, creating a state that was not just sovereign but powerful enough to keep its enemies at bay. Although Revisionist extremism went into eclipse after independence, whoever believed it was dead was deluded. Following Israel's conquest of all of Palestine in 1967, its romantic vision rose from the ashes. Though Stern was long dead and Lehi half forgotten, the ideas that inspired them were alive again in the Greater Israel movement. Although Heller does not explore the Stern Group's legacy, then enduring nature of Stern's philosophy makes his book a worthy and interesting read.