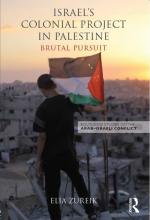 Palestinian sociologist Elia Zureik has made several pathbreaking contributions to the study of Palestine and the Palestinians. His first book, The Palestinians in Israel: A Study in Internal Colonialism (Routledge and Kegan Paul, 1979), constitutes a milestone in the study of Palestinian society inside Israel, particularly his exploration of the reproduction mechanisms that sustained the initial racial hierarchies between Jewish settlers and native Palestinians despite considerable socioeconomic changes. In successive publications, Zureik analyzes the strategies, methods, and governance practices that Israel has pursued to ensure its control of the Palestinians, stating in the coedited volume Surveillance and Control in Israel/Palestine: Population, Territory, and Power (Routledge, 2011) that his aim is twofold: “First to provide up-to-date information about population control and surveillance in Israel/Palestine on both sides of the Green Line; second, to fuse the mushroomingdiscipline of Surveillance Studies in the West with theoretical and methodological considerationsthat have bearing on the issue of colonialism” (p. xx).

In Israel’s Colonial Project in Palestine: Brutal Pursuit—the culmination of Zureik’s lifelong research on Palestine—he goes one step further. Covering a wider historical, demographic, and theoretical terrain, Zureik discusses the impact of the Zionist project on the Palestinians since its inception, critically engaging with Michel Foucault’s writings as his theoretical framework, particularly the published seminar Security, Territory, Population: Lectures at the College de France, 1977–1978 (Palgrave Macmillan, 2009). As such, he employs the concepts of colonialism and settler colonialism, biopolitics, and territory and surveillance, drawing largely on scholars who have extended and critiqued Foucault.

In chapter 1, Zureik presents a short survey of the demographic development of the Palestinian people since 1880. One can hardly ignore the implications of Zureik’s data on the pursuit of the Zionist project, according to which “by 2020, it is projected that the number of Palestinians in historical Palestine alone, west of the Jordan River, will reach 7.2 million—compared to 6.9 million Jews” (p. 9), suggesting that Zionism is far from being a successful settler-colonial formation—like white settlers in the United States and Australia—in eliminating the natives. Rather Israel will soon become a state governed by a minority of settlers, a reality that will comprise a serious challenge to its legitimacy and will likely drive it to increase its surveillancepractices and employment of repression. Zureik continues to chapter 2 by outlining the practices of Zionist colonization in Palestine, comparing them to those used by other European settler colonization projects, including the takeover of the land and natural resources, the infringement of native rights, and eventually the destruction of Palestinian society. Moreover, Zureik discusses the use of language of obfuscation to give such practices an idealistic overtone.

In chapter 3, he explores the indispensability of surveillance for any colonization project, showing how Israel has used and developed surveillance practices to disempower and dispossess the Palestinians, as well as to provincialize their lives and to police their memory. Security, particularly after 9/11, has become the main justification for such practices that embody an assault on privacy and human rights. Chapter 4 represents an exploration of some unpleasant colonial surveillance notions and practices in relation to biopolitics, which were used by Zionist institutions before 1948 and later on by Israel, including eugenics and racism.

While the majority of the book describes the methods used by Israel to govern the Palestinians and the devastating impact that Zionist colonization has had on Palestinian subjectivities and society, chapter 5 explores how science has been infused in the methods used to inflict suffering and damage on Palestinian bodies, and in some cases to eliminate them. The cruelest of such methods have been used to punish the Palestinian inhabitants of Gaza. Besides Israel’s frequent and devastating military campaigns in Gaza, the population is generally kept on the brink of catastrophe. An advisor to several Israel governments cynically referred to this practice, stating, “It is like an appointment with a dietician. The Palestinians will get a lot thinner, but won’t die” (p. 163). Moreover, postmodern theorists refer to such Israeli policies as “urbicide”: the destruction of large built areas in densely populated spaces, as happened during the Israeli assault on Jenin refugee camp in April 2002.

More generally, Israeli colonization is maintained through excessive force. Incarceration, targeted assassinations, and the employment of militarized force without due attention to civilians’ safety are widely used practices, and the facts supplied by Zureik in this regard are dreadful. For example, between 1967 and 2011, 40 percent of male Palestinians in the occupied territories had been incarcerated at one time or another, making Palestinians “the most imprisoned society in the world” (p. 164). Furthermore, between 2000 and 2012, 259 Palestinians were killed by targeted assassination, in addition to 434 Palestinians who were considered “collateral damage” (p. 171). Probably the clearest indicator of disproportionality in the use of force is the number of killed persons in Gaza versus southern Israel. Between 2001 and 2014, 6,816 Palestinian inhabitants of Gaza were killed in comparison to 135 Israelis across the border in the southern part of the country. The impact that these policies have on the most vulnerable of the Palestinian population, particularly children, is difficult to overestimate.

In the last chapter, Zureik provides data showing how the Internet and other communication technologies are employed by Palestinians as forms of everyday resistance. Palestinians use the Internet as a tool to subvert mobility restrictions and communicate with relatives and friends, but also as a way to publicize the Palestinian cause and to mobilize international solidarity despite their knowledge of Israeli and U.S. Internet surveillance. To limit such ameliorative effects of the Internet, Israel is conducting a “digital occupation” of the Palestinian territories through its control of the Internet connection between the area and the rest of the world. The book ends with the question of biopolitics, discussing Israel’s endeavor to gain international legitimacy as a Jewish state.

The result of four decades of research, the book is a welcome addition to Palestine studies and related fields. Zureik’s overview of the major theoretical debates surrounding population control and surveillance studies, presented at the beginning of each chapter, make the book a valuable source for researchers not only of Palestine, but also of racism, surveillance, and settler colonialism.

Ahmad H. Sa‘di, professor of political sociology at Ben-Gurion University of the Negev, is the author of Thorough Surveillance: The Genesis of Israeli Policies of Population Management, Surveillance and Political Control towards the Palestinian Minority (Manchester, UK: Manchester University Press, 2015).