Gaza as Metaphor, edited by Helga Tawil-Souri and Dina Matar 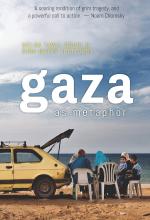 The cover of this book dedicated to Gaza and its ordeal is a very eloquent photograph (by Tanya Habjouqa) showing a family in Gaza City picnicking on the beach. Three hijab-wearing women and a man, along with two young boys, are sitting face to the sea, back to the photographer, on white plastic chairs, near an old and rusty car with an open trunk. The sea is dark and so are the clouds on the horizon: it looks like autumn. The photo brilliantly encapsulates Gaza’s paradoxical metaphor: Gaza as a symbol of confinement—a vast concentration zone—despite being a strip of coastal land on the edge of the Mediterranean. The sea is normally an open space par excellence but, in Gaza’s case, it is a space shut by one jaw of the Israeli vice holding the Strip. More than under normal conditions, the seascape thus becomes a most precious occasion to escape in dream.

Conceived in the wake of the 2014 Israeli onslaught on Gaza (Operation Protective Edge), the book stands up excellently to its title and to the sensation conveyed by the cover photograph. In their joint introduction, Helga Tawil-Souri and Dina Matar explain their purpose: “We use Gaza as metaphor to ask how the place, its people, its culture and its historical processes can help us understand the contemporary condition of Palestinians, in particular, and the condition of dispossession, in general.” They have therefore designed the book in four roughly equal parts, like the movements of a symphony: “Living Gaza,” “Placing Gaza,” “Narrating Gaza,” and “Thinking Gaza.” No less than nineteen contributors, in addition to the two editors, have been mobilized for this endeavor, including several names familiar in Palestine studies. This means, of course, that each contribution is relatively short—a dozen pages on average—making the book all the more readable as most pieces are written in lively style. They cover a wide spectrum of genres, from mood chronicles to theoretical reflections.

“Living Gaza” is about life in the time of the terrible 2014 Israeli onslaught. Starting with Tawil-Souri’s reflection on Gaza as a metaphor standing “for the ills of our modern world” (p. 26), it includes Said Shehadeh’s description of Israeli mass torture complemented by the testimony “Gaza as a Metaphor for Unsustainability” by UNRWA commissioner-general Pierre Krähenbühl. Mouin Rabbani analyzes the political circumstances of the onslaught from the perspective of both Israeli politics and Palestinian politics. Gaza residents Haidar Eid and Naim Al Khatib convey the experience of living in the Strip during the onslaught, the first somberly, the second in a black humor mode.

“Placing Gaza” is about locating Gaza in both space and time. Black humor carries on with a witty piece on tunnels by Gazan expatriate Khaled Hroub. History is considered both from the wider angle (Salman Abu Sitta) and in Gaza’s own words, that is, the evolution of designations of Gaza by its inhabitants (Jehad Abusalim), while Ilana Feldman and Glenn Bowman reflect on Gaza’s confinement.

In “Thinking Gaza,” Darryl Li reflects on Gaza as constituting a “frontier” of Zionism in its treatment of Palestinians, turning the Strip into what Ariella Azoulay describes as a “concentration-place,” a term she borrows from the Gaza entry in an Israeli military dictionary. Nimer Sultany engages in a sophisticated discussion of Israel’s repeated onslaughts on Gaza in the light of international laws on war, repetition being also a key theme of Sherene Seikaly’s consideration of “the archive that is the Palestinian condition” (p. 231).

In a brief but most poignant contribution to this remarkable collection, Sara Roy—the international scholar whose name is most closely associated with Gaza ever since her 1995 book, The Gaza Strip: The Political Economy of De-development, published by the Institute for Palestine Studies—defies the taboo on “any kind of comparison between the Jewish victims of the Holocaust and the Palestinians living under Israeli occupation,” at the risk of “de-legitimizing” herself as friends warned her, some of them screamingly (p. 219). At the end of a moving description of Gaza’s ordeal, she concludes: “How can I not think of those innocents murdered in Gaza [in the summer of 2014]—among them over five hundred children—alongside my grandfather, grandmother, and [her aunt who died at the age of twelve] Sophie? Refusing any such association or bond, as I have been told I must do, is not only the end of Holocaust consciousness, it is the end of Jewish ethical history” (p. 224).

Gaza as Metaphor is an exemplary collection: comprehensive despite its relatively small size, greatly readable, very stimulating, and most satisfying intellectually and aesthetically: a landmark in Gaza studies and an important addition to Palestine studies.

Gilbert Achcar is professor at the School of Oriental and African Studies (SOAS), University of London and chair of its Centre for Palestine Studies. He is the author of many books including The Arabs and the Holocaust: The Arab-Israeli War of Narratives (New York: Metropolitan Books, 2010); The People Want: A Radical Exploration of the Arab Uprising (Berkeley: University of California Press, 2013); and Morbid Symptoms: Relapse in the Arab Uprising (Stanford, CA: Stanford University Press, 2016).