The Re-Emergence of the Single State Solution in Palestine/Israel: Countering an Illusion, by Cherine Hussein 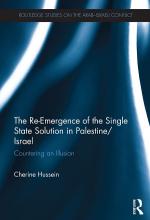 The Re-Emergence of the Single State Solution in Palestine/Israel: Countering an Illusion, by Cherine Hussein. New York: Routledge, 2015. 200 pages. $145.00 cloth.

Along with its larger ambitions, this book is a useful primer on land use in Israel/Palestine, the number and location of illegal settlements, Israel’s differential laws for Jews and non-Jews, various Palestinian and Israeli political factions and parties, the history of the Boycott, Divestment and Sanctions (BDS) movement, and the rich and largely unknown history of the one-state idea, which is as old as Israel itself. Aptly fitting her theoretical approach, author Cherine Hussein focuses as much on the Israeli opponents of Zionism as the Palestinian, and the increasing popularity of the one-state idea among key sectors of the Israeli left.

Best of all, Hussein’s argument has an internal harmony. Her case’s components fit tightly together with cumulative force. Let us begin with her argument’s premises. The disaster of the Oslo Accords, which signified a capitulation of the Palestinian leadership to Israeli strategic interests, has had the effect of starkly illustrating the unviability of the two-state solution. The very abjectness of defeat—growing corruption within the Palestinian Authority, ending the call for the right of return, the divisions between the Palestinian Authority and Hamas—has produced, paradoxically, the seeds of potential victory in the sense of rekindling interest in a, perhaps phased, one-state strategy.

The idea that Israelis and Palestinians could live together as equal citizens in a single democratic state may seem utopian, but the even bleaker illusion—the dystopia, one might say—is that Palestinians could ever have a state of their own, so disarticulated, militarily occupied, and embargoed have the territories become. The two-state solution is dead not just because of its increasingly more cynical promises of future sovereignty, but because it is territorially defunct. The bantustanization of the West Bank has moved the two-state idea past the point of no return. The whole purpose of Israeli strategy has been to make any future Palestinian state impossible. It has succeeded too well for Israel’s crafted deception to survive.

By the same token, the one-state solution is not so much a murky dream as an already established fact—at least in the (perhaps equally dystopian) sense of what Israel/Palestine is right now: a single, militarily unified, apartheid state with two sets of laws, rights, and privileges. The significance of this fact needs to be grasped, while changing perceptions, so that proper conclusions can be drawn. How different, in other words, does the conflict appear when the discourse shifts from mutual assurances of security between neighboring states to the savage domestic treatment of an ethnic minority (which is, of course, really the majority)?

But how then to change perceptions? Hussein adopts what she calls a Saidian/Gramscian perspective. She remarks, accurately, that Edward Said, in addition to being the most eloquent proponent of the one-state solution after Oslo, was deeply influenced by the great Italian philologist, activist, and revolutionary, Antonio Gramsci. Gramsci had stressed the pedagogical efforts of “organic intellectuals” (intellectuals who organize around programmatic interests), who understood that challenging established power meant unraveling its “common sense.” Her efforts are to show the efficacy of such a strategy when the commonsensical discourse around Israel/Palestine has become so vulnerable.

Rather than seeking state recognition from elite bodies like the United Nations or the White House, or exposing the weak to violence in doomed military campaigns, real power lies in changing the subject. Said’s own prolific creation of a rhetoric of Palestinian dignity is a model for other organic intellectuals to follow in their pursuit of “intellectual-moral reformation.” The tightness and coherence of Hussein’s argument is all the more persuasive with her finding a single articulate cause for this invention of a new common sense around Israel/Palestine: the BDS movement. Borrowing Gramsci’s famous coinage of a war based on ideological preparation and persuasion rather than military confrontation, she summons, then, an “anti-Zionist war of position” for intervening into “the ethico-political realm” (in Gramsci’s language).

There are some downsides to her presentation. She does not engage with the rich critical literature on the cultural-political Gramsci, nor (crucially) does she discuss those critics who have written precisely on the Said-Gramsci connection before her. As a result, she continuously leans on one or two critics who followed in others’ wakes, and never attained the depth of earlier studies. Also, she concedes that she was unable, for reasons of time and funding, to conduct interviews with Palestinian intellectuals living under Israeli occupation (a key omission); and was unable to conduct interviews with Palestinian citizens of Israel or Palestinian refugees in Syria, Lebanon, and Jordan.

Nevertheless, her vigorously argued case—filled as it is with detail, demanding exegesis, logical firmness, and effective repetition of earlier points—succeeds overall. She is an activist, very much so, and lives up to the image of the organic intellectual that she invokes in more scholarly fashion in the pages of her book.

Timothy Brennan is Samuel Russell Chair in the Humanities at the University of Minnesota, and a professor of comparative literature, cultural studies and English. His most recent book is Borrowed Light: Vico, Hegel, and the Colonies (Stanford University Press, 2014). He is at work on Borrowed Light II: Imperial Form, as well as Places of Mind, Occupied Lands, an intellectual biography of Edward Said.