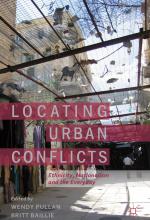 Wendy Pullan and Britt Baillie’s edited book brings together a series of multidisciplinary essays exploring how cities are shaped by ethnonational and religious conflicts. The focus is on the ways conflict materializes physically and symbolically in and through the urban fabric, particularly as it affects public spaces and the everyday. Important as these contributions are, the volume is marked by a fundamental absence: a sustained engagement with the historical geographical contingencies and structural conditions that generate these conflicts in the first place. In fact, the book tends to take for granted the ethnonational and religious nature of urban conflict without problematizing the forms of sociopolitical, economic, and cultural violence that precede, shape, and sustain these conflicts through time. Further, this collection shies away from critically addressing how research on urban conflicts and contested cities often assumes ideal and possible futures of inclusion and plurality through planning. These visions might be valid for certain liberal democracies, yet in contexts defined by structural racialization, oppression, and segregation this evocation can certainly be analytically, theoretically, and politically misleading.

This absence is compounded by the editorial decision to study together a set of Middle Eastern and European cities, regarded as “contested,” that are very different in nature and trajectory— including Jerusalem, Hebron, Beirut, Odessa, Vukovar, Belfast, Berlin, and Ceuta. This loose approach is best captured in the editors’ own words: “We are resigned to limited unity in methods of research in favor of the critical distance that juxtaposition rather than integration poses” (p. 4). What unites these cities, we are told, is that they experiment or have experimented with “unusually prominent” forms of ethnonational and religious conflict. However, learning about insights of and common threads emerging from historical and contemporary urban conflicts, as the editors hope to achieve, cannot happen only through juxtaposition; this should also materialize through a commitment to developing theories and methodologies that make sense of the issues at hand.

Regardless of these editorial choices, the chapters are largely of good quality and raise crucial questions about how urban space and architecture are shaped, contested, and transformed in urban conflicts. The materiality of urban conflict is one of the clear themes that emerges throughout the book. The essays by Caroline Humphrey, Pullan, and Baillie, for instance, highlight how the built environment is not a backdrop but rather an active participant in shaping sociopolitical, economic, and cultural processes in urban conflicts. From soft and hard infrastructures—such as walls and buffer zones—in Nicosia, Berlin, and Jerusalem to war memorials in Vukovar and a giant stairway in Odessa, these spaces are presented not only as a battlefield but also as agents that actively constitute urban conflict. As put by Humphrey in her brilliant essay, “architecture participates in an unfolding drama” (p. 52). These chapters show thus how the urban fabric works as the continuation and expression of politics by other means, and also the ways it can be used to rewrite the history of cities, undermine the nature of the urban experience, create profound spatial discontinuities, and enhance and perpetuate sociopolitical fractures.

Another theme that emerges from the book is the everyday and urban imaginaries of cities marked by conflict. The essays by Craig Larkin, Allan Cochrane, and Milena Komarova and Liam O’Dowd, for example, capture the significance of spatial narratives embedded in the fabric of cities in an attempt to disrupt sociopolitical and cultural divisions. Drawing on processes of reconstruction and urban development in cities as diverse as Beirut, Berlin, and Belfast, these authors highlight the complex relations between political violence, memory, urban matter, and capitalist entrepreneurialism, as well as the precarious nature of memorializing spaces shaped by violence. Even though Larkin’s essay on Beirut is the only one that engages in actual ethnographic work, these contributions help to disentangle the lived experiences of division. Ultimately, all show the ambivalence of reimagining and producing these places as “ordinary cities” through a politics of neoliberal urban redevelopment that often ends in failure.

Imperial and colonial forms of modern planning surface as a central theme in various chapters of this collection. The essays by Salim Tamari and James Anderson comparing the settler colonial cities of Jerusalem and Belfast stand out here. Whereas Tamari’s crucial essay effectively challenges European and Zionist claims of ownership to urban modernity in an Arab East otherwise portrayed as backward, neglected, and dominated by a parasitic urban elite, Anderson explores the use of demography, partition specifically, as an indispensable and modern technology of imperialism that critically shapes the fabric of urban conflict.

Finally, the chapters by Hillel Cohen and Amneh Badran address the complexities of political organizing in Jerusalem, providing two different accounts to tell the same story. On the one hand, Cohen emphasizes both the national and religious aspects of the Israeli-Palestinian conflict and a narrative marked by symmetrical political claims of victimization to problematize joint urban struggle. Bedran, on the other hand, provides a corrective to Cohen’s account by explaining the flawed ideological framework, political features, and vision that underpin most of the Israeli groups and activists that Cohen sees as potential Palestinian allies in the struggle for the city. These essays are perhaps most representative of the dubious “friction” encouraged by the editors. As they put it, “this acceptance and even willingness for friction in both approach and findings reiterates the nature of the cities themselves as well as the wider research field” (p. 4).

The resulting book is a collection of essays that offers stimulating insights and raises important questions about urban conflicts. And it does so in ways that neither treat conflict purely as an abstract or political issue, nor does it render the urban as the determinant force of conflict. However, a general disregard for the structural conditions that shape urban conflicts, the unfortunate editorial choice for juxtaposition, little engagement with existing critical literature on postcolonial, settler-colonial, and critical geography on urban conflicts, as well as the lack of a concluding section, results in a book that appears more as a loose compendium of essays than a structured sequence of chapters. In spite of these shortcomings, Locating Urban Conflicts is a book that blends relevant work for scholars trying to make sense of the modern spatialities of structural violence.