Daniele: Women, Reconciliation and the Israeli-Palestinian Conflict: The Road Not Yet Taken 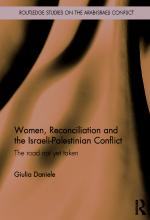 Women, Reconciliation and the Israeli-Palestinian Conflict provides a detailed discussion of Palestinian and Israeli women’s collaborative political projects aimed at building mutual understanding between the Israelis and Palestinians, and working toward “recognition, reconciliation, and conflict resolution.” Using the Jerusalem Link as her primary case study of formal collaboration between Palestinian women from East Jerusalem and Israeli women from West Jerusalem, Giulia Daniele tracks the initiative from its development, discussing the processes of change and development it undertook, up to its conclusion. In the process, the author analyzes the project from two theoretical perspectives: ethno-nationalist narratives and settler colonialism.

The book is divided into two parts. In the first part of the book, Daniele discusses Palestinian and Israeli women’s joint projects within the framework of ethno-nationalist narratives and examines the challenges and difficulties faced by each group. This framework enables Daniele to properly depict the voices and stories of her interviewees, both Palestinians and Israeli Jews. It also provides a space to account for the historical differences not only between the two main conflicting nationalist groups, but also delineates the differences between Jewish Israeli women, focusing on Ashkenazi and Mizrahi women and the oppression of the latter by the former.

In the second part, Daniele discusses the challenges of ethno-nationalist narratives through a critique, which involves a rather detailed analysis of the conflicts and contradictions embedded in both Zionism (or the Jewish national movement) and its interests in Palestine and Palestinian nationalism and its fulfilment of its rights to Palestine including the right of return. This discussion leads Daniele to the conclusion that both “coexistence” and the “two-state solution” conflict with and stand against the interests of both nationalisms, and therefore cannot provide a viable solution to the conflict. After rejecting the two-state solution, Daniele goes beyond the nationalist narratives and proposes the emerging academic and practical perspectives of a one-state society based on the notions of democracy, equality, and civic citizenship. Within the context of the one-state solution, Daniele succeeds in replacing the hegemonic nationalist narrative of each side with notions like civic citizenship and equality for both peoples. However, the author makes it clear that such a possible solution was never on the table of discussion between Israeli Jewish and Palestinian women and definitely not on the table by the Jerusalem Link. In fact, the realization by most Palestinians for the need of such a solution has brought the demise of the Jerusalem Link and the various Israeli-Palestinian collaborative projects.

Daniele’s conceptual methodology which allows her to move from the ethno-nationalist paradigm to that of settler colonialism has undoubtedly enriched this book. This move enables the author to challenge mainstream feminist perspectives on conflict resolution which are largely devoid of race and class, adopting instead a feminist framework of intersectionality. Feminist intersectionality which, among other things, draws on gender, race, and class, becomes particularly clear through Daniele’s highlighting of the “original sin”—the historic basis of the creation of the state of Israel. This historic perspective has made it possible for the author to declare that Israel was built on the demise of the Palestinian socioeconomic and cultural existence and the exploitation and oppression of Mizrahi and other non-Ashkenazi Jewish ethnicities. This historic narrative of the establishment of the state of Israel on the ruins of Palestinian society helps clarify the settler-colonial nature of Zionism. It also suggests the need to go beyond the Jewish national narrative, addressing Palestinian women’s history, memory, and lost socioeconomic base. It is thus the intersectionality of all such factors which are deemed necessary in understanding and attempting to resolve the Israeli-Palestinian conflict. In this respect the book is nicely laid out and the arguments well presented.

Still, I find the book to suffer from misuse of concepts, more specifically, concepts which lack a clear definition. For example, during her discussion of ethno-nationalist narratives and the relationship between Palestinian and Israeli women, the author falls into an equalitarian paradigm, using concepts such as “reciprocal victimization,” “foundation myth/‘mytho-histories’” (pp. 20 and 24), and “imagined community” (p. 59). Such notions I find to be politically and theoretically problematic, and in some cases also inaccurate. To start, I am not clear what the author means by “reciprocal victimization.” Yes, the Jews were victimized by the West through the Holocaust; however, the Palestinians are not responsible for this victimization. The fact remains that within the Israeli/Palestinian conflict there is one major victim and these are the colonized Palestinians and one victimizer, the Israeli colonizer. Furthermore, Palestinian nationalism is not imagined in the Israeli sense of a totally constructed nationalism. The author here could have used Shlomo Sand’s book, The Invention of the Land of Israel (Verso, 2012), to deconstruct the Jewish national construction. As for Palestinians, their history and memory remain alive and are still narrated by actual living people.

In addition, Daniele asserts that “Palestinian Israeli women organized protests during ‘al-Ard’ movement” (p. 71). However, she provides no evidence of Palestinian women organizing during al-Ard movement, nor, to my knowledge, has there been any evidence suggesting such a role. Additionally, she describes Mizrahi people (especially women) as a mere ethnic community discriminated against by Ashkenazi women, making no reference to the fact that at the very beginning of their “forced immigration,” Mizrahim were racialized and isolated from the hegemonic Ashkenazi Israelis.

Finally, I found Daniele’s attempt at following Sheila Katz’s narrative of collaborative experiences between Palestinian and Israeli women (pp. 97–98) problematic and out of context. Zionist settler colonialism and its consequent destruction of the Palestinian national economy through its exclusivist and exclusionary nature were totally missing from Katz’s account, making her argument flawed. In Women in Israel: Race, Gender and Citizenship (Zed Books, 2011), I provide a scathing critique of Katz’s methodology and the sources of evidence used in her book, especially the author’s reference to “solidarity” between Palestinian and Jewish women under colonialism. The description of a women’s demonstration in a British factory found in Katz’s book as an example of such solidarity was borrowed by Daniele to demonstrate collaborative work between Palestinians and Jews. Yet, this is no proof of mutual Jewish-Palestinian solidarity. In fact, Palestinian workers were excluded on an ethnic basis from all Jewish work established during the Zionist settler-colonial project.

Despite the above criticisms, I still find Daniele’s analysis a welcome contribution to feminist debate on the Israeli/Palestinian conflict. Her method of feminist intersectionality which recognizes the importance of race, class, and history in the making of gender politics is particularly interesting. Finally, I find the author’s positionality—sympathetic to oppressed and racialized women, namely Palestinian victims of the state of Israel and Mizrahi women—especially necessary in the face of current Israeli aggression and international silence around the repeated violations of Palestinian human and political rights.

Nahla Abdo is professor of sociology and anthropology at Carleton University. She is the author of several books and numerous articles. Her most recent publications include: Captive Revolution: Palestinian Women’s Anti-Colonial Struggle within the Israeli Prison System(London: Pluto Press, 2014) and Women in Israel: Race, Gender and Citizenship (London: Zed Books, 2011).