Allan: Refugees of the Revolution: Experiences of Palestinian Exile 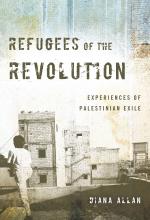 “The world is lost between the mouths of the people,” says one of Diana Allan’s protagonists toward the end of her study. This humble assessment of the Palestinian predicament runs as an invisible red thread throughout Refugees of the Revolution. The book provides a compelling testimony of the day-to-day struggles in Shatila, one of twelve Palestinian refugee camps in Lebanon. Allan’s carefully crafted ethnography avoids reducing the camp to the prevailing sense of hopelessness and despair that has been constitutive for the Palestinian experience and instead delivers a thought-provoking, self-critical reflection on the paradoxes and limits of camp research. Allan is well aware that she is an integral part of the rhetorical machine that all too easily silences or simply overwrites the voices of refugees in the attempt to show solidarity with the Palestinian struggle. Addressing the violence and dispossession underpinning political activism and research has been a major motivation for her book.

The empirical thrust of Allen’s study is built around first person accounts on the everyday challenges of survival in Shatila. Highlighting the material dimension of the national struggle rather than its historical and geopolitical relevance not only makes room for the refugees to articulate senses of self and belonging on their own terms; it also shows how the enduring nature of struggle has become a central reference point for refugee identities in and of itself. Allan’s ethnography takes the reader across a wide spectrum of local routines and practices, revealing intimate details of friend and family relations as well as intense, hard-felt struggles against the deeply divided leadership of the camp. Foregrounding the more immediate concerns of corruption, poverty, and marginalization over the wider question of the Palestinian political project and its future, she challenges convenient assumptions that root the refugees’ sense of home, identity, and belonging within the national doxa of resistance and longing for return. By dismantling the ideological facade of national attachment, she reveals how personal fears, doubts, and uncertainties have turned hope itself into a much-longed-for destination.

Unlike other anthropological accounts that insist on linking the micropolitics of Shatila to the wider political struggle,* Allan unpacks the complex assemblage of local attachments, which are grounded in the infrastructures of day-to-day interactions and exchanges that invest the camp with a life and intrinsic value far beyond the national cause. In so doing, she illustrates how social relations and solidarities are maintained by a people with nowhere to go and no alternative beyond the broken promise of return.

Chapter 1 traces the gradual shift in the culture of memory in the refugee imagination to show how, following the forced departure of the Palestine Liberation Organization from Lebanon in 1982, the growing presence of international nongovernmental organizations both intensified and eroded the symbolic resonance of the Nakba among refugees. Shatila residents redirected commemoration events of the national trauma toward international audiences, turning these events into a strategic asset to secure funding rather than a signifier of the national cause. Yet this strategic shift in their relation to the past locked the refugees into “an economy of victimhood” (p. 65) that demanded to uphold the idea of “return” as the ultimate vector to justice at the expense of more immediate pressures such as political disenfranchisement and social exclusion in Lebanon.

The steady decline in social and political resources, as Allan shows in subsequent chapters, eventually gave way to new forms of individual and collective support. It enabled the refugees to resituate their lives and futures in everyday practices of survival. Social support structures such as informal credit associations or the “illegal” tapping into water and electricity grids not only reinstated a sense of fairness, predictability, and trust among camp dwellers, but also created new forms of solidarity and attachment that gradually replaced old inherited structures of kinship or political affiliations along factional lines (p. 98). These locally embedded architectures of hope and reassurance replaced the idea of Palestinians as “returning people” (p. 224)† and made room for a “social somatics of attachment”—a sense of place and belonging that is more grounded in embodied practices of survival than the historical signifier of the homeland itself (p. 216).

“The refugees no longer represent a community of memory in the sense of being connected to Palestine and each other,” she concludes. The tendency of seeing refugees as historical and ideological subjects rather than as agents of their immediate socioeconomic circumstance ignores the dispositional forms of agency Allan witnessed during her four years in Shatila. One of her major contributions is illustrating how the “felt intensities” of everyday struggle have developed new “vernaculars of hope and survival” in which uncertainty and doubt provide as much a source of hopelessness as they open up new horizons to reclaim a sense of purpose and self-pride (p. 224).

Allan’s book does not suggest that the national struggle has become irrelevant or meaningless for the “Refugees of the Revolution.” Rather, her account demonstrates how the conceptual potency and moral appeal of national claim-making have been overemphasized to a point where they imprison the refugees in a stalemate of the wider political project, preventing them from gaining visibility and recognition as a political community in its own right. Allan’s sharp but unsentimental analysis of mundane, everyday encounters enables these emerging subjectivities to articulate themselves in their own language, redirecting the vector of hope, dreams, and anticipation to the future rather than memories of the past.