Editor's Note: This is the second part of a trilogy mapping a Lebanese family's escape from Beiurt to the Mountain during the 1982 Israeli invasion of Lebanon.

In my earlier article for Palestine Square — First, we leave to the mountains — I chronicled my family’s experiences during the 1982 invasion of Lebanon by Israeli Occupation Forces.

In this second part, I revisit the villages of Ain Zhalta and Nabaa al-Safa to hear my relatives’ firsthand accounts of living, witnessing, and surviving the invasion.

Today, Ain Zhalta and Nabaa al-Safa form a single municipal unit. A mix of Druze and Christian communities — including Maronites, Protestants and Greek Catholics —historically inhabit the villages. Ain Zhalta is renowned for its mild summer and majestic Cedar Forest, and Nabaa al-Safa is known for its waterfalls, restaurants, and breathtaking filming locations. The Barouk Mountain feeds the waterfalls, which then meander into the Damour River.

Between the mid-1980s and the mid-1990s, the main road next to the waterfalls thrived, thanks to a farmers’ and crafts market for tourists. It prospered due to its strategic location along the alternative route to the cut-off Beirut-Damascus Road, which connected the capital Beirut to Southern Mount Lebanon.[1] This attracted Muslim communities — including many Palestinians — who could not visit Christian geographies in Northern Mount Lebanon, separated as they were by the war’s sectarian geopolitics.

My source — who wishes to remain anonymous — still recalls how this strip started with one hut appropriating the sidewalk, before a few others followed suit:

The sidewalk and the riverbank (حفة قنا المير) [all of it] was the property of the Maronite Church. This is the same famous water channel constructed in the 19th century to carry water from Nabaa al-Safaa to the Beiteddine Palace complex, where Christian-converted Emir Bashir II ruled Mount Lebanon under the Ottomans, replacing the Ma’ns Druze Emir dynasty. Emir Bashir II donated this property to the Maronite Diocese of Saida and Chouf, which collected fees in exchange for the [use/rent] of this property. Apparently, there was an informal agreement between the Church and the Druze leaders since the farmers’ and crafts market appropriated the sidewalk in the 1980s.

I interviewed two relatives who witnessed both the initial fighting of the 1982 invasion and the subsequent occupation. The first witness recounts the details of the battle at Nabaa al-Safaa and how the Israelis entered Ain Zhalta from its elevated southern entrance, coming from Batloun. With a flair for storytelling, his deep voice glowed with composure as his sharp memory recalled times of great endurance.

The day of the invasion, he filled up his Datsun with gas in case he and his family might have to make an emergency escape. For three days during the battle between the Syrian and Israeli troops, he took his wife and child to the kitchen on the ground floor of the house, where his brothers-in-law lived. Landlines were out; everyone was cut off from neighbors and relatives. Amidst the whizzing bullets and shell fragments, a piece of shrapnel penetrated his son’s bed cover.

After the fighting stopped and the Israelis took control of the area, soldiers entered their house and asked them about their religion. My witness declared that he and his family were Druze, while the elderly couple stated that they were Christians. The situation took the Israeli soldiers by surprise, most probably because they did not expect such coexistence. They laughed and called onto other soldiers to come see!

The second witness remembers how their family made critical decisions in a split second that fateful day. A comrade at the Union of Progressive Women (الاتحاد النسائي التقدمي) informed her that the invading forces were closing in. Assuming that Beirut would not fall to the invasion, she suggested that her ill brother immediately leave for the capital, where he typically received dialysis treatment a couple of times each week. He could not access such treatment in the region, leaving him and his family with no choice but to succumb to the dictates of centralization in Beirut. My witness’ parents were also worried for the rest of the siblings’ safety, so they asked all their children to leave, while they stayed behind in Ain Zhalta.

They left with their brother to undergo dialysis in Al-Makassed General Hospital in Beirut. On their way back to Ain Zhalta once the fighting stopped, the road was dotted with destroyed Soviet-made Syrian tanks. Two Israeli checkpoints stopped them first in Bkheshtay (west of the City of Aley) and then in Nabaa al-Safa. At the second checkpoint, a soldier leaned his upper body into the car window, inspected their faces, then asked the male passengers to step out.

“Are you a Walidy?” the officer asked one of the brothers with a broken Arabic accent. “Why aren’t you and al-Walidy not cooperating with us?” (أنت وليدي؟ ليه انتو والوليدي مش عم تتعاملوا معنا؟). By “you,” the soldier meant the Druze, typecasting the man for the entire community. And “al-Walidy” was his colonial adaptation of the Arabic name Walid, referring to the Druze militant and political leader, Walid Jumblatt.

The Ambush and the Battle

Calmly and confidently, my first witness narrated how the initial fighting came about. His dynamic hand gestures spatialized the narration, empowering his description of the terrain, the names of people and places, and the military positions of vehicles and fighters.

The Israeli column reached Batloun, about 10 kilometers southwest of Ain Zhalta. He witnessed the Syrian Army and its supporting fighters (Lebanese and Palestinians) leave their positions in Ain Zhalta and Nabaa al-Safa. For a few hours, the positions were empty until Syrian tanks and infantry arrived and set up an ambush in the area (see Figure 1). They made tactical use of the terrain and awaited the Israeli column descending along Ain Zhalta’s serpentine main road. 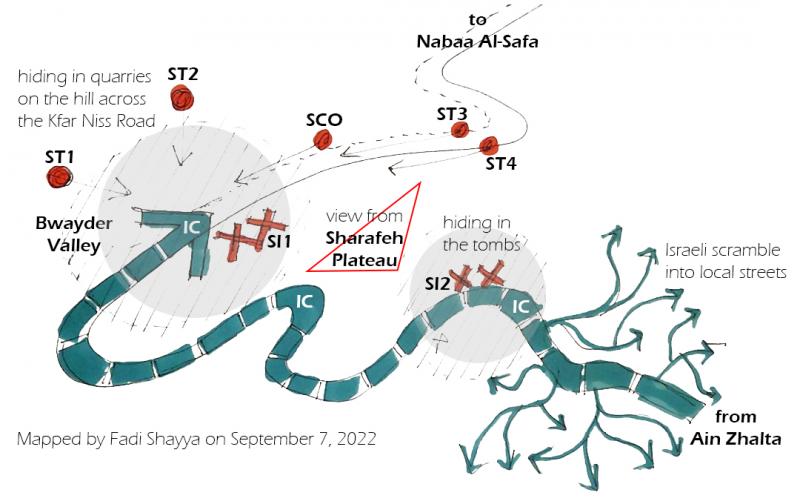 Figure 1: A mind map of the Ain-Zhalta-Nabaa al-Safa Battle, based on firsthand lived accounts and as never documented before. The map shows the Israeli Column (IC) advancing on the meandering road when it is encountered (grey circles) at two locations by an ambush of Syrian tanks (ST) and Syrian Infantry (SI), forcing the Israeli forces to scramble for safety within the local streets of Ain Zahalta. The Syrian commanding officer (SCO) and support fire tanks take cover down the road. (Illustration by author).

On the Kfar Niss road — half-a-kilometer across the Bwayder valley — a tank hid inside an old hand-dug sand quarry. Another crouched on a cliff’s edge. A third tank — probably containing the platoon’s commanding officer — hid behind a blind corner next to Al-Warhaniyeh road, and two more took cover between the houses at the lowest elevation of the Nabaa al-Safaa road, next to the waterfalls. The infantry, meanwhile, covered two locations: the sand quarries on the main road above Bwayder, and the tombs further up the road (next to my grandfather’s vineyard).

The tanks on the Kfar Niss road hit the front of the Israeli column, causing damage, and brought it to a halt. The infantry commenced their attack on the stationary column at the Bwayder location and next to the tombs. It is told that Syrian troops used knives when their ammunition ran out, and that sections of the column strayed off the main road and into the meandering streets of Ain Zhalta.

It was only when jets took out the Syrian tanks on higher ground — in Kfar Niss and across the mountain high grounds in Ain Dara — that the Israeli invaders defeated the Syrians and their supporters. My witness recounts stories from the town’s collective memory about Syrian soldiers escaping the battlefield by running across al-Safa Valley, most probably heading to the Syrian garrison in Ain Dara. While the Israelis collected their injured men and damaged vehicles, the locals buried the corpses of dead Syrian soldiers and their Lebanese and Palestinian comrades. 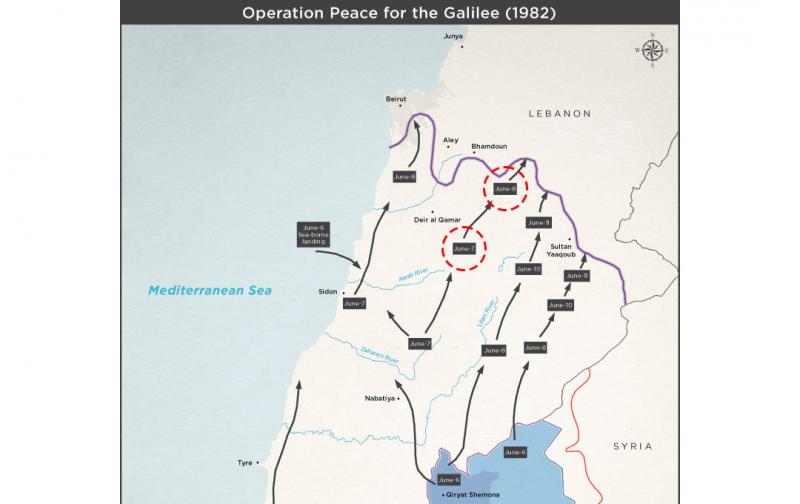 Figure 2: Map of the Israeli Invasion routes showing the route through Chouf / Ain Zhalta (second route in black from the left) on June 7 and 8, 1982. (Map source)

He recalls how the Israeli air force spread cluster bombs across the Nabaa al-Safa valley, as the Syrian soldiers retreated. While the Israeli military claims to have cleared cluster munition remnants, years later locals encountered some of these cluster leftovers. A boy was killed herding sheep; a man lost a limb holding one by mistake. Two men barely escaped death as their car drove over one.

Israelis took over the area. The next day, my first witness carried his son on his arm to signal that they were civilians, while checking the surroundings of the house.  Three days later, he went out for a walk and spotted abandoned Syrian tanks. The Israelis had scavenged them, collecting all munitions, and dismounting the machine guns. He approached a tank pushed to the side of the road — it was undamaged, and there were no traces of blood. He found a soldier’s military identity card inside the hull (see Figure 3) and hauled out two toolboxes (see Figure 4). Finders, keepers! He still has the ID intact in a nylon pouch, and he uses the tools to do repairs around the house. 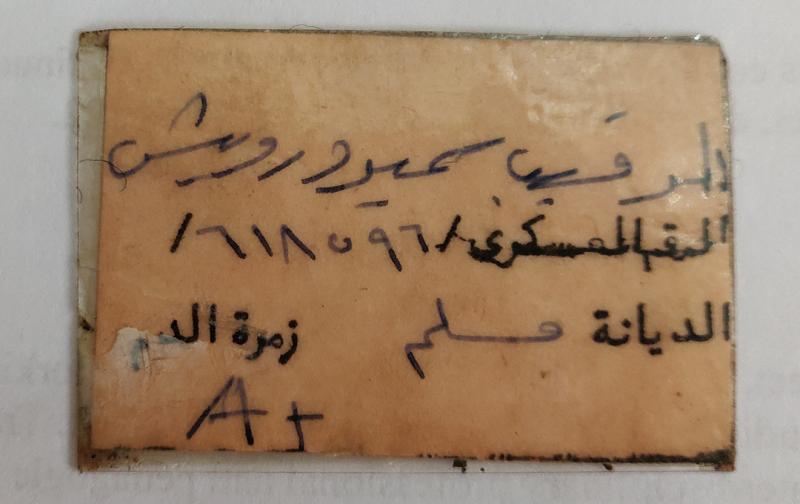 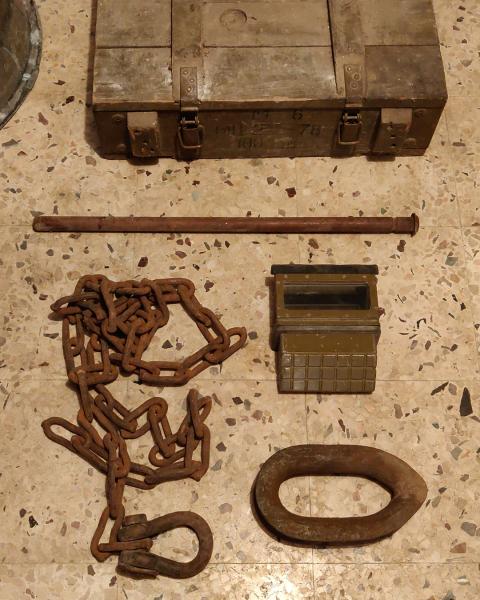 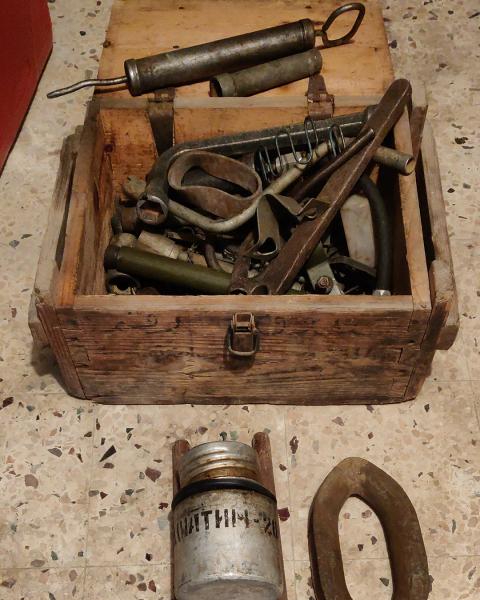 Figure 3 (left): Syrian military identity card found inside abandoned tank. The original writing in Arabic translates to, “Sergeant Samir Darwish. Military Number: 618596. Religion: Muslim. Blood Type: A+.” (Photo by author). Figure 4 (middle): A first tank toolbox contained towing chain, bars, and a periscope, among other stuff. The wooden box has Russian writing on the outside. (Photo by author). Figure 5 (right):  A second tank toolbox contained lubricant, an applicator, and wrenches, among other stuff. The wooden box has Arabic writing on the outside. The tin lubricant container reads ЦИАТИМ-201, which is the antifriction multi-purpose grease CIATIM-201. (Photo by author).

A week after the ceasefire, my witness met two men coming from the Kfar Niss road direction with a white cloth tied to a stick. They had walked all the way from their village, Brih, to check on their house and shop. In the meantime, Israeli soldiers swam under the Nabaa al-Safa’s waterfalls, polluting the locals’ drinking water.

A year later, in 1983 — while still under Israeli occupation — the Mountain War (حرب الجبل) erupted between Christian and Druze factions in the Chouf region. Roads between Southern Mount Lebanon and Beirut were cut off again. My second witness’s brother passed away on the dialysis machine in Beirut — his body could not be transported to Mount Lebanon for the burial. His body had to stay in the Druze burial grounds in Beirut — a small funeral was held, with his mother, brother, and a handful of other relatives in attendance. Meanwhile, in his hometown of Ain Zhalta, his father, sisters, and other brothers celebrated his defiant spirit and prayed for his soul. 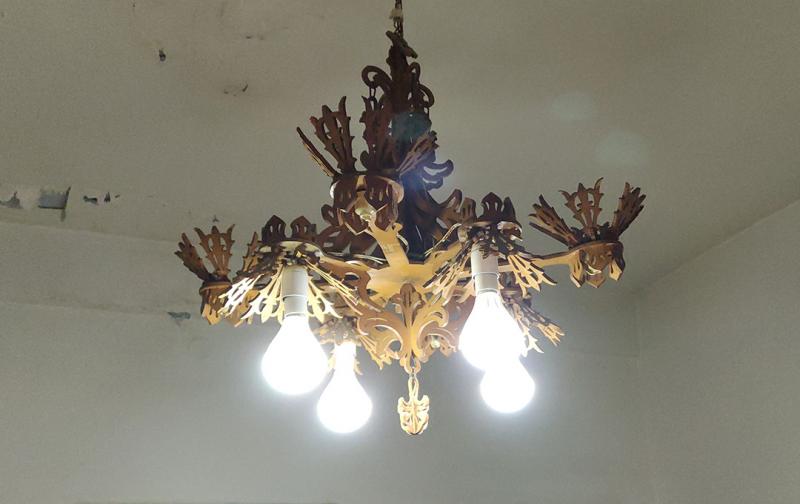 A plywood chandelier assembled by my second witness’s kidney-patient brother still hangs in their living room. To pass the time during the restricting invasion, the brother would painstakingly cut the parts on template-plywood sheets and create models of chandeliers, the Eiffel Tower, and other objects. (Photo by author)

Author's Note: I am grateful to my relatives for their courage and enduring love, and for agreeing to share their stories. I interviewed them between June 29 and September 6, 2022.

[1] When the Beirut-Damascus route was cut off during the Civil War, my father used to drive either through the Chouaifet-Bchamoun-Aitat route to get to Saoufar or the Damour-Kfar Him-Deir al-Qamar route to get to Ain Zhalta then Saoufar. I remember how my father drove on an almost impossibly steep road called Tarik al-Karameh (طريق الكرامة), which the Progressive Socialist Party opened as a strategic supply route in August 1984. It was manned by the PSP’s military wing, where they showcased an unexploded shell from the USS New Jersey Bombardment in February 1984.