The Palestinian people often draw from the words of prolific Palestinian writers and poets as they struggle against a 75-year-long Israeli Occupation. Ancestors of liberation literature have inspired generations, remaining as pertinent as ever. One prominent example is poet Fadwa Tuqan.

Tuqan was born in Nablus in 1917. She was heavily influenced by her brother, Ibrahim Tuqan, the Palestinian poet best known for writing Mawtini. He taught her how to write poetry at a young age after illness forced her to abruptly stop her education. Her pieces are loved throughout the Arab world – they explore a variety of themes, including feminine strength, human suffering, resilience, and the Palestinian people’s fight for freedom.

Tuqan wove elements of the struggles faced by Arab women in a male-dominated society in her work. Instances of this can be picked up in one of her most famous poems, Hamza. At one point in the poem, the speaker is distressed about the fight against the Israeli occupation. To comfort the speaker, Hamza tells her:

'My sister, our land has a throbbing heart,

it doesn't cease to beat, and it endures

the unendurable. It keeps the secrets

of hills and wombs. This land sprouting

with spikes and palms is also the land

that gives birth to a freedom-fighter.

This land, my sister, is a woman.'

"This land, my sister, is a woman," writes Fadwa Tuqan. She compares the land the Palestinian people are fighting for to the strength of a woman. The bloodshed, trauma, and devastation endured by the land and its people all represent the strength that a woman has, whether it is exhibited through childbearing or raising the next generation of freedom fighters.

Tuqan doesn't stray away from writing about the unfortunate hardships women like herself experienced. She has written about the restrictive nature of the patriarchy and its effect on her life as an Arab woman, most notably in her memoir A Mountainous Journey. In this excerpt, Tuqan writes about losing her free will in a household controlled by men: 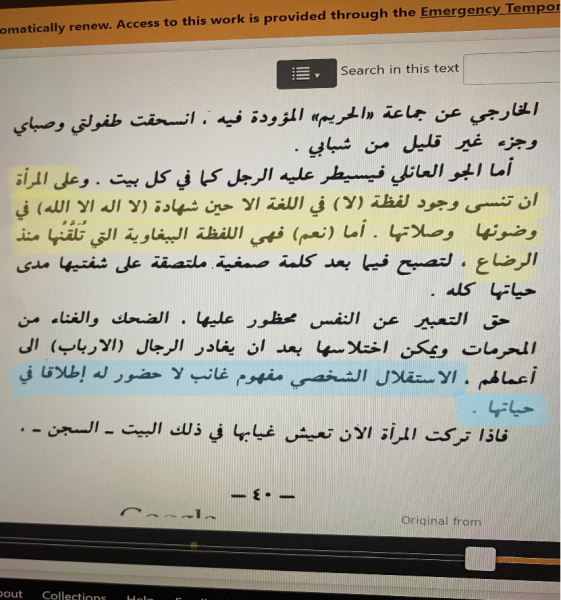 "Women have to forget the existence of the word 'no' in Arabic, except when it comes to reciting the shahada, 'there is no God but Allah,' during Wudu' and prayer. Meanwhile, 'yes' is the word she is taught to chant in a parrot-like manner since birth."

"The concept of independence is completely absent from a woman's life." (pg. 40)

Tuqan grew up in a conservative household and was hidden away from the public eye in her early years. Yet she rose to become an early Arab feminist icon, addressing women's issues publicly through her poetry. Today, we still see remnants of the repressive society Tuqan described in her writing –  Arab women and girls can relate to and sympathize with her stories.

Tuqan passed away in 2003 in the midst of the Second Intifada, one of the many Palestinian resistance movements she experienced. To this day, her words continue to resonate with the new generation of Palestine supporters and activists, who, like the famed poet, are not afraid to challenge harmful social norms. While she is primarily referencing the Palestinian struggle in her poetry, her writing can also apply to similar liberation struggles throughout the Middle East and anywhere around the world, where people are defending their land, dignity, history, and culture.

As we continue to see women’s rights being curtailed  across the Middle East – as well as a disturbing rise in femicide crimes and gender-based violence –  it’s clear that the fight for justice is far from over. Figures like Fadwa Tuqan serve as the foundation for today’s continuing movements, paving the way for the young to remain steadfast.