These details invite us to ponder the eerie, unverifiable ways in which history might repeat itself and to consider how ongoing settler-colonial occupation renders untenable a close-ended relegation of violence to the past
–Fatima Aamer

We are pleased to announce the release of the latest issue of the Journal of Palestine Studies headlined by an analysis of the Journal as a site of knowledge production authored by coeditor Sherene Seikaly. In her article, Seikaly uses the prism of war to investigate the first two decades of writing Palestine in English and the inextricable connection of that process to class, gender, and other forms of representation. Seikaly’s article, along with a review by Faiq Mari of Francesco Saverio Leopardi’s The Palestinian Left and Its Decline: Loyal Opposition are temporarily free to all readers.

Subscribers will find other topical pieces in this issue, including one by Umayyah Cable on “compulsory Zionism” as a form of cultural hegemony; another by Léopold Lambert on the intertwinement of architecture and carcerality; and a third by Diana Buttu on Israel’s designation and deployment of “terrorism” as a label to silence and defund Palestinian human rights organizations. In addition, the issue features a literary analysis of Adania Shibli’s Minor Detail by Fatima Aamer and an examination of Israeli property regimes and the use of urban planning as a tool of settler-colonial domination by Haim Yacobi and Elya Milner. 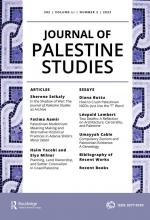