Forty years ago, in 1982, Lebanon was in the midst of a civil war. Rumors of an Israeli invasion reverberated across Beirut, but the people were in doubt.

The end of May brought a hot Mediterranean summer, and my mother decided to enroll me and my sister for the next school year, despite the rumors. A week later, the invasion began.

My father worked at the Summerland Hotel in Jnah and my mother at the BBAC bank in Clemenceau. By the second week of June, Israeli Occupation Forces approached the outskirts of Beirut. My parents barricaded us in our small fifth-floor apartment. My mother was six months pregnant; I was two-and-a-half years old, and my sister was three-and-a-half. The shelling of Beirut continued. Our neighbors scattered into the scarce underground shelters, hunkered down in their apartments, or fled to Syria.

My parents distinctly remember the sound of air raids and naval bombardment, and memories of deafening noises intermingle in a world without chronology.

[My aunt remembers how buildings swayed to the shockwaves of bombardment from the USS New Jersey in December 1983 (activated after its service in the Vietnam War). My mother recalls the 2005 thundering blast that killed Prime Minister Hariri: “the cosmos shook; shattered glass splintered; dust billowed out of the carpets.”]

The Israeli forces continued to bomb West Beirut, before they laid their siege and cut the power and water supply. With East Beirut closed off and the rest of West Beirut destroyed and besieged, my mother recalls acute food shortages. The BBAC bank, where she worked, had installed a new computer system on the second basement floor. Some employees had to sleep there to protect the computer and could only sneak food from Hay el-Sellom, south of the city.

Within a week, Israeli air raids and shelling intensified killing many in Beirut and destroying the Summerland Hotel, where my dad worked. “First thing, we leave to the mountains,” my parents declared. They packed our brown Datsun in haste and escaped the besieged city, amidst one of many ceasefires announced and broken in that bloody June.

We stopped in Aley, where my aunt and grandmother were staying with their cousin. Israeli forces began advancing towards the mountains, so we picked up and drove to Saoufar, my father’s hometown, two days later. We spent 10 days In Saoufar before Israeli and Syrian forces began fighting. Shelling hit our balcony and shattered glass, concrete, and rock. Forty years later today, one cylindrical column still embodies visible traces of the attack.

It was time for us to escape again. The Syrian forces blocked the road to the east where they were stationed in Souk Saoufar. Israeli forces permitted some civilians to escape through their checkpoint to the west in Rwaysat Saoufar: one car per family – leave and do not return.

The Datsun transported us to the Chouf region. Cars queued at another Israeli checkpoint in Nabaa al-Safa. Israeli forces had defeated and replaced the Syrian forces at the Nabaa al-Safa checkpoint. An Israeli soldier approached and asked in an impeccable Levantine mountainous accent, “Are you Druze? Why didn’t you say so?” (إنتو دروز؟ ليش أبتقولوش؟). It appears that he was a Druze himself and had sympathized with my grandmother who had wrapped a white cotton scarf on her head. Somehow, and in complete Lebanese irony, our religious identity was the mercy we were hoping for. He signaled to the ranking officer to let the car pass.

We stayed in Ain Zhalta, my mother’s hometown, for a while. She recalls how my father filled water bottles from fountains and toasted bread to preserve it. My aunt recalls how a tracked Israeli vehicle rammed through the dry-stone wall of my grandfather’s vineyard and cruelly smashed our treasured vines (funnily enough, the Israelis named their 1996 assault on Lebanon after Steinbeck’s Grapes of Wrath). 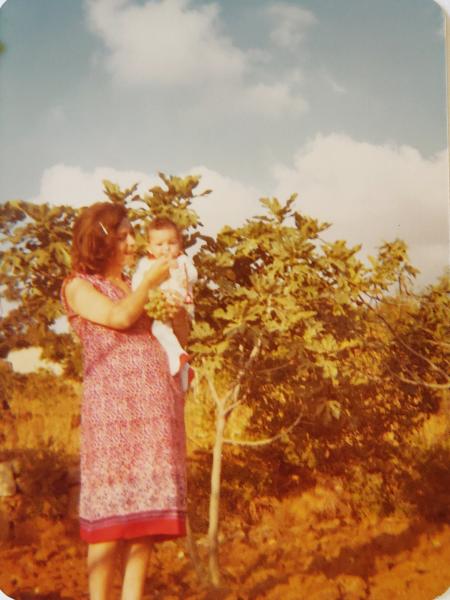 My mother holding me in my grandfather’s vineyard a couple of months before the Israeli invasion rammed its vehicles into the land. She is pregnant with my younger sister while I nibble on grapes in front of the fig trees.

Coming back to Saoufar, my parents tried to negotiate to cross the Israeli checkpoint in Rwaysat. The Israeli soldier did not speak Arabic. His fellow right-wing Lebanese militiaman looked at my pregnant mother and exclaimed, “This guy has no empathy. Can’t you see how stupid he is?!” (هيدا واحد ما بيفهم. ما شيفتيه، واحد تيس ما بيرد). Eventually, we were allowed to cross.

We returned to Beirut after a month and a half. My mother and aunt recall how our car drove over the asphalt and concrete debris from the air raids and artillery shelling next to the Sports City Stadium in Bir Hasan.

[Again, memories of the invasion intermingle. My aunt recalls what seems like a hazy dream: women and men chaotically running in the streets, panicking, fleeing. My father was driving her home from work in Hazmieh and took a shortcut through el-Ghobeiri and Tariq el-Jdideh. Later that day, they learn the horrors of the Sabra and Shatila massacre.]

[In my recent doctoral research, I found myself reading a most peculiar empirical source for an urbanist and a Lebanese. A 1999 intelligence report of the US Marines and a 2006 field manual of the US Army analyzed, as case studies and lessons learned, how the Israeli invasion dominated the Lebanese landscape. A reductionist narrative and deadly epistemology of Beirut as a case study and lessons learned for the doctrine of urban warfare. It made me think how the countless stories like that of my parents constitute a counter epistemology of care, decency, and survival across the extended urban landscape.]

Everyone in the car is silent, grappling with fear, anxiety, and anticipation. A flat tire brings the Datsun to a halt. Israeli sniping whizzes by, trying to scare the stopped car. A cosmic connection unfolds: a car stops to help - it turns out to be our neighbor’s brother in Beirut. His car tows ours, and we get back to our fifth-floor apartment facing the Mediterranean in the distance.

Author's Note: I am grateful to my mother, aunt, and late father for their tenacious care throughout the Invasion and Civil War in Lebanon, and for agreeing to share their story and photograph. Lebanon War, 1982 | Interactive Encyclopedia of the Palestine Question
Highlight - A Setback for the PLO and for Israel's 'Grand Design' - The 1982 Lebanon War was a...
www.palquest.org

Lebanon War, 1982 (1982 - 1983) | Interactive Encyclopedia of the Palestine Question
Thematic Chronology - Traces the beginning of the Israeli invasion of Lebanon (allegedly to destroy...
www.palquest.org