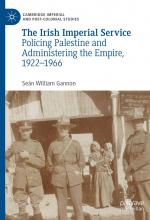 In this review of The Irish Imperial Service: Policing Palestine and Administering the Empire, 1922– 1966 by Seán William Gannon, Mahon Murphy discusses the book’s relevance for studies of Palestine and how British policing policy developed there impacting practice in the British Empire as a whole. The creation of the Irish Free State in 1922 created a rupture in Ireland’s relationship with the British Empire and Irish imperial activity. Nonetheless, contacts and entanglements of Irish people with the administration of the British Empire continued through to the 1960s. Between 1922 and 1966 when the British Colonial Office closed, Irish men and women were continuously recruited into Britain’s imperial civil services, thus maintaining a significant Irish presence in the governing of empire. The majority of these Irish colonial servants were assimilated into Britain’s imperial ruling caste and their attitudes toward anti-colonialists in Africa and Asia were no different from those of their British counterparts. This book, with Mandatory Palestine as its base, makes an important contribution to the discussion of the complex relationship of Irish nationalist attitudes and the British Empire.