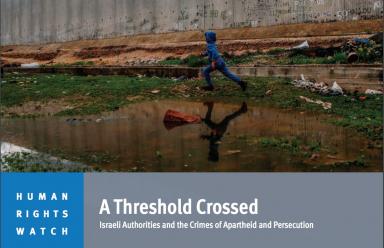 On 30 November 2020, Institute for Palestine Studies (IPS) entered a partnership with Against Apartheid and Racial Discrimination (AARDi) to implement a joint project to create “A Comprehensive Information Portal on Israeli Apartheid”. The project aims to create an integrated database on Israeli Apartheid, conduct relevant research and cognitive studies on the matter, and raise awareness about its nature and impact.

On 27 April 2021, Human Rights Watch (HRW) launched its report “A Threshold Crossed: Israeli Authorities and the Crimes of Apartheid and Persecution”. In introducing the report, HRW watch writes:

“Across these areas and in most aspects of life, Israeli authorities methodically privilege Jewish Israelis and discriminate against Palestinians. Laws, policies, and statements by leading Israeli officials make plain that the objective of maintaining Jewish Israeli control over demographics, political power, and land has long guided government policy. In pursuit of this goal, authorities have dispossessed, confined, forcibly separated, and subjugated Palestinians by virtue of their identity to varying degrees of intensity. In certain areas, as described in this report, these deprivations are so severe that they amount to the crimes against humanity of apartheid and persecution.”

The Webinar, organized by IPS and AARDi, aims at discussing the findings of HRW report, especially considering recent crimes and atrocities Israel is committing throughout the areas that the report covers.

Akshaya Kumar is the Director of Crisis Advocacy at Human Rights Watch. She oversees the organization’s advocacy response to emergencies and develops innovative strategies to respond to evolving crises. Kumar joined HRW as Deputy United Nations Director in 2015 and represented the organization at UN headquarters in New York for four years. She previously worked at the Enough Project where she helped launch The Sentry, an initiative that seeks to freeze war criminals out of the international financial system. She is a term member of the Council on Foreign Relations. Akshaya holds a JD from Columbia University and an LLM in human rights, conflict and justice from the School of Oriental and African Studies. She speaks Tamil, Hindi, Spanish, Arabic and English.

Sahar Francis: Since 2006, Sahar Francis has been the General Director of Ramallah-based Addameer Prisoner Support and Human Rights Association, a Palestinian NGO providing legal and advocacy support to Palestinian political prisoners in Israeli and Palestinian prisons. An attorney by training, she joined the association in 1998, first as a human rights lawyer, then as head of the Legal Unit. With over twenty years of human rights experience, including human rights counseling and representation, Ms. Francis also was on the Board of Defence for Children International – Palestine Section for 4 years, and in the Board of the Union of Agricultural Work Committees.
Sahar did her practice on Human Rights in the Society of Saint Yves in Jerusalem, on issues of Land confiscations, house demolitions, labor rights and freedom of movement.On 1997 worked in Badil Refugee Rights Center, in the legal unit.
Sahar did her masters in International Studies at Bir Zeit University, and her Law degree at Haifa University.

Munir Fakher Eldin (moderator): Fakher Eldin teaches philosophy and cultural studies at Birzeit University, where he directs the MA program in Israeli Studies. He is also a research fellow at the Institute for Palestine Studies, Ramallah. His research interests and publications focus on the history of landed property, colonialism and social history and politics in 20th century Palestine and Syria. His most recent publication is a co-edited volume, The General Survey of Israel 2020, published by IPS (2020/2021).