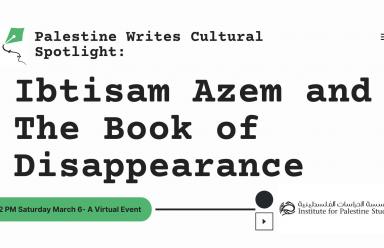 The Institute for Palestine Studies is co-hosting the first cultural spotlight initiative by Palestine Writes which is designed to showcase cultural production relevant to Palestine.

The event features Palestinian novelist Ibtisam Azem discussing her second novel, The Book of Disappearance, translated from Arabic to English. The event will be moderated by Laura Albast of the Institute for Palestine Studies in Washington, DC.

What if all the Palestinians in Israel simply disappeared one day? What would happen next? How would Israelis react? These unsettling questions are posed in Azem’s powerfully imaginative novel. Set in contemporary Tel Aviv forty eight hours after Israelis discover all their Palestinian neighbors have vanished, the story unfolds through alternating narrators, Alaa, a young Palestinian man who converses with his dead grandmother in the journal he left behind when he disappeared, and his Jewish neighbor, Ariel, a journalist struggling to understand the traumatic event. Through these perspectives, the novel stages a confrontation between two memories. Ariel is a liberal Zionist who is critical of the military occupation of the West Bank and Gaza, but nevertheless believes in Israel’s project and its national myth. Alaa is haunted by his grandmother’s memories of being displaced from Jaffa and becoming a refugee in her homeland. Ariel’s search for clues to the secret of the collective disappearance and his reaction to it intimately reveal the fissures at the heart of the Palestinian question.

The Book of Disappearance grapples with both the memory of loss and the loss of memory for the Palestinians. Presenting a narrative that is often marginalized, Antoon’s translation of the critically acclaimed Arabic novel invites English readers into the complex lives of Palestinians living in Israel.

You can find the book in English here and in Arabic here.

Ibtisam Azem (author): is a Palestinian novelist, and journalist. She was born and grew up in Taybat al-Mothalath, northern Jaffa. She holds an M.A. in Islamic Studies, with minors in German and English Literature from Freiburg University, Germany. She holds another M.A. in Social Work from NYU. She works as a senior correspondent covering the United Nations in NYC for the Arabic daily al-Araby al-Jadeed. She is also co-editor at Jadaliyya e-zine.

She has published two novels in Arabic; “The Sleep Thief: Gharib Haifawi” (Sariq al-Nawm; Gharib Haifawi) (Beirut: Dar al-Jamal, 2010) and “The Book of Disappearance”(Sifr al-Ikhtifa) (Beirut: Dar al-Jamal, 2014). It was translated into English by Sinan Antoon and published by Syracuse University Press in July 2019. It was chosen as the 2020 title for Librarians and Archivists with Palestine’s international reading campaign, “One Book, Many Communities.” Excerpts of Azem’s writings have been published in French, German, English, Dutch, and have appeared in several anthologies and journals. She is working on a collection of short stories.

Laura Albast (moderator): is the Communications and Digital Media manager at the Institute for Palestine Studies in Washington, DC. Her research and translations have focused on public diplomacy, community health work, and media governance in the Middle East. Her work has appeared in The New Arab, Bloomberg Businessweek, and the Arab American News. She has poetry published in Sekka magazine and in the 5th Ghassan Kanafani Anthology. 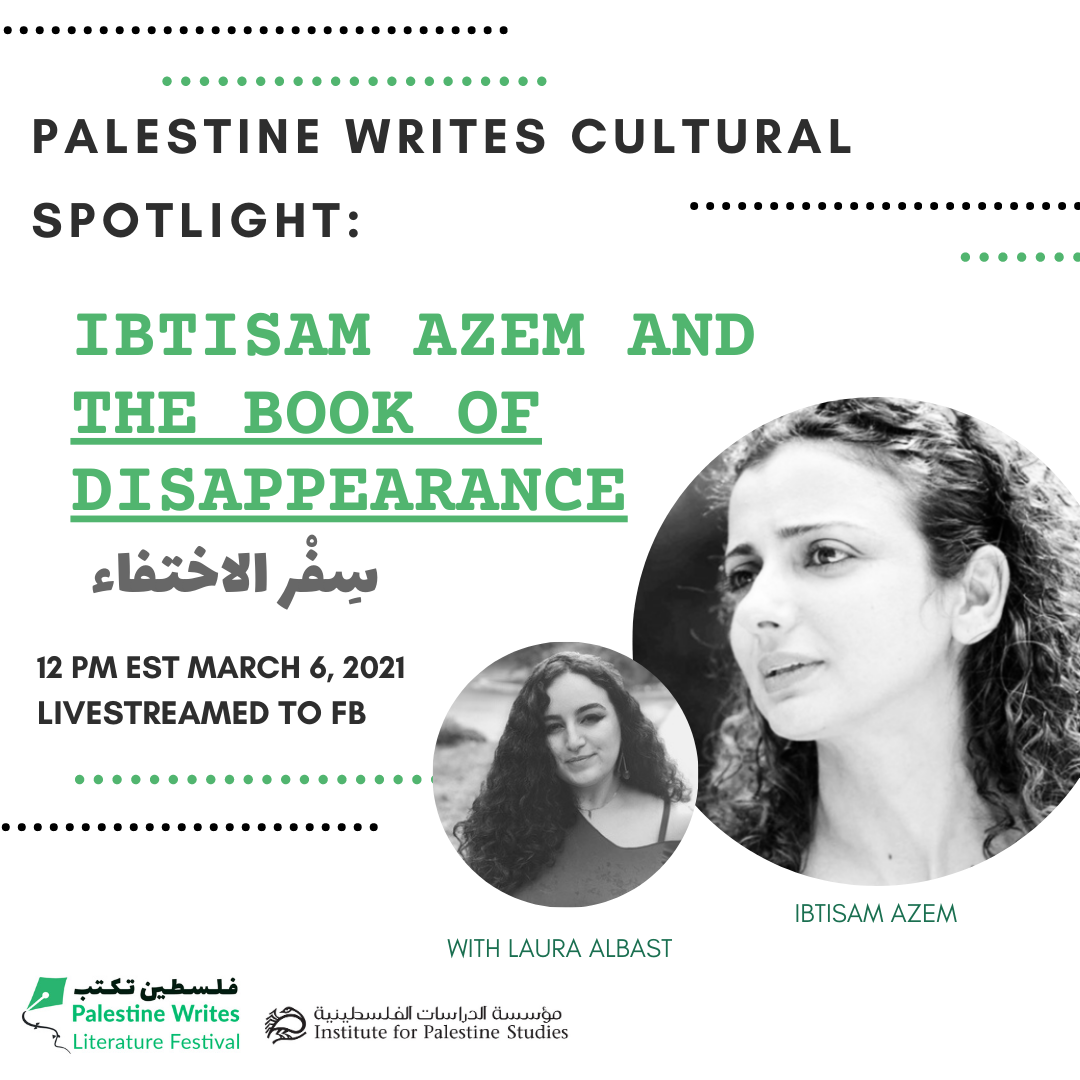